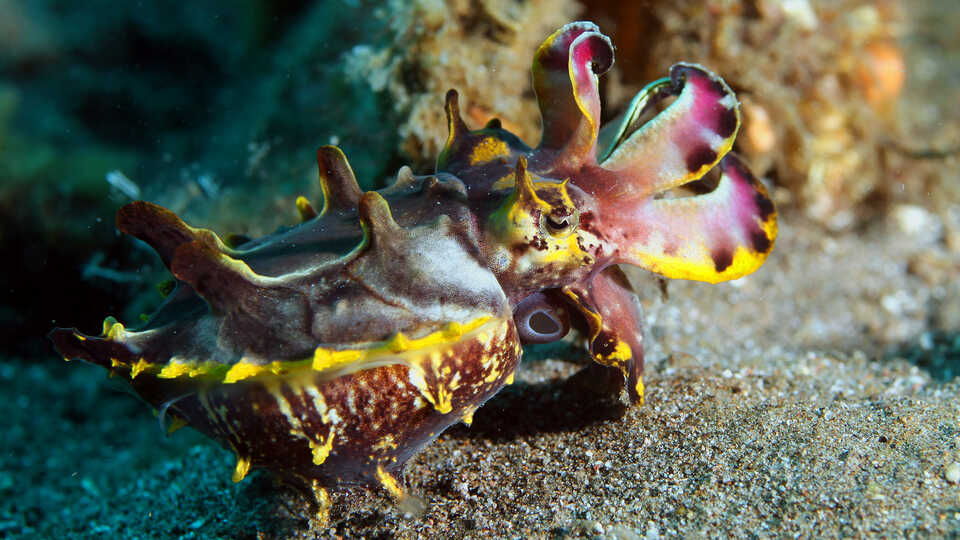 Is it animal or digital? With its pulsating color displays and unusual habit of "walking" on its arms, the flamboyant cuttlefish is one of the aquarium's most captivating species—and a hot commodity among collectors. By breeding these cephalopods at the Academy, we're helping reduce the demand for specimens taken from the wild.

By mastering Metasepia's life cycle, we’re also contributing vital data to the scholarship around this mysterious species—which may help sustain it in the future.

Aquarium Senior Biologist Rich Ross had a breeding breakthrough in July 2017 after a discouraging dry spell. Since then, Rich and his team have successfully hatched many broods of healthy Metasepia.

What's the recipe for reproduction? It starts with setting the mood.

Mating is a meeting of minds. Almost literally: Metasepia mate by joining head to head. The male uses a special tentacle to slip a sperm packet under the female’s mantle, where she stores it until she's ready to fertilize her eggs.

Harvest, hatch, and repeat. The female will lay 5-25 fertilized eggs, which are carefully collected by a biologist and transferred to an egg tumbler, where they will hatch after about a month. This sequence allows the female to continue breeding rather than guard her eggs—an arduous effort for a species that usually only lives for about 16 months.

From hatchlings to hunters. As soon as it hatches, a flamboyant cuttlefish's killer instincts kick in—and biologists' jobs get trickier. If too many mysid shrimp (their preferred prey) are introduced, the cuttlefish become stressed trying to choose their victims; too few, and they expend precious energy trying to find them. Biologists closely monitor hatchlings for their first three weeks—a critical milestone that, once surpassed, generally bodes well for the cuttlefish's future.

After about three weeks, the baby cuttles graduate to larger prey and are ready to go on exhibit—and practice the art of cephalopod seduction.

Where Can I See It?

Our flamboyant cuttlefish are tucked away in the "Hidden Reef" exhibit in the Steinhart Aquarium. 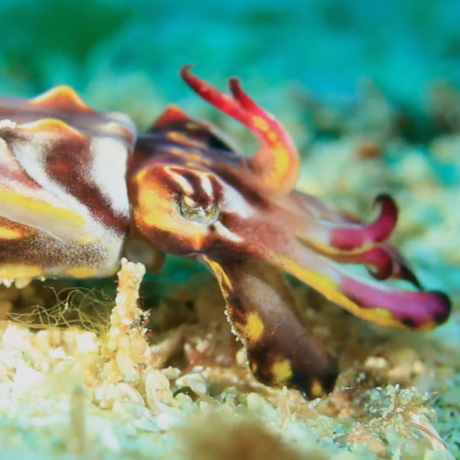 Colorful Cephalopods
Learn how and why cephalopods like octopuses, squid, and cuttlefish change colors.
Breeding Programs

The Academy's breeding programs help contribute to Species Survival Plans and critical conservation efforts all over the world.

Sucker for cephalopods? Our new Giphy channel is the moving menagerie you've been waiting for.