Diseases can have significant effects on bird populations, especially populations that have never been exposed to them. Avian pox is a disease that was presumably moved around by humans, and has been introduced to Galapagos – as well as Hawaii – where the disease has had a significant effect on birds.

Recent work by Patty Parker (from University of Missouri) and her team of researchers has learned where the pox came from, where and when it was introduced, and some details about how it spread across the archipelago. In CSI style, they visited collections (especially ours here at California Academy of Sciences), and examined literally thousands of birds that have been collected over the last century and that are now held in public research collections.

Every bird in the collection has a label that includes information on where and when the bird was collected, and by whom. By looking for external pox lesions, they could get a rough estimate of which birds had pox, where and when. 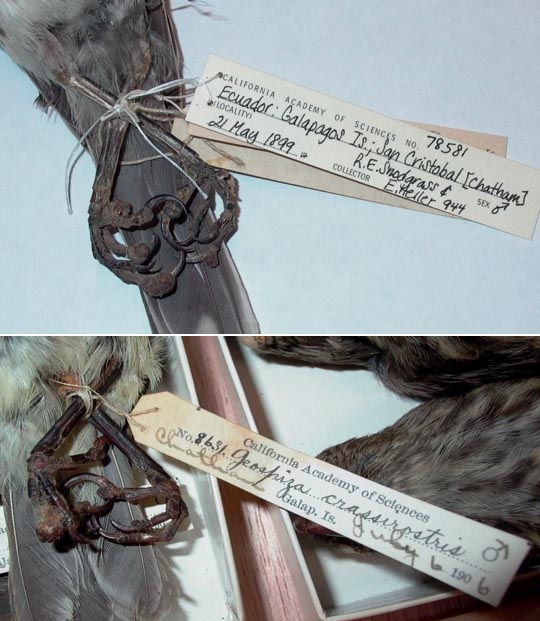 (This photo shows pox lesions preserved in 100-year old specimens collected on the Galapagos during the 1899 Snodgrass and Heller Expedition and the 1905-06 California Academy of Sciences Expedition).

But they didn’t stop there – on birds with large lesions or multiple lesions, they used tiny scalpel blades and cut minute pieces off the lesions. These tissue samples were then used to confirm that the disease was actually pox. Two techniques were employed – first, they did histopathology studies (basically looking at the lesions under a microscope to confirm their external appearance as pox-like), and second, they extracted DNA and amplified and sequenced poxvirus DNA. Together, these two tests not only confirmed pox as the culprit, they actually identified the pox strain as being nearly identical to known strains of Canary Pox.

Canarypox virus (CNVP) is a form of avipoxvirus that attacks wild and captive passerine birds, and can cause significant mortality. It is double-stranded DNA virus in the family Poxviridae. Externally, it causes lesions on feet, head, bill, and around the eyes, and can impede sight, feeding, and movement. It can also affect respiratory and digestive tracts inhibiting breathing and digestion. Because the virus contains a double-stranded DNA molecule as genetic material, it is hardy enough to persist in the environment longer than many other viruses.

Check out their full research article at PLoS One