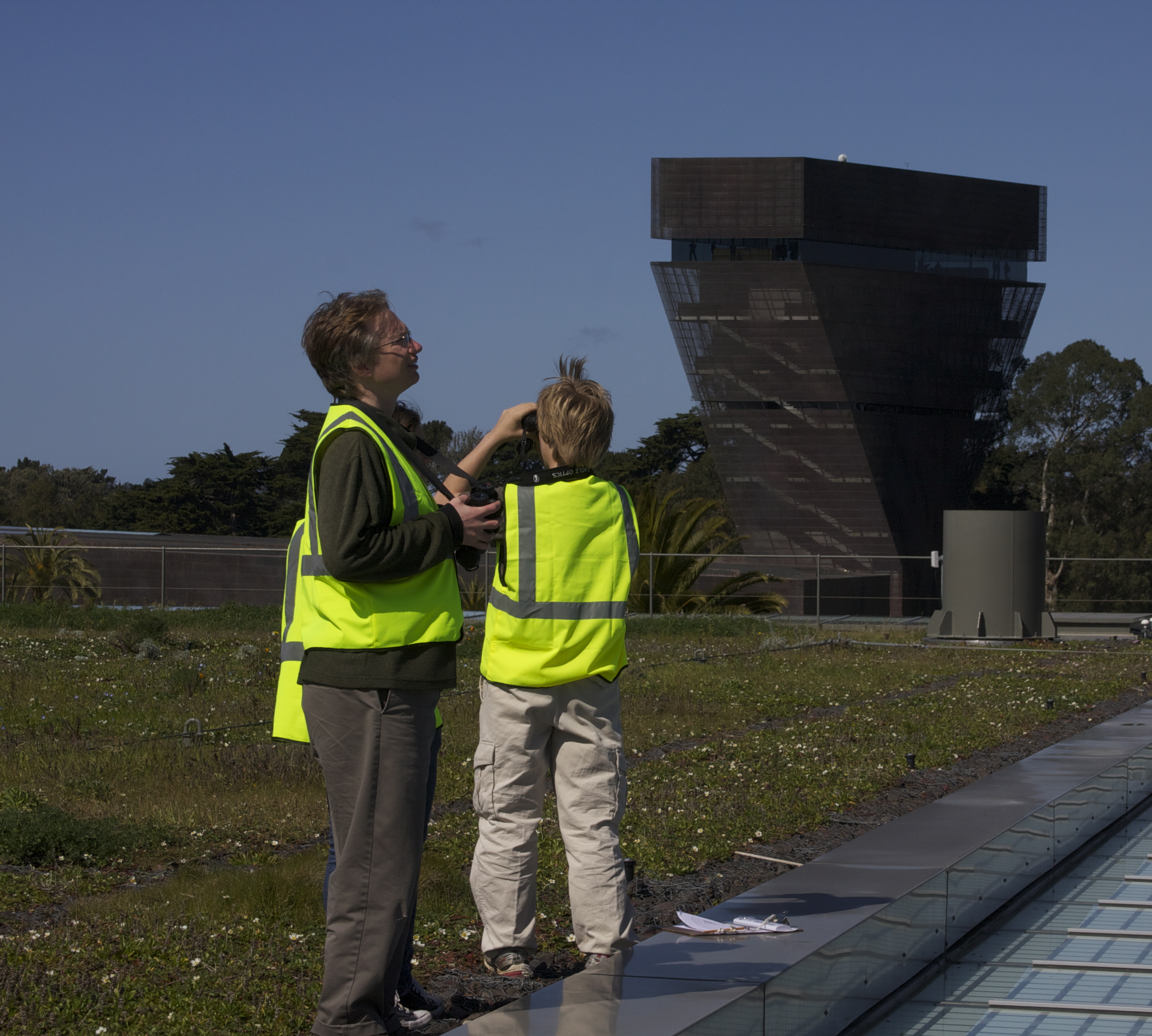 “What’s our time?” Logan asks moving along the rock paths that crisscross the roof of the CAS. “Two minutes.” Ore, a graduate student, checks his stopwatch. It’s raining and cold and my second bird survey experience has been unexpectedly lucrative. Half an hour earlier, winding our way through the halls of the research department, I was expecting 30 wet minutes of cloud spotting. Up on the roof in our yellow vests, the team, shielding our binoculars from the downpour, noted the temperature, weather, and wind direction. Logan was already looking around. ‘Can we start yet?’ his impatient hands said as he waited for Ore to set the timer. As soon as Ore gave the go ahead, Logan, a fourteen-year-old volunteer and bird expert, was leading us around the roof spewing names of bird species too fast for me to document. We moved in a line, with Logan in the front shouting numbers, species, and the species codes of the birds he saw and heard. “It’s actually prime season for bird watching,” Logan explained to me later as he typed in the day’s data. “Lots of spring arrivals and the gulls haven’t left yet. Twenty one species, could have been twenty three if we hadn’t run out of time; good diversity.” He nods. Just seconds after the clock had run out, Logan had pointed straight up, shouting, “Oh man, that was a Mew Gull.” He shook his head, disappointed, and headed off the roof. Once the survey is over no additional birds can be added to the day’s data. Ore has Logan name all the gulls; he knows the group particularly well. “Gulls, I love them.” Logan laughs and explains that they are a very over-looked group with a lot of rarities. After a little over a year of conducting the Tuesday morning roof surveys, the CAS team is very familiar with the local birds. I was shocked to see two pairs of Red-tailed Hawks circling the area. Ore pointed to some tall pines, “Oh, that pair of Red-tailed Hawks nest in those trees over there.” The birds were behaving differently in the rain, a lot more vocally active and many were using the roof for shelter. As we made our way around the Dr. Seuss-like domes we heard three Downy Woodpeckers call. 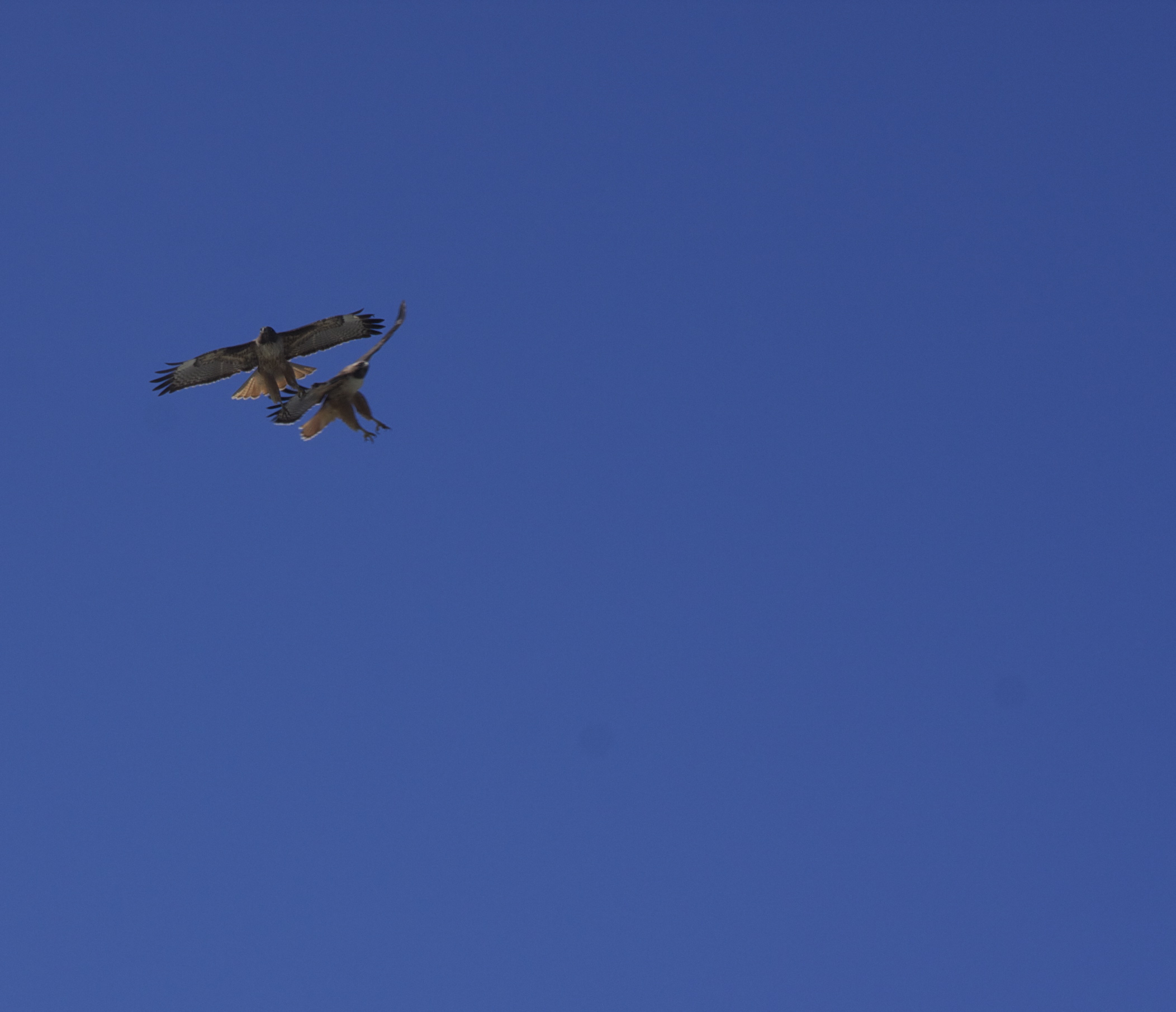 Moe Flannery, the collections manager of the Ornithology and Mammalogy department, started the roof survey to learn which bird species were   utilizing the green roof. The data collected by the CAS team is posted on eBird, an international bird sighting website, used by birders around the world. The survey has shown that the CAS building has, in many ways, been successfully integrated into the park environment and the green roof is a      huge part of that effort. The roof has provided important winter habitat for migrating birds resting and feeding. Last winter a flock of seventy plus  Kildeer made use of the green roof for at least three weeks. Kildeer need big open areas of vegetation and seemed quite content in Golden Gate   Park. Recently, the team spotted an Oregon Junco flying with nesting material, exciting evidence that the Juncos are back to nest on the roof for a third year. Oregon Juncos are ground nesters and the roof provides a safe haven from predators and people that also occupy the park. In line with the mission of the CAS to explore, explain and protect, the survey team continues to monitor action on the roof, not just to share information about our local bird species, but also because of their commitment to improve the world we live in. - Page McCargo