Traditional sailing proas still sail around remote Milne Bay, much as they have for centuries. I’ve heard about this from colleagues and have seen some small sailing canoes off Normanby Island on previous trips, but I was dying to see some of these boats up close and learn more about the traditional sailors. This blog is devoted to a bit of anthropology, and specifically the skills of sailing and boatbuilding that are so well developed - and preserved - in the region. 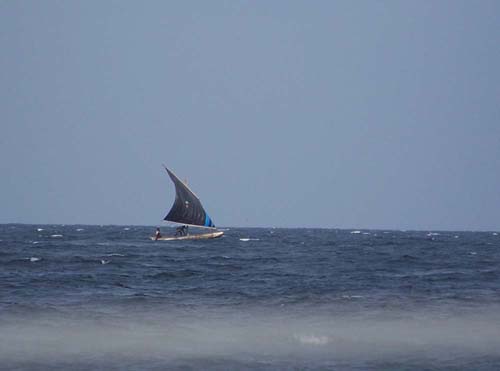 We saw our first sailing canoe tacking off Byron Island on our way to TubeTube Island. The boat was beautiful, and the sailors seemed at home on the water, but it was still far away and difficult to see how they were sailing. 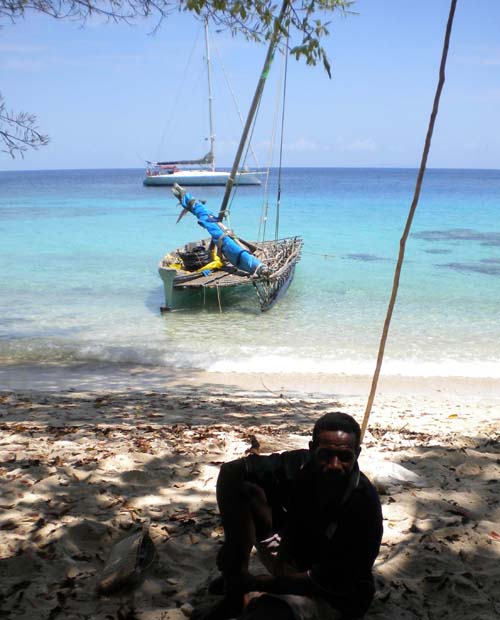 On TubeTube Island, we saw our first sailing proa up close. The boat had several men who had been to Alotau, and were on their way back to their village with supplies purchased from town. While they were on shore resting, they peddled some beetle nut. 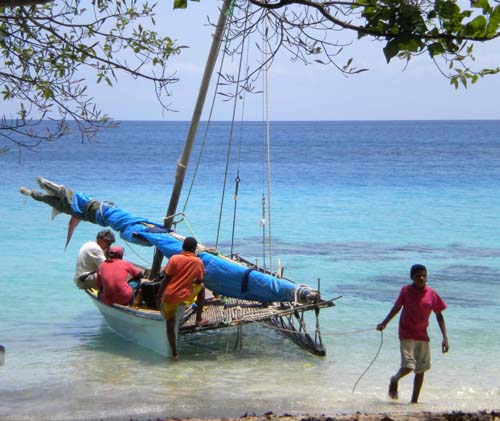 Bruno talked to the sailors, and they gave him a quick tour of the boat. They introduced us to the parts of the boat and showed us how they sailed it. 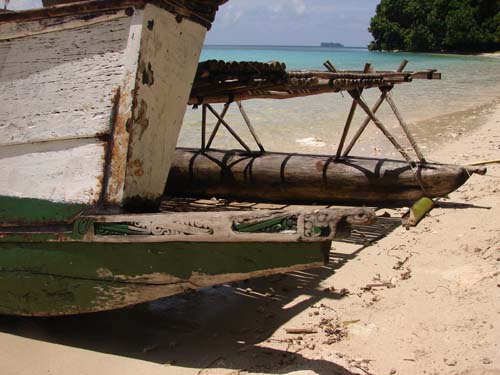 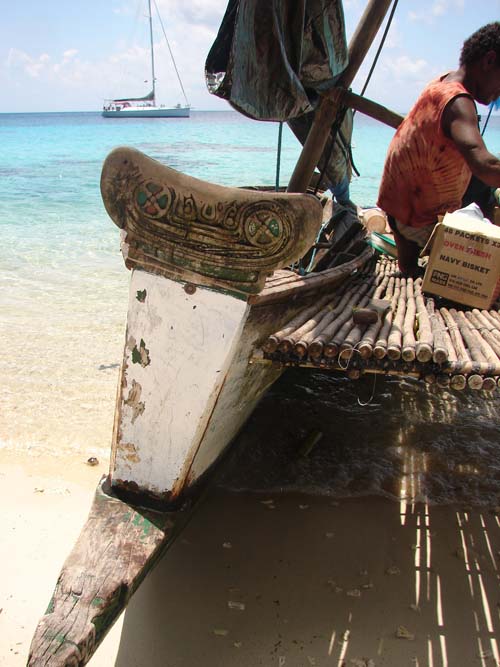 The boat had incredible detail in the bow and stern plates and nice carvings on the hull. The rigging used modern ropes and plastic for sails, but otherwise the structure followed the traditional local sailing rig. 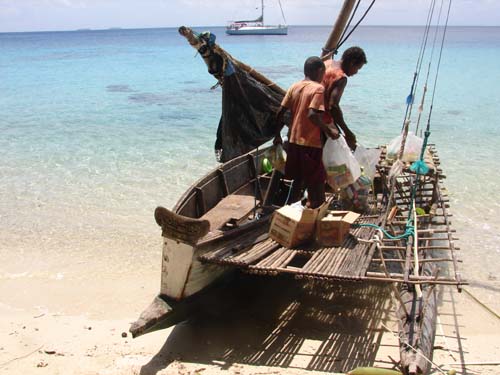 Later, they loaded trade store goods on the boat, opened the sail and headed off. 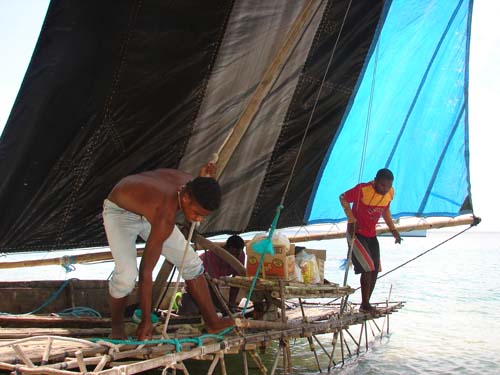 Once they set sail, it was obvious that it takes tremendous knowledge and skill to rig these boats. Although it may look like these are cheap plastic tarps tacked together, the stitching and shaping of the sail are highly engineered for strength and performance. The sail is carefully shaped, and sewn to maintain proper sail shape. Ropes are sewn into the sail margins so that they can be lashed to spars and raised and lowered. 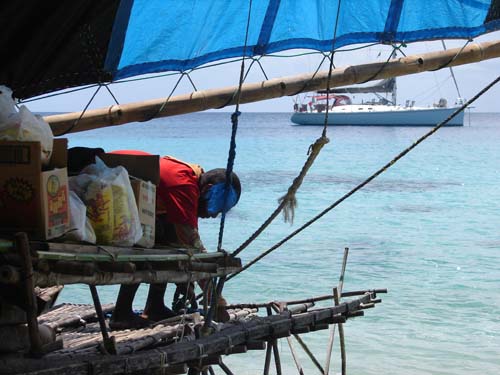 Here you can see some of the sewing and lashing on the foot of the sail. We had little time with these folks before they were on their way, but we were headed to the islands of Panapompom and Panaete, where boatbuilding was their main craft. These islands built and supplied most of the finest sailing boats used in this part of Milne Bay Province, and we were excited to see more of these boats in Panapompom. 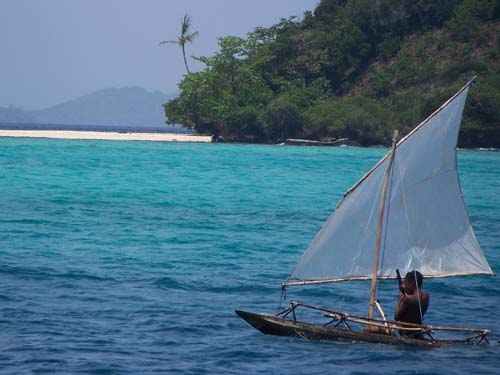 On our way east toward Panapompom Island, we worked on the islands of Hummock and Haszard, and we anchored in their lagoon. Here we also encountered many sailors, including young boys who sailed smaller, single-boy versions of the larger sailing canoes. 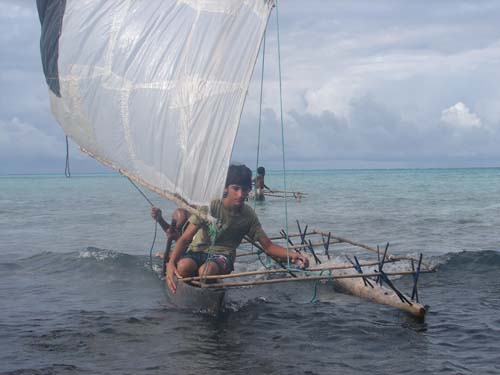 Aladin went for a spin on some of these small canoes. Aladin has been building boats since he was a toddler, and so he exchanged notes with the local young sailors on design and technique. 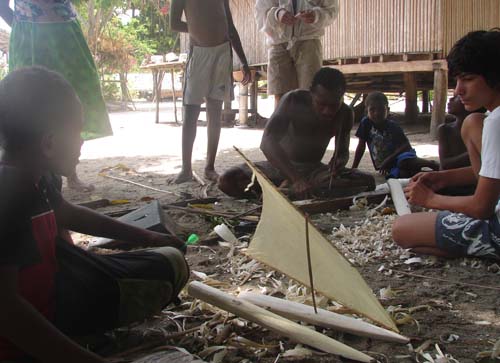 The men and boys of Hummock Island also build and test scale models of their sailing canoes, as does Aladin. They worked together with models as well as larger sailing canoes. At times like these I wished that I wasn't so busy with the biological research, and I wished that I had more time to learn and write about the local sailing knowledge. 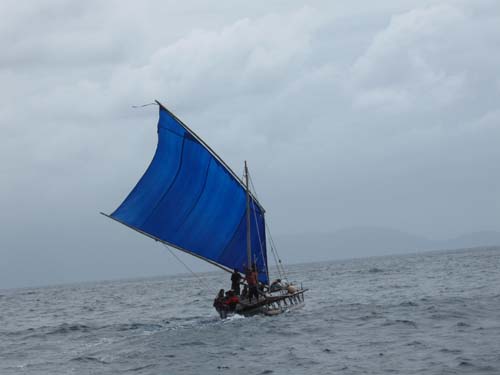 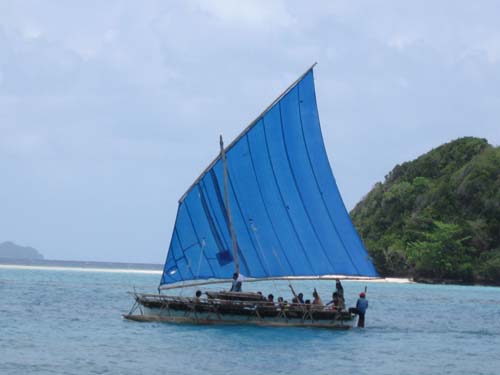 As we pressed eastward, we saw more and more sailing canoes, some larger, some with many passengers, and some with slightly different designs. 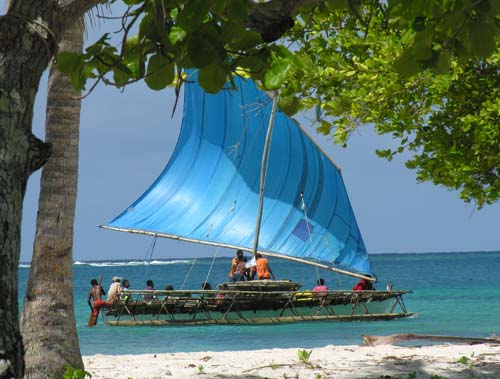 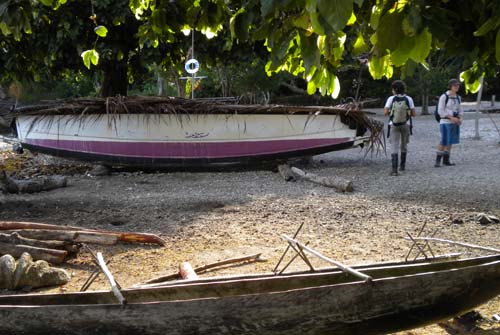 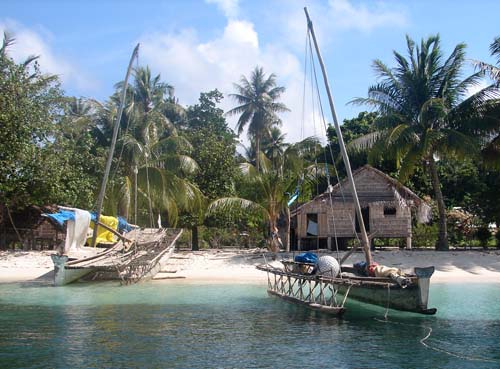 We sailed to Panapompom in early November. Our main goal was, of course, to study the birds of the Deboyne Island Group, but we were all excited to be in the archipelago of the great sailing canoe architects and builders. The lagoon between Panapompom and Panaete is very shallow near Panaete - too shallow for Dalai, which has a 2.5 meter draft - so we anchored off the northeast side of Panapompom Island. This was an excellent decision for the birds, as Panapompom Island was higher and had more variation in habitats and geology, so there were many diverse birds. And we were close to Panaete - just a short sailing canoe ride away. While we studied birds, Bruno and Aladin studied canoe-building with some of the knowledgeable men, and they sailed to Panaete to meet some of the other builders. The photos that follow were taken by Bruno and Aladin during their sail to Panaete on a sailing canoe. 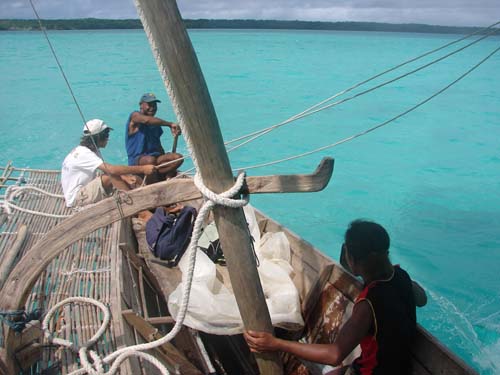 They sailed with Jimmy, one of our hired helpers, but also a master sail-stitcher and sailor. They raised and lowered the sail, and showed Bruno and Aladin how to use the steering board rudder at the stern to steer the canoe. 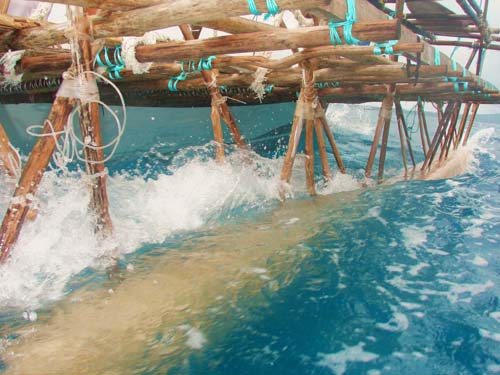 The water in the lagoon was crystal clear, so it was easy to see the coral and rocks under the surface. The sailing canoes had a shallow draft, so it was easy to avoid hazards, and they were able to move very quickly through the water. 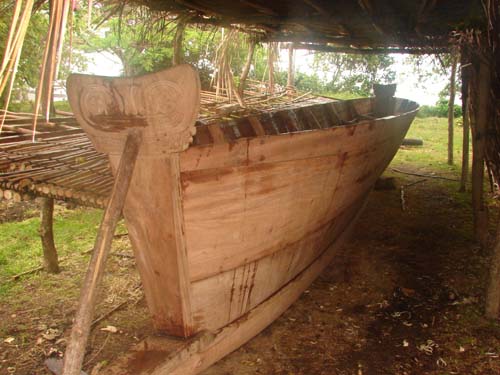 Once on Panaete, they visited several boat builders and saw boats in the process of construction, such as this one that is nearly completed. 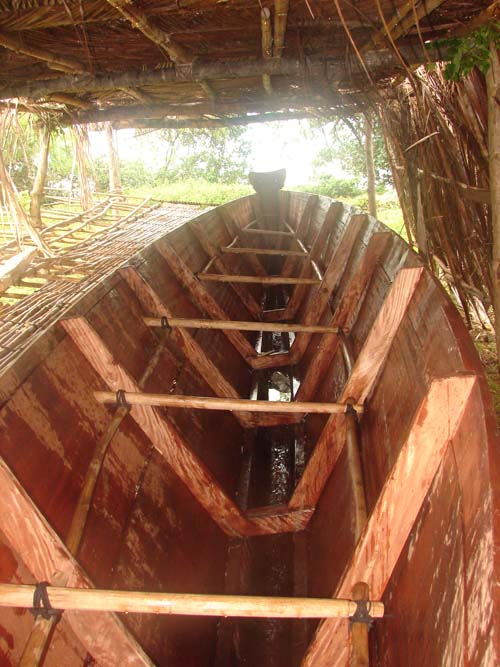 It is quite easy to see that these are not merely dugout canoes. The bottom of the hull is constructed of a dug-out tree trunk, and a particularly strong wood is chosen for this. Then side planking is added for extra buoyancy and to protect the boat in heavy seas, and internal reinforcements are needed to secure these parts to the bottom of the hull. In earlier times, all of the pieces would be carved to fit exactly and then lashed together with fiber ropes. 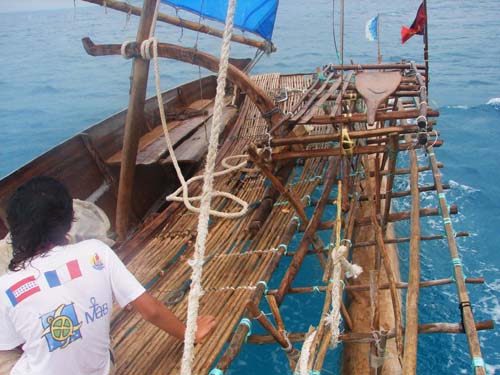 The outrigger is made of a heavy solid wood that can counterbalance the force of the wind on the sail. The canoe always tacks with the outrigger on the windward side of the boat. The decking is made of wooden saplings or bamboo, and can be made thick enough to support a lot of cargo or people, as needed. The mast rests at the bottom of the main hull and is supported off a large armature that spreads the force over the decking platform. 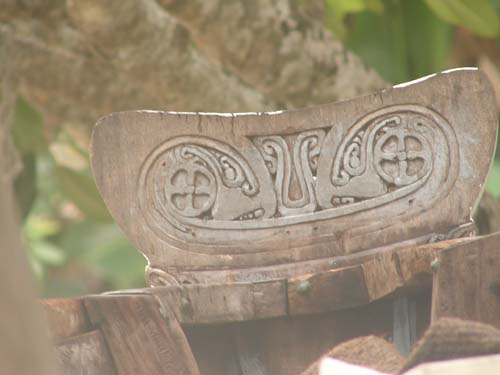 Although every part of the sailing canoe was functional in some way, some parts were elaborated decorated and embellished with carvings like this bow or stern plate. Bruno also worked with Jimmy and the boat builders to photograph and record the names of many of the ship's parts. Like sailors anywhere in the world, the New Guineans had specialized names for every part of the boat. 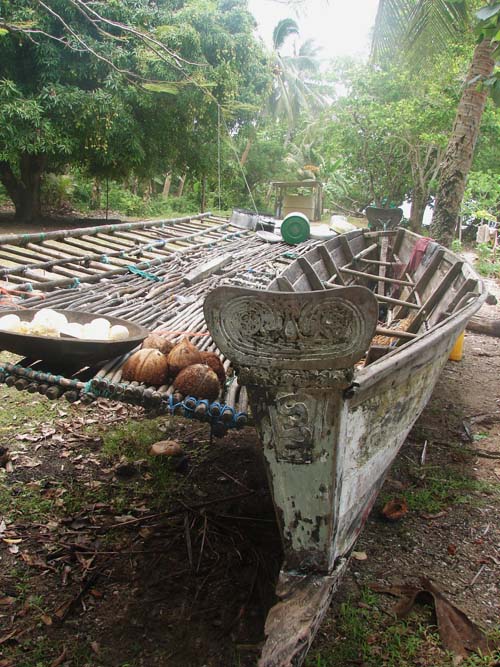 Once back on Panapompom, on our last evening we tried to visit one of the boat builders living there who was famous for building small replicas of the large sailing canoes. 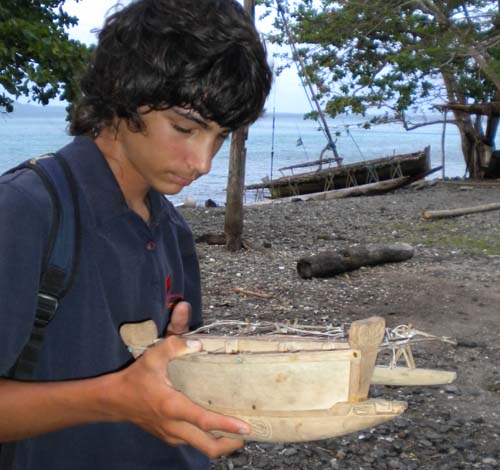 These little boats were only a few inches long, but they had every functional working part of the larger boats. We weren't lucky enough to find the model-maker (he was out working in his fields) but we did get to see one of his small models. 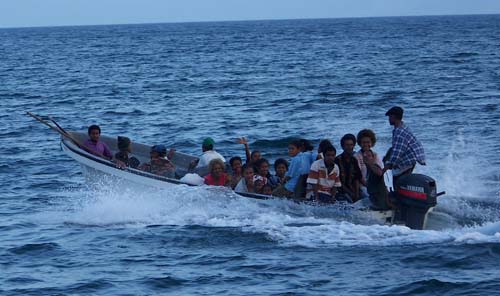 Increasingly, these sailing canoes are being replaced by fiberglass boats with 40-50 horsepower engines, like this standard commuter boat. One can only wonder how many more years the traditional sailing canoes will be used. Throughout the Pacific, very few islands or island groups still use the traditional sailing canoes. The next time I come to these islands I would love to try to make a documentary film about these amazing seafaring people and try to record some of this knowledge before it is lost.