Tipping the Biosphere Part III: A Tipping Point for Earth? 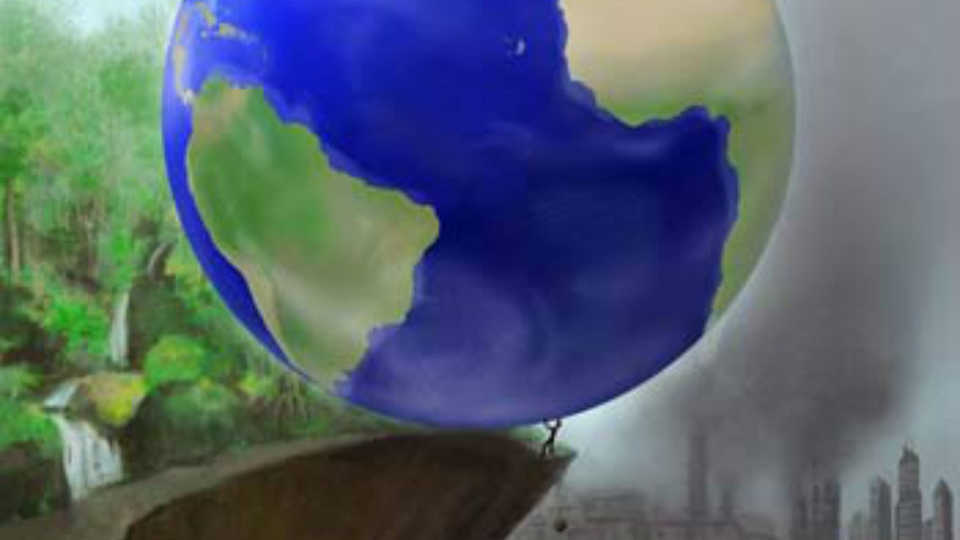 This is the third installment of my essay, Tipping the Biosphere. Part II.

"Tipping point" has become a part of modern jargon, referring to a sudden change in the state of a system (e.g. an explosive disease outbreak) in response to an external driving force (or "control parameter" in scientific jargon). There is a considerable body of mathematics underlying this jargon, and we can identify four key features of systems that possess tipping points.

First, the driving force can be applied incrementally over a broad range of intensities and result in little change to the system. This can be caused by a natural resistance of the system to change, or resiliency so that after being disturbed the system returns to its pre-disturbance state.

Second, there is a point at which the next incremental change of the controlling parameter results in a significant change in the system's state. The straw has broken the camel's back and the system "tipped". Response to the driving force changed either because the intensity of the driver can now overcome the internal resistance or resiliency of the system, or had eroded it incrementally, setting in motion previously inert or insignificant processes. Alternatively, the intensity of the driver can be reduced to a point where internal processes become more effective controllers, rendering the driver ineffective.

Third, the intensity of the disturbance at which the system tips differs according to whether intensity is increasing or decreasing. In other words, if you added 10 kg to tip your scale, you would have to remove more than 10 kg to regain balance!

Finally, two similar states can nevertheless be divergent in their responses, i.e. are sensitive to initial conditions. Tipping points in many physical systems are well understood and find application in physics and engineering. In other real-life situations with apparent tipping points, however, such as disease outbreaks, or socio-political upheavals, analysis is more difficult. Difficulties stem from an incomplete identification and understanding of the driving factors, limits on the precision with which those factors can be measured, and complex interactions among multiple drivers and the system's state. Therefore, when change occurs, it often surprises.

Why then do some scientists argue that the biosphere is approaching a tipping point? Specifically, why identify population size and resource consumption as controlling parameters? Because the effective drivers that result from those parameters, e.g. climate change and ecosystem disruption, have caused biosphere transitions in the past, and are themselves capable of dramatic transitions. For example, there is considerable concern that the consequences of ongoing global warming will be manifested as sudden shifts in climatic regimes rather than gradual transitions[7]. Climate change in the geologic past altered the biosphere in diverse ways, including extinctions and outbursts of evolutionary diversification. Another agent of ancient biosphere transformation was planetary or ecosystem primary productivity. Primary productivity is the energy converted to food by plants and other photosynthesizers. Large increases of primary production in the past, fertilized by various processes such as volcanism, were associated with increases of biological richness and ecological diversity. Large disruptions or decreases of this energy supply, however, linked to events such as asteroid impacts, climate change and oceanographic changes, are associated with regional to global ecological collapses and extinctions[8].

Humans today utilize or influence 24-41% of global primary production through the agricultural cultivation of a rather low diversity of species and the direct utilization or alteration of productive terrestrial systems[9,10]. In the oceans, where microscopic organisms are responsible for up to 50% of the Earth's primary production, there is growing concern about the effects of increasing ocean temperatures and acidity. More directly, when we reduce the amount of space available to species or biological communities, or reduce the connectivity among those spaces, the result is extinction or community collapse. Thus, despite difficulties inherent to predicting tipping points in a system as complex as the global biosphere, there is sufficient evidence at both long time scales and small spatial scales that the biosphere is capable of such transitions, and sufficient reason to be concerned.

An important question then is, as we increase the amount of the biosphere affected by humans, will local and regional collapses interact synergistically to result in global collapse? Counterintuitively, potential solutions emerge when we acknowledge the fundamental roles of human population size and resource consumption.