This is the fifth and final installment of my essay, Tipping the Biosphere. Part II. Part III. Part IV. 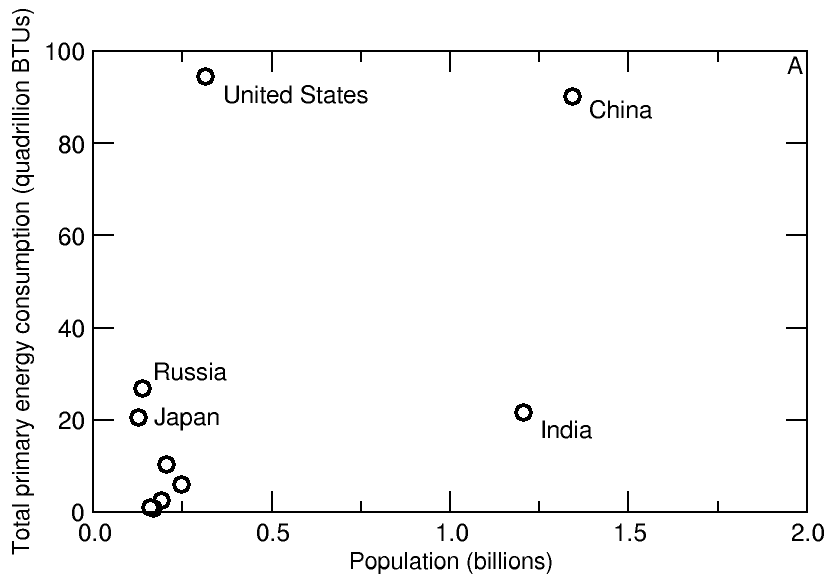 A great deal of attention is paid to the proximal causes of biosphere degradation, such as climate change, yet mitigating efforts remain largely ineffective. Unfortunately, the proximal causes are not, as argued earlier, the ultimate basis of degradation. Ultimately, the global population will continue growing, and regardless of how resources are consumed in the future, the base level of consumption must increase with population size. Yet, there are reasons to be hopeful if some effort is focused on these ultimate drivers.

It is true that little can be done at this point to lower population size, but there is much to be gained by addressing the rate of population growth and rates of resource consumption. It is unlikely that the global population, projected to reach 10 billion by 2050 [1], will be reduced significantly by any anthropogenic or natural mechanisms. Possibly the only mechanisms are deadly pandemic disease, or very high energy but low frequency physical events, such as asteroid impact. War on a scale matching the damage of such an event is almost unimaginable, the ever-present nuclear threat notwithstanding. Furthermore, predictions of severe food shortages have yet to materialize because of continuing technological innovations, socio-political developments such as better strategies for food security, and the relentless domestication of natural spaces and resources.

Growth of the global population will therefore continue into the near future, taking the biosphere ever further into the left half of our catastrophe landscape, and possibly towards a tipping point. The speed at which this happens, however, depends on the rate of population growth, and therein lies some hope. Even as the global population continues to grow, many countries are experiencing low fertility rates, e.g. those in the European Union, where the collective rate is 1.6 [2]. There are economic costs associated with a low fertility rate and aging population, but perhaps those costs can be dealt with far more effectively on the long-term than those resulting on the short-term from an irreversibly devastated biosphere. Moreover, low fertility rates are associated with positive developments in political freedom and stability, individual economic security, higher literacy rates, the extension of basic human rights and equality to women, and access to reproductive education and birth control. 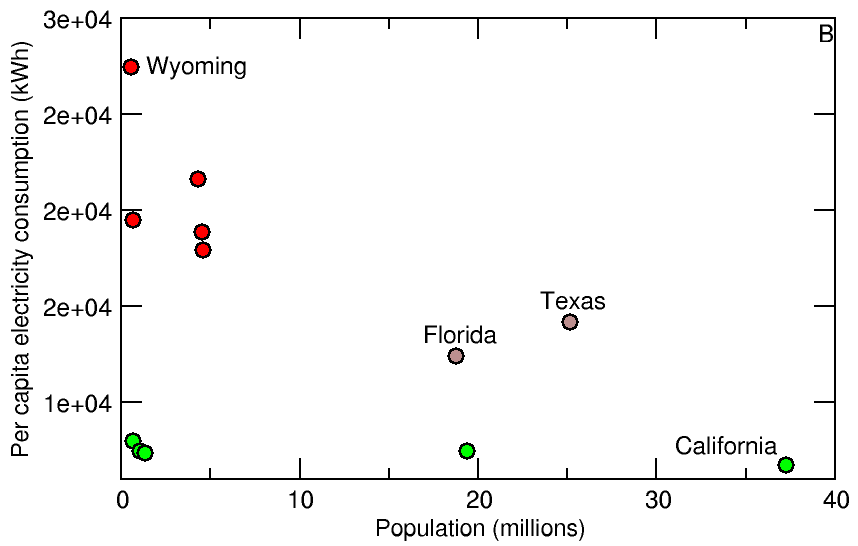 The decoupled nature of population size and resource consumption, however, means that slowing population growth will be insufficient if resource consumption continues to grow. There is hope here also though, exemplified by the large variation of consumption rates both among and within nationalities. For example, globally the United States ranks first in per capita energy consumption (i.e. how much energy each individual human uses) (Figure) [3]. Yet, among US states California, the most populous state in the union, has the lowest per capita rate of electricity consumption while Wyoming, with a population 66 times lower than California's, has the highest rate (Figure) [4]. Climatic differences account for some of this disparity, with Wyoming having amongst the coolest summer and coldest winter temperatures in the US. Climate alone cannot account for all the variance, however, because California also has two of the top 10 hottest major cities in the country, along with other populous states such as Texas and Florida. Neither of the latter states is in the top five when it comes to per capita consumption. On the other hand, other states who are in the top five group, such as Kentucky, do not have particularly extreme climates, nor large populations, and therefore have considerable room for reducing per capita energy consumption rates while maintaining high standards of living.

The global environmental crisis has little precedent in Earth's history, and none in human history. Burgeoning human population and resource consumption are the driving forces behind the crisis' many manifestations. There is a real possibility, given the complex nature of the biosphere, of a transition from the planet to which we are accustomed, to one with greatly reduced biodiversity and ecosystem services. The point at which this will occur, the rapidity with which it will proceed, and the exact nature of the new state, are difficult to predict.

The best available options are to decrease rates of fertility and consumption, with good evidence that these can be accomplished. Both rates must be reduced, for to do one without the other would take us into undesirable zones of the catastrophe landscape. That is, increasing the population while reducing per capita consumption rates will result in increasingly low and difficult standards of living, a condition already present in the world's most populous poor nations. Conversely, limiting or reducing population size in order to grow per capita resource consumption, while benefiting an elite individual, would keep a tipping point perpetually looming in the future, nevermind the thorny issue of how populations would be reduced in the first place. Both scenarios are nightmarish worlds, yet the irony is that, given a world with depauperate biodiversity and failing ecosystem services, one of those scenarios would become an eventuality. Hope stems from the fact that there are viable solutions. All that are needed is our collective will and sufficient caring for both the natural and human worlds.