Behind the scenes with Scott Moran

May 17, 2012
Earthquake
by Barbera Tannenbaum 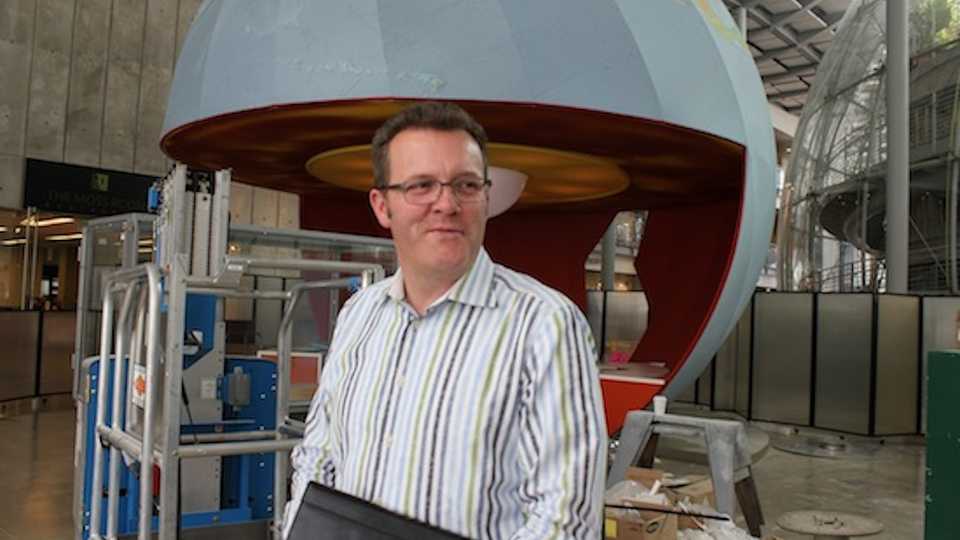 With the Earthquake exhibit less than a month from its public opening, I caught up with Scott Moran, Director of Concept & Exhibit Development, as he darted between ladders and rolling tables loaded with power tools and electrical wires on the ground floor of the Academy's West Pavilion. Moran was on his way to test the audio portion of the new Shake House exhibit, set inside a replica of a San Francisco Victorian-era dining room.

"Every exhibit tells a story," he says, comparing this phase of preparation to a dress rehearsal.

To tell the story of Earthquake, Moran and his team are using an 8,000-square-foot area and six different installations (including a mini-dome theatre, a live animal enclosure, fossils and a 25-foot wide model of Earth that you can walk through) to describe the movement of Earth's tectonic plates across two very different time spans—the vast stretch of geologic time and the more immediate lens of human time. (Launching at the same time will be a new planetarium show that examines the seismic forces that shape the Earth. Stay tuned for a behind-the-scenes look at the artists and visualizers who are putting the finishing touches on this show.)

View a video of the Shake House here.

"Geologically, earthquakes are a natural process of our dynamic planet," Moran explains. Plate tectonics has impacted evolution, the dispersion of species, and the creation of continents over hundreds of millions of years. "But on a personal level," he says, "we experience this process as a series of jolts. We call these jolts earthquakes."

Maybe that's why the Shake House is so popular. This version is the third such exhibit to open in the Academy. Two previous versions were developed in the 1980s and 90s by Dr. Bruce Bolt. Bolt was a UC Berkeley professor and former president of the Academy's Board of Trustees.

"This time, we didn't just want people to go into a dark room and get a good shake, no matter how fun that is. We asked ourselves, 'what happens when you're in a quake?' You're usually at home. The first thing you do is look around and try to figure out what's happening."

That's why the new Shake House is an immersive experience set in a living room. The walls are painted stark white. But everything that rattles around during a quake—paintings, dishes, glassware, books and a chandelier—are vibrantly colored. The view through the bay window is of San Francisco's famous "Painted Ladies of Alamo Square," a row of Victorian houses framing the city's downtown skyline.

The experience will take visitors through the tremors of the 1989 Loma Prieta quake. Then the lights will flicker and dim. The view out the window will slowly change from the modern city to the skyline circa 1906. A simulation of the historic 7.9 tremors will begin.

A Santa Cruz native, Moran has lived through several California earthquakes, including the 6.7 Northridge quake in 1994. "I wasn't in San Francisco for the '89 Loma Prieta quake, but I felt it," he says proudly. Attending Cal Poly in San Luis Obispo, Moran remembers that the powerful tremors woke him during an after-class nap.

All this shaking is having a subtle impact on the Academy staff working around the clock to complete the exhibit before May 26. "People are telling me they're making the time to put together earthquake preparedness kits," Moran says.

"Last weekend," he adds with a grin, "I even found myself buying three additional flashlights."