Mystery in the Stacks, Part II

Last month I wrote about Leverett Mills Loomis, the two Guadalupe Storm Petrels, and the other items he rescued from the fire that destroyed the California Academy of Sciences in the wake of the 1906 earthquake. I discussed our fine copy of Marc Athanse Parfait Oeillet Des Murs’ Iconographie Ornithologique, which I have referenced multiple times over the years without realizing that Loomis had saved it. If you'd like to view a complete copy of this beautiful work online, visit the Biodiversity Heritage Library to see the Smithsonian's copy. I promised to return and discuss the part of Loomis' letter of May 7, 1906 reading:

As I wanted to be the first donor to the Academy’s new ornithological library, I put Brown’s illustrations under my arm as I passed the store-room.

This read to me as if Loomis was in possession of some of Captain Thomas Brown's hand colored engravings, originally issued in 1835 as Illustrations of the American Ornithology of Alexander Wilson and Charles Lucian Bonaparte, Prince of Musignano... The work was intended to serve as the illustrated atlas accompanying the original European edition of Alexander Wilson's groundbreaking American Ornithology, first issued in Philadelphia between 1808 and 1814. I found this shocking to say the least. I had never seen a copy of Brown's Illustrations in the Library, and I only 12 copies are listed in OCLC WorldCat. It is a beautiful work, considered one of the rarest illustrated ornithologies, issued in Royal Folio (20 inches tall) with vividly colored plates. 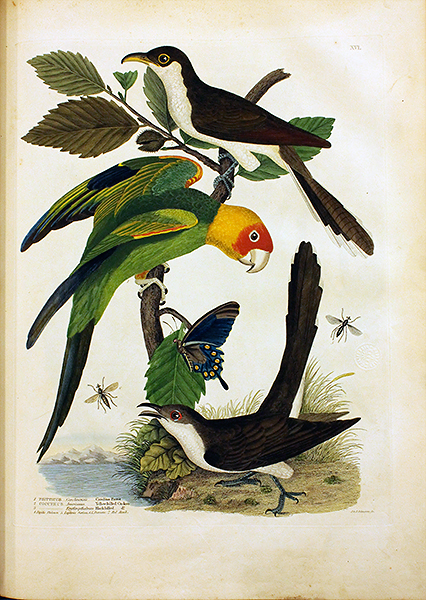 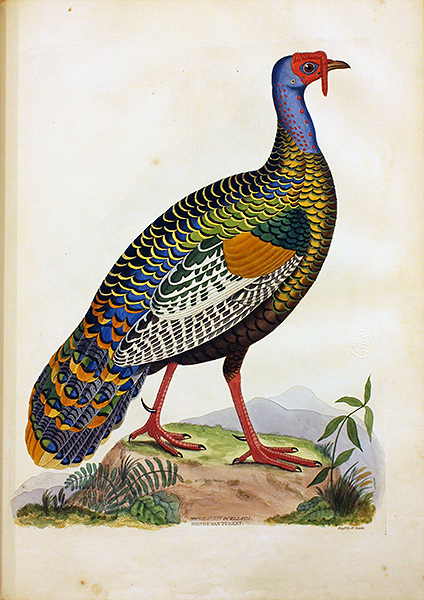 (Above, from left: Plate 16 "Carolina Parrot," Yellow-billed Cuckoo," and "Black-billed Cuckoo." Below: Unnumbered plate "Honduras Turkey." Both from Illustrations of the American Ornithology of Alexander Wilson and Charles Lucian Bonaparte.)

None of the records I examined gave any clue as to what Loomis had done with "Brown's Illustrations." Remembering that the Rare Book collections were once upon a time cataloged differently than (and housed separately from) the rest of the Library, I decided to scan the shelves to see if anything seemed to fit the bill. Scanning the oversize shelves in the range of QL674 - QL682 (the classification of the other Wilson volumes), I figured I might find a manila folder with a few loose plates, or something similar. Imagine my surprise at finding what appeared to be a large, complete folio volume, with a call number on a tag (made on a typewriter) but with no barcode or other label. A bookplate on the pastedown reads "Presented by Leverett Mills Loomis April 18, 1906." It seems unlikely that Loomis would make a gift to the Library while the City was engulfed in flames, so I'm going to wager that this bookplate was created long after the book was rescued. When I opened the volume, I discovered an inscription (in Latin) apparently written by Behr, gifting this book to Loomis in July of 1900 or 1901. 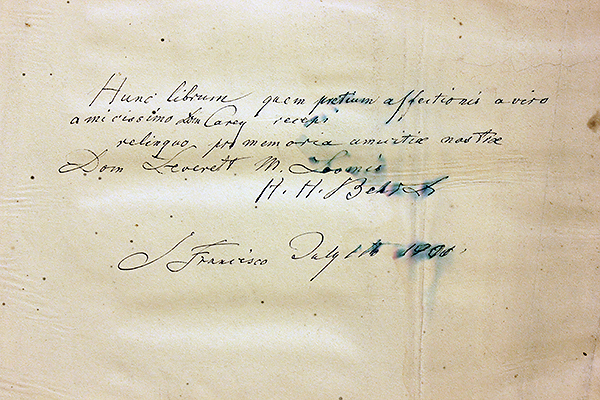 (Inscription from H.H. Behr to Leverett Mills Loomis, from Illustrations of the American Ornithology of Alexander Wilson and Charles Lucian Bonaparte.) The first plate in the book also boasts the inscription "Property of H. H. Behr" faintly in the upper right.