A Mouse? A Bird? It's a Mousebird!

Recently, I’ve been preparing some very cool specimens from South Africa. South Africa has a unique array of habitats and an incredible amount of biodiversity, which means that it is home to a wide variety of animal and plant species. There are 858 bird species found there! Here, you can see six different species that I pinned to dry. 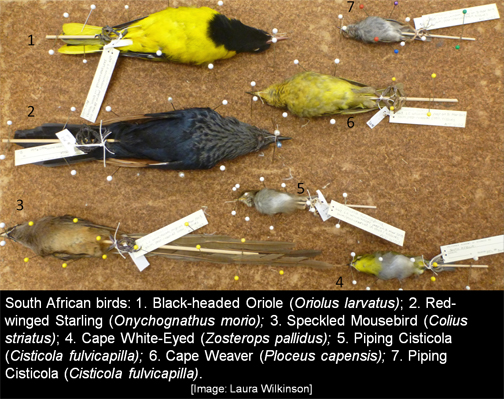 Although all of the different species are equally interesting, one of my favorites is a unique bird called a mousebird. There’s not a lot of recent research published about these birds, so they are an invaluable part of our collection. Historically, mousebirds were found in Europe, but presently are only found in Africa. They are the only species in the family Coliidae as well as the order Coliiformes, and there are only six species total. So, why are they called mousebirds? 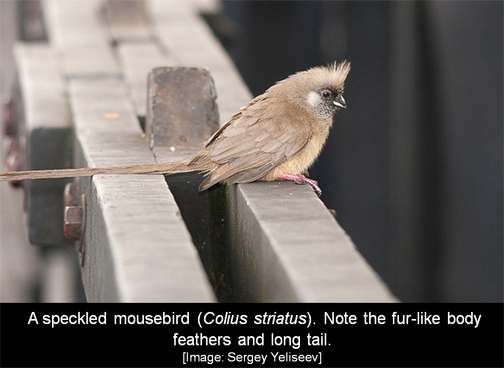 As you can see, they have very long tails and their body feathers are short and fur-like. An even more interesting feature is the fact that they can rotate their first and fourth digits on their feet to effectively grasp on to a variety of surfaces. This allows mousebirds to scurry along the branches of trees, much like a mouse might. Combined with its physical appearance, it’s clear how this bird got its name.

In our research collection, we have specimens of four of the six species of mousebirds, three of which are found in South Africa. The Blue-naped Mousebird, third bird from the left, is found in Eastern Africa. Having these study skins gives researchers the opportunity to learn more about these fascinating birds. 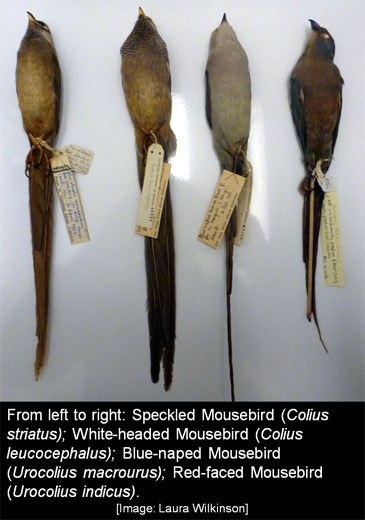 It’s always a nice change to be able to prepare study skins of birds that aren’t from California. If you ever are lucky enough to travel to Africa, hopefully you’ll catch a glimpse of a mousebird before it scurries away!