Attack of the jellyfish- a sign of imbalance in the ocean

The subject of surging jellyfish populations in the ocean came up in discussion this week at a social gathering at the Academy.  I admire the beauty and elegance of jellyfish, but their numbers are disrupting the balance of marine ecological systems. Rising sea temperatures, overfishing, decreases in shark and sea turtle populations, increases in low oxygen levels, and run- off from agricultural fertilizers are just some of the factors, which may be leading to their proliferation. Little historical data documenting their populations has made it difficult to be absolutely certain there are more, which is also leading to greater challenges to devise solutions to tackle the problem. Scientists from the University of British Columbia do have evidence showing 2,000 species of jellyfish have been appearing early than normal each year. 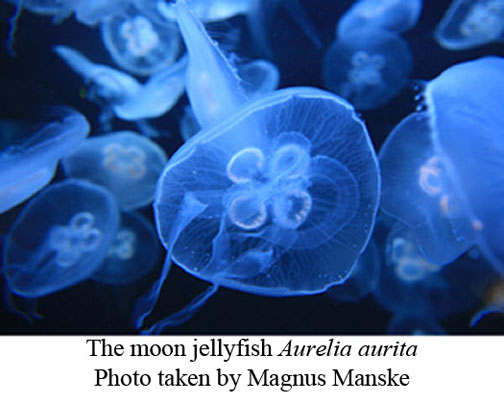 Their large numbers are becoming a nuisance since they are clogging pipes, which bring in water to nuclear power and desalinization plants. If cool water does not make it to the turbines of nuclear plants in a timely fashion it can lead to a devastating fall out, like that of Japan’s Fukushima Daiichi plant.

Increases in jellyfish may also be exacerbating ocean acidification (increases in the amount of carbon dioxide in the ocean lowers the pH, making it more acidic), since marine bacteria are less able to take in carbon from decaying jellyfish than they are from fish and other marine organisms. Rather than using this carbon to grow, the bacteria are breathing it out as carbon dioxide. Jellyfish are also disrupting marine food webs, since they are consuming larger amounts of plankton, depriving smaller fish of their food. Since fewer organisms feed on jellyfish, nutrients are also not being adequately transferred up the food chain.

The box jellyfish, the most toxic jellyfish in the world responsible for over 5,000 deaths since 1954, has turned up in some unlikely places due to increases in ocean temperatures and changes in currents. Some have migrated as far north as North Carolina from the Caribbean. These occurrences have raised concerns about safety along beaches up and down the Eastern coast of the US.

So, you might be thinking, but what can I do about it?   Just a few of the ways you can help with the jellyfish infestation in our ocean include: supporting sustainable fisheries including those that prevent excess by-catch of jellyfish predators, such as sea turtles, and purchasing organic foods, which do not contribute to excess fertilizer input into the ocean.

Stay tuned for my next post on the Fukushima Daiichi plant nuclear fall out and its impact on the ocean.