Birds and Music: What’s in a song?

You may think your last Karaoke session sounded great, but we’ve got nothing compared to the natural ability birds have to sing from early on in life. Birds use sound to attract a mate, defend their territory, sound a danger alarm to nearby birds and communicate with their mate, young and flock members. Although most birds will sing one song for their entire life, some species of birds such as parrots, starlings and some songbirds can incorporate new sounds into the repertoire over time.  This week in the Project Lab I prepared a Zebra Finch, a species that has been studied for their vocalizations. 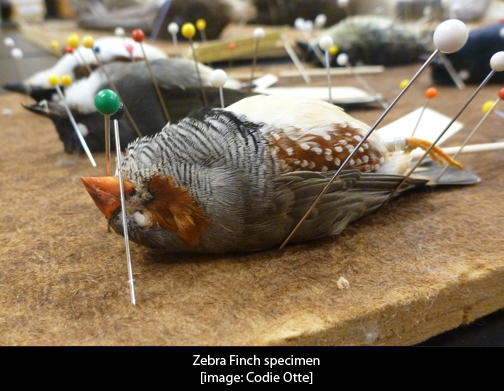 Young male Zebra Finch (Taeniopygia guttata) learn their song from a father or mentor.   Without this guidance, the Zebra Finch can have a song that sounds very different from the typical melody heard in most Zebra Finches.  The brains of the young males need to process their mentor’s song at a specific age to make the connection between their own sounds and the song they will need to learn to attract a mate.  The resulting song is the song of their mentor plus a few notes acquired from random environmental noises.  Many researchers use these Finches and the neurological pathways that are used to learn their specific song to study acquisition of speech in humans.  Although these little birds can be studied for their human applications, bird song can also be used in systematics.

In some bird songs there are distinct differences in vocalizations between populations.  Researching these differences in bird songs can help identify and discover subspecies or genetic lineages.  Many researchers use the Ornithology and Mammalogy research collection to collect genetic and morphological data for their studies. Using this in conjunction with audio recordings, researchers are able to better address their research goals.