The other week I prepared a California Quail (Callipepla californica) for the O&M research collection and it got me thinking about our beautiful California State bird. Found throughout the West Coast from Baja California to the Pacific Northwest, the California Quail was named state bird in 1931.  Round, charming and distinct these quail are delightful to watch foraging under shrubbery, plumes bobbing with every scratch. 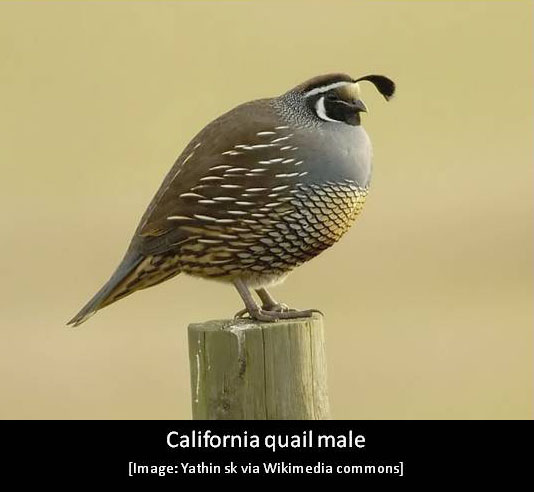 Some may wonder, if these birds are so common in the rest of their range, why is local extirpation a problem?  One issue is the urban landscape- a changing landscape in the city is difficult for these birds that mostly travel by foot.  Crossing roads and traversing city streets even just within the park can be dangerous and fatal.

Another factor is increased predator populations that prey on the quail’s young and eggs.  Well-meaning park visitors regularly feed raccoons, rats and feral cats, but this extra food brings in more predators and allows the park to artificially support larger predator numbers that then turn to other local wildlife as a additional food sources.

Finally, when a specific population of any species disappears, it also takes its genetic information with it.  Loss of genetic variability overtime can cause a species to become vulnerable to changes in its environment.  If one population is susceptible to the same stressor (disease, bacteria, viruses, etc.), there is less chance that population can survive an outbreak without large losses.  Due to its small population, San Francisco’s quail residents are struggling with low genetic variability and inbreeding, which produces less fit young.  This puts them at further risk. 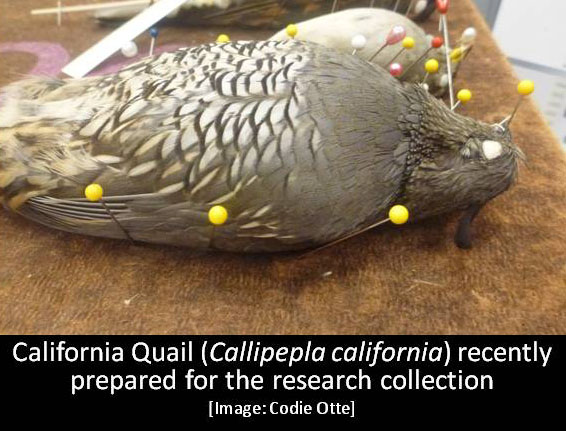 So how do the Academy’s research specimens fit into this story?The research collection’s specimen database is a helpful resource in tracking the historical distribution of California Quail within San Francisco.  Combining this information with current avian surveys provides useful information for restoration plans to provide habitat for quail.  Hopefully San Francisco won’t lose its last quail residents just yet!