If you live in California, you are pretty much surrounded by weeds! Wait, weeds? What determines what is considered a weed and what isn't? A weed is a plant growing in a location where it is not desired, so one (wo)man’s weed is another’s bounty.

Weeds grow on lawns, street dividers, athletic fields and golf courses, vacant lots, rooftops, sidewalk cracks, and farms.   Humans have developed technologies that can be very effective in removing or eliminating weeds, but these technologies are often used before considering what the overall consequences might be. Weed control has become a big business for both the petrochemical companies that produce herbicides and the bioengineering firms like Monsanto. Case in point: Monsanto produces glyphosate herbicides (commonly known as Roundup), which kill grasses and broadleaf annual weeds. Alongside this herbicide, they also bioengineer corn and soybean varieties known as ‘Roundup ready’. The combination of these products allow farmers to plant their crops, then spray the fields with glyphosate, killing all the weeds and leaving the corn or soybeans unharmed. This works out well for the chemical and seed companies who make a profit from the farmers who use them. The farmers benefit by not having to weed their crops, but who loses besides the weeds?

This year’s count of Monarch butterflies is the lowest ever, so low that many experts are concerned about the survival of this iconic species. One probable cause is the use of Roundup ready crops. Millions and millions of acres of corn and soybeans are now completely weed free, almost completely eliminating the food source for the butterfly, and probably many other insects as well. Monarchs rely on a single food source: milkweed. Without access to this food source as they migrate great distances every year, the Monarch population is in steep decline.

I didn’t have any access to milkweed this week, so I decided to take some close-up images of a common lawn weed, a member of the Geranium family known as storksbill. This common plant was probably introduced from Turkey and is found in many urban and suburban lawns, where it is considered by some to be a weed.   I used the Big Kahuna imaging system to take a series of photos, each one a closer view of this pretty little weed. These three images are the result. 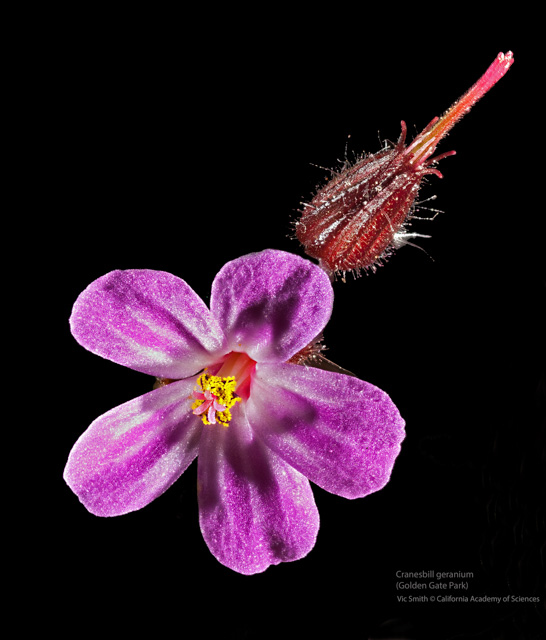 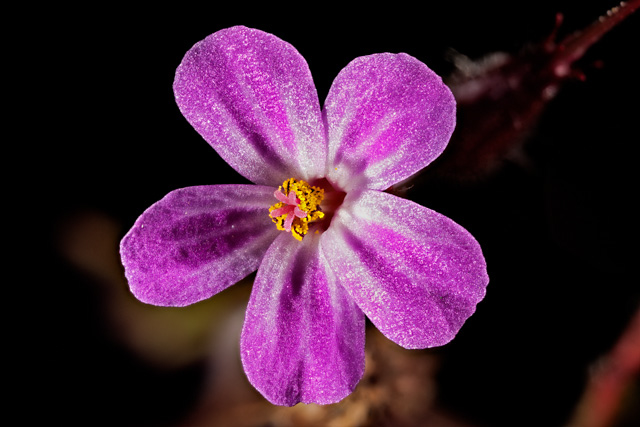