Tales from an Expedition

So I’ve been back from the field for about a month now, but there is still so much to tell about my experience as a part of the 'Our Planet Reviewed’ Initiative, Papua New Guinea 2012-2103 Expedition. 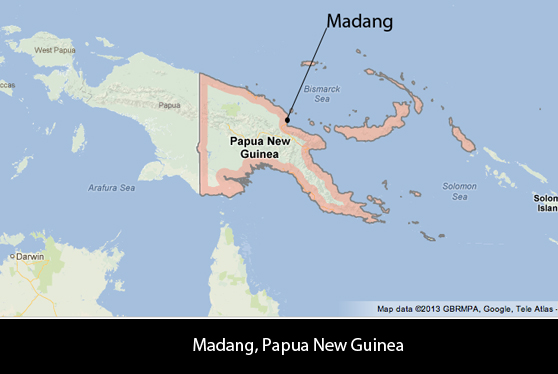 The goal of the expedition was to document as many species as possible from the Madang Lagoon, to get a sense of the level of biodiversity of this part of the Coral Triangle.  Through this kind of fieldwork, not only do we discover new species, but we also collect baseline data to see how diversity can change in a region over time.   I was part of a team that was looking specifically for nudibranchs and other sea slugs.  For four out of six weeks, our opisthobranch (sea slug) team consisted of two graduate students: myself and Jessica Goodheart from Cal Poly Pomona. My advisor Terry Gosliner joined for the last two weeks of the expedition. Though it was only a few of us as the main sea slug collectors, other divers also brought us specimens and were huge help. 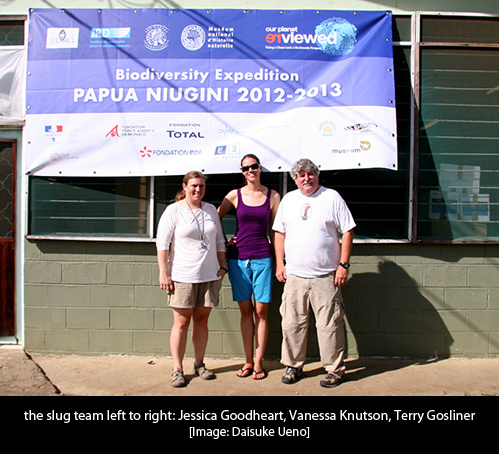 Of the three legs of the expedition (terrestrial, shallow water, and deep water), the shallow water marine part (the part we participated in) had about 120 different participants from at least 18 different countries!  About 90 of these were scientists and the rest included photographers, people involved with SCUBA logistics, a scientific illustrator and even a sociologist. The whole expedition involved a HUGE amount of coordination!

As you can imagine, an expedition of this size needs a laboratory so that all of the scientists can observe and process their specimens. This temporary lab space must be able to accommodate many scientists coming and going over 6 weeks. We would spend anywhere from about 6 to 10 hours daily in the lab (others spent longer hours in the lab, but we spent several hours diving everyday in addition to lab time). Here is what our temporary lab space looked like: 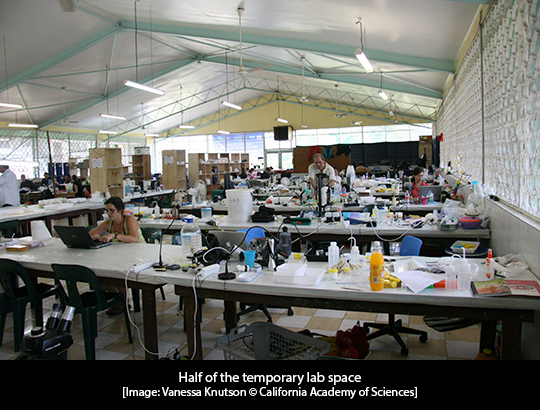 There were lots of stations with the essentials: power outlets and desk lamps, and for many stations, microscopes. Our setup for sea slug collecting was pretty basic. Here is a peak at what our workstation looked like with some notes on the tools of the trade: 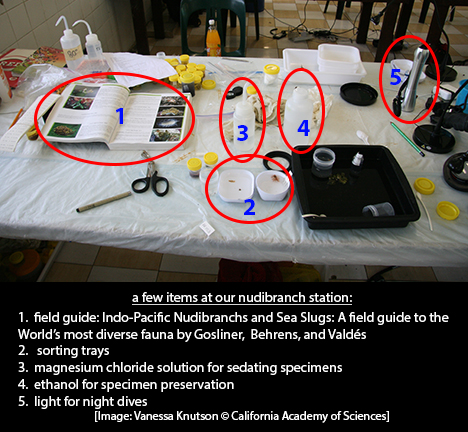 So what was it like to be in this temporary lab space?  HOT!!! The weather in Madang was roughly in the high 80s with high humidity.  It was also apparent that the heat would prefer to hang out in the lab with all the scientists rather than disperse elsewhere.  Imagine trying to take a photo of a slug that is the size of a grain of rice while you have sweat dripping down your face!  Good thing we had a fan, even if it did break during the last week.

That's all for now.  Stay tuned for more about how we actually collect these slugs and preserve them...