Scientists agree that the beetles (Order Coleoptera) contain the highest number of species of any animal on earth, with 400,000 described species and an estimated 1 million described and un-described species together. However, even their great numbers do not protect them all from threats of extinction. Environmental scientists have realized that the greatest threats to most species are the destruction of habitats caused by expanding human activities, and the introduction of invasive species, also linked to globalization and human activities.

This blog will examine the effects of habitat destruction and invasive species on a California native beetle, Elaphus viridis, the Delta Green Ground Beetle. This small green beetle is now only known from parts of Solano County, but it is thought to have once inhabited much of California’s central valley. It has been federally listed as Threatened since 1980. The main reason for its decline appears to be the destruction of its habitat, vernal pools. Vernal pools are perhaps one of the most delicate and threatened habitats in the central valley. Found in poorly drained low lying areas, vernal pools fill seasonally from winter rains, and by summer are dry. Their presence and quality have been diminished and degraded by tilling for agriculture, draining by landowners to grow crops, and poor management of grazing animals. In addition, remaining vernal pools are often infested with an introduced plant, the Garden Lipia, (Phyla spp.), which forms a dense mat, crowding out native species and making foraging for the beetle very difficult. The beetle’s life cycle is intimately synchronized with the wet-dry cycle of the pools. The beetle emerges in January, mates in February and March, and goes dormant by May when the pools dry up. Like all ground beetles (Carabidae), it is an active predator, feeding on soft-bodied arthropods. Vernal Pools are classified as wetlands, and are officially protected by the federal government. While some vernal pools are on protected lands, like the Jepson Preserve, many are on private property and are difficult to find, protect or conserve. 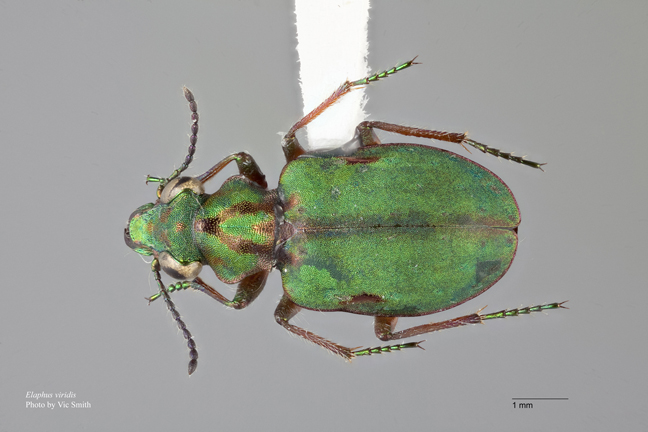