A Visit to the Polar Research Institute of China

When I traveled with my family to China and Mongolia this summer, I didn't expect the trip to figure into this blog. Antarctic-related encounters seemed unlikely, outside of conjuring cold thoughts to battle the unrelenting heat. But on arriving at Mongolia's vast western steppes, the region's grandeur triggered a profound sense of Antarctic déjà vu. The lack of ice and snow hardly mattered; there were endless landscapes, diverse ecosystems, undisturbed environments, a sparse human population, protected area designations, and science teams in the field. It was inspiring, and when it came time to leave for China, I resolved to find an Antarctic encounter of sorts there too. Fortuitously, our itinerary included Shanghai, home to the Polar Research Institute of China. The thought of visiting China's main polar research center was alluring. So was the notion of gaining admission to an actual Communist government agency in the PRC. It felt rather subversive, and a bit off-limits. Wouldn't they suspect us as spies? Surely we'd be turned away. So when my wife Lili, who speaks Mandarin, successfully arranged an appointment with the Institute, we were euphoric despite the fact that we had no idea of what there was to see there. 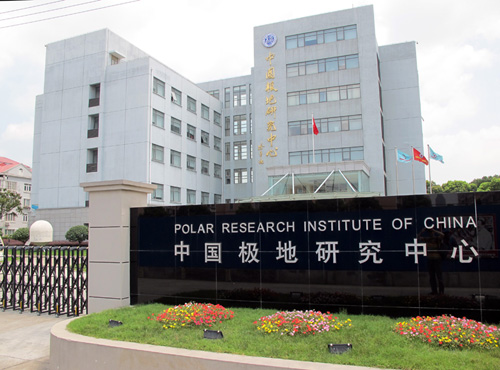 The Institute is a hulking edifice in Shanghai's Pudong district. We passed through the complex's security gate and into the lobby; no IDs checked. A staffer with a fittingly icy demeanor led us to an exhibition room devoid of visitors, waved us in, and said she'd be back in an hour. Photography was OK. Spies were clearly not a concern. 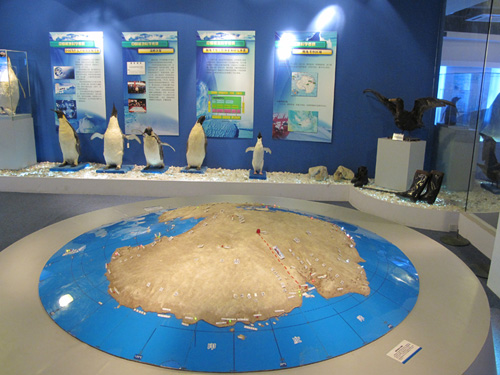 The exhibition showcases all manners of Chinese polar research and achievements. There are dioramas, maps, models, charts, and a plethora of informational signage, all in Chinese. I was grateful to have read up on China's polar programs beforehand, and Lili was grateful to be spared from having to translate all the text. The gallery's centerpiece is a large relief map showing China's three polar research stations in Antarctica: Great Wall Station on King George Island off the Antarctic Peninsula, Zhongshan Station on the eastern Antarctic coast, and Kunlun Station situated 13,000 feet (4,000 meters) above sea level at Dome Argus, the highest point of the expansive East Antarctic ice sheet. 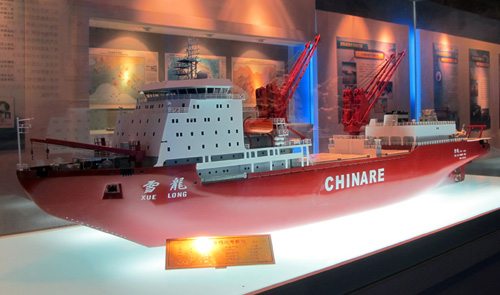 China is a relative newcomer to the Antarctic research community. Its polar scientific program only began in 1981 and the Polar Research Institute was founded in 1989. Today China commands a noteworthy presence on the Ice and participates in several international projects at any given time. A significant one is the U.S.-led Antarctic Gamburstev Province (AGAP) project, which last year verified the existence of a rugged mountain range buried more than four kilometers (2.5 miles) under the giant East Antarctic Ice Sheet. 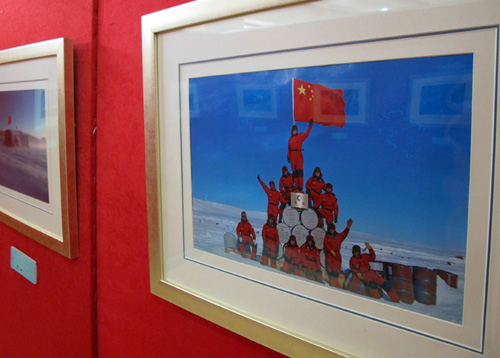 China itself led an international team of scientists in 2008 in setting up a robotic observatory, PLATO (PLATeau Observatory) at Dome A that runs a variety of experiments. Each of the last two winters, the instrumentation operated without a human within 600 miles for more than 200 days. Deemed a successful prototype for future robotic observatories, the team is building two new PLATOs this year. One will be deployed to the Japanese Antarctic station of Dome Fuji and the other is a higher-end addition to Dome A that supports a new suite of instruments. The National Science Foundation, which manages the U.S. Antarctic Program, supports the program by providing Iridium satellite communications as well as funding several first-light site-testing instruments. These current endeavors, however, are absent from this exhibition whose static displays limit it to broad overviews of polar research and past accomplishments. Introducing new media would really bring the content to life and up to date. I imagine a wall monitor featuring live broadcasts and breaking news from Ant- arctica for example. Real-time updates would convey the excitement, pace, and immediacy of science on the Ice and enhance the visitor experience immensely. 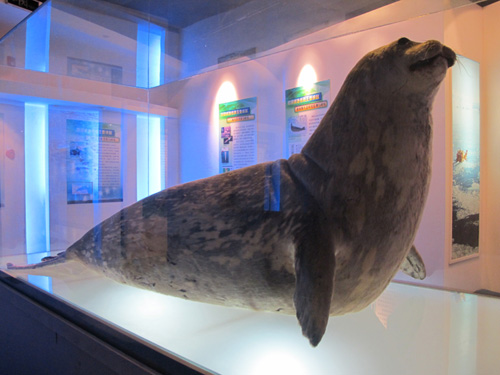 After an hour, the icy staffer re-appeared, ushered us back to the lobby, and showed us the door. I'll admit I was hoping for a little something more from the visit; perhaps a tour or a glimpse of a scientist. But I can't complain; we'd found our Antarctic encounter, inside a Communist government building no less. 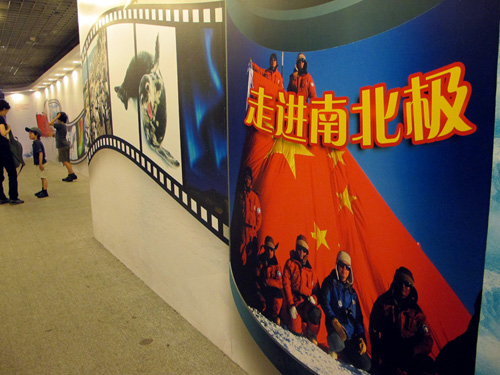 Besides, there's more: Back in central Shanghai on the Pudong end of the Bund Sightseeing Tunnel, we came across yet another Antarctic exhibition: the "Polar Experience Museum" which isn't so much a museum as an exhibition space with distinct similarities to the Institute's. This attraction, presumably a satellite of the Institute, is pictured in these last three photos. 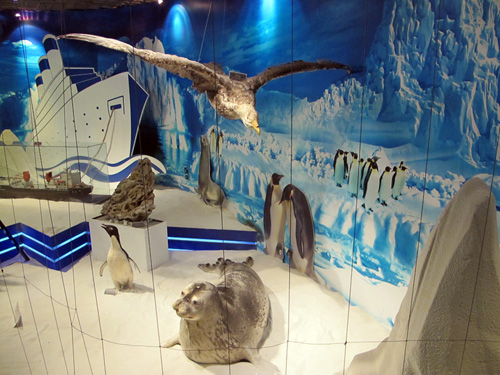 For those needing to scratch an Antarctic itch in Shanghai, the Polar Experience Museum will probably suffice. It's more centrally located than the Institute exhibit, better lit, and populated by visitors. 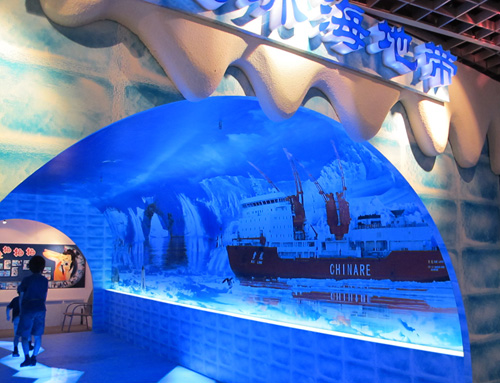