The Long View Project's first print edition, previewed in progress some posts ago, is now complete. It's titled "21-Step Grey Water Treatment System," issued as four pochoir stencil prints, each on a different color of paper. As I mentioned back in the Dry Valleys, grey water is a term for waste water resulting from washing, cooking, and similar activities. Grey water contains cooking fats, oils, and soap and detergent residues which Antarctic stations manage along with human waste ('black water') in accordance with the Protocol on Environmental Protection to the Antarctic Treaty (a.k.a. the Madrid Protocol) in efforts to minimize human impact on the environment. Releasing untreated waste water containing microorganisms into active ecosystems is particularly concerning since some pathogens can remain viable in low-temperature Antarctic conditions for extended periods, providing them the potential to occupy local habitats and infect native bird, mammal, and marine populations. You'll find representations of this bacteria lurking in my artwork below. While all of Antarctica's 82 research stations (operated by 28 nations) presumably meet the Protocol's minimum requirements for waste water management, their methods vary widely. Stations' capabilities depend on their size, accessibility, longevity, and local weather and geography among other factors. Large coastal stations such as McMurdo are likely to have established plants using mechanical, biological, and disinfection processes, while most U.S. field camps' sewage is removed from the continent altogether, while inland bases such as the U.S.'s Amundsen-Scott and Russia's Vostok dispose of untreated human waste in deep ice pits. This artwork imagines a future with advanced waste water treatment technology in place at all Antarctic research stations. The imagery is inspired by plant schematics and a 2005 Swedish survey of 71 stations to identify optimum grey water cleaning techniques in the context of Antarctica's challenging conditions. 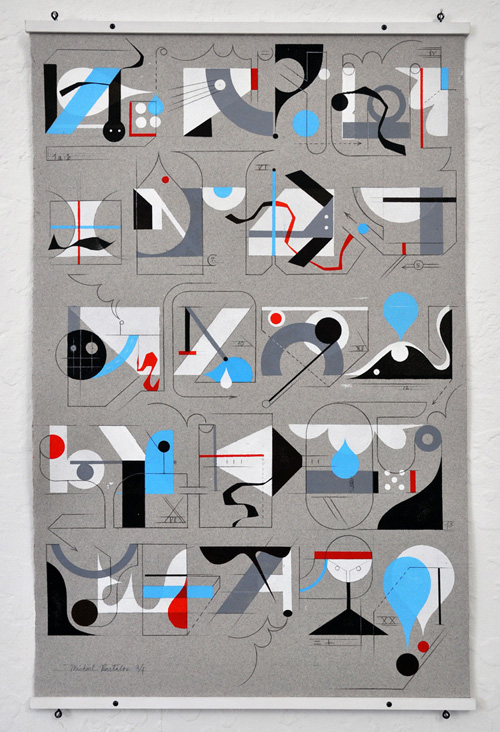 The "21-Step Grey Water Treatment System" edition was made by a hand-printed process called pochoir which employs stencils in creating imagery. I used gesso and matte acrylic as the medium, and Japanese 'surikome bake' rubbing brushes to apply the paint. Each of the four prints measure roughly 24″ x 18″ and are embellished with graphite line work. Print #3, shown here, is currently on exhibit along with "The AA Five" in REFRAME: Making Sense of Waste at ARC Gallery, San Francisco through May 30. From curator Hanna Regev's press release: "'Reframe' is a teachable moment and reflexive show that calls for individual responsibility, an examination of the waste around us, and questioning our consumption behaviors. While viewing the exhibit, we ask that you think of ways to harness the insatiable appetite for goods that drive the demand of ever-increasing products. As consumers and viewers, think of what you contribute to environmental degradation and your consumption habits." Featured artists are Michael Bartalos, David Broom, Alejandra Chaverri, Gregangelo Herrera, Wolfgang Ganter, Rebecca Goldfarb, James Goode, Beth Grossman, Avi Hoen, Judith Selby Lang, Richard Lang, Jose Ramon Lerma, Liz Mamorsky, and Noah Wilson. Music will be performed by James Goode on instruments created from recycled materials.