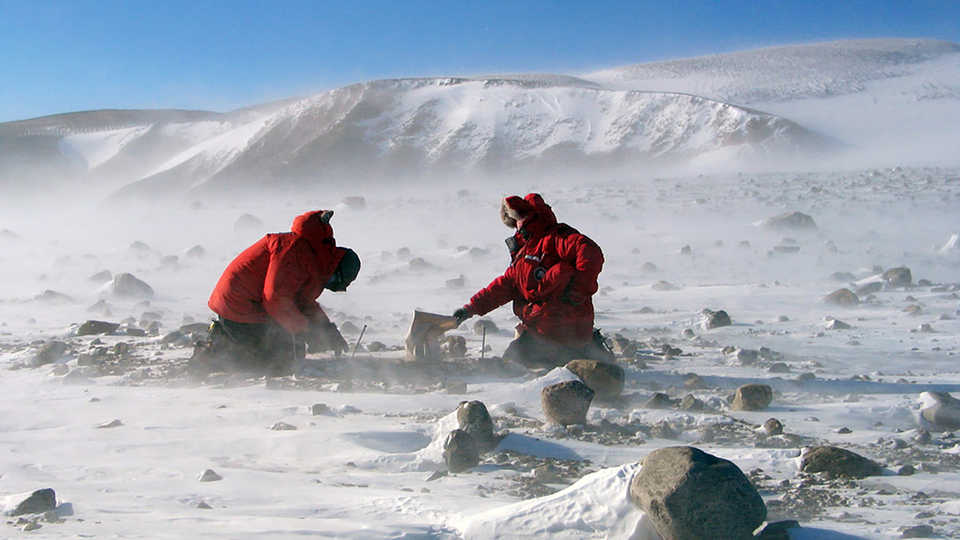 Ice cores are samples of accumulated snowfall that are obtained by drilling into beds of ice and extracting frozen substrata. These long, layered, cylindrically-shaped extracts contain concentrations of dust, pollen, microbes, and gas bubbles that reveal climactic and atmospheric conditions at various points in time. As I wrote in a coring post two years ago, tapping glaciers and ice sheets that still accumulate snow have yielded samples up to 800,000 years old.

Recently however, researchers led by Jaakko Putkonen of the University of North Dakota have recovered two 10-meter ice cores that are believed to be more than twice as old. These samples, the oldest ever discovered, come from Antarctica's Ong Valley whose glacier lays buried under a protective layer of dirt and rocks, preventing ice from evaporating, or sublimating, in the sun. Having determined that the accumulated surface debris itself had been exposed for more than a million years, Putkonen and his team reasoned that the ice below must be older still.

These cores of unprecedented age will provide them with a deeper view into prehistoric conditions in Antarctica. Subsampling ancient microbes and pollen grains in the ice for DNA samples, for example, will shed light on material that hadn’t seen the surface of Earth for over a million years. The main objective of the study however is to gain insights into how this ice survived for so long. As the project abstract states: "The intellectual merit of this research is to unequivocally determine the age of the ice and the sublimation rate of the ice in Ong Valley, Antarctica and to better understand if this an uniquely Antarctic process or whether it could exist elsewhere on earth or on other planets."