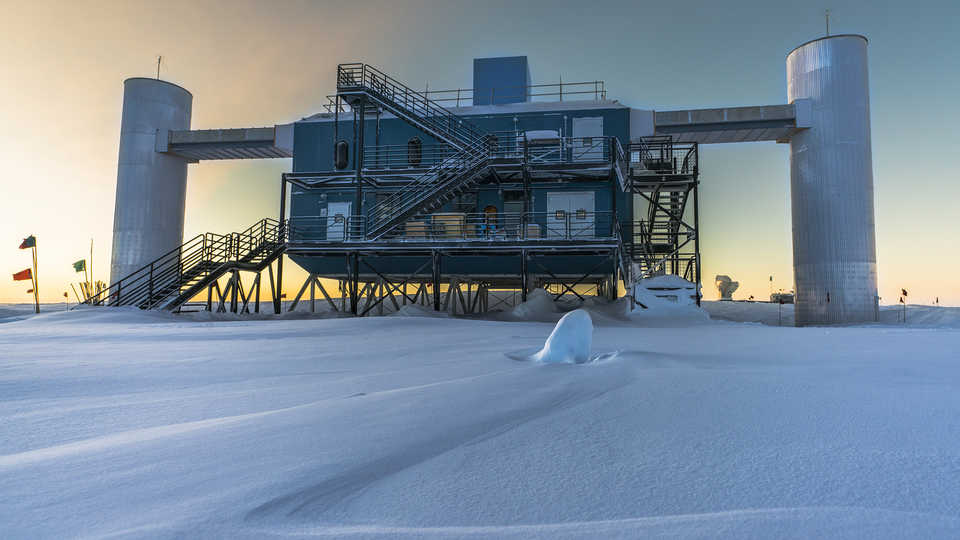 The IceCube Neutrino Observatory at sunset, 2017. The lab searches for neutrinos using thousands of sensors distributed over a cubic kilometer under the South Pole ice. Credit: Martin Wolf, IceCube/NSF

Happy Halloween! Here's a spooky fact: neutrinos are often called "ghost particles." And for good reason. These nearly massless subatomic particles travel in straight paths through the cosmos, passing through galaxies, stars, planets, and Earth — unhindered and unnoticed. In fact, trillions of these ghosts move through us all the time at close to light speed without our sensing them.

Most Earth-bound neutrinos come from the sun but a small percentage with extraordinarily high energies originate in deep space, having traveled billions of light-years. Their cosmic origins remained elusive until the IceCube Neutrino Observatory at the South Pole detected a neutrino last year from outside our galaxy for the first time. The observatory's sensors, encased deep in Antarctic ice, did this by recording a rare collision between a neutrino and an atom which allowed scientists to calculate the approximate path of the incoming particle.

Its trajectory was further refined with the help of ground and space telescopes the world over, using several types of signals to interrogate the cosmos. This burgeoning field, known as multimessenger astrophysics, is delivering unprecedented discoveries. In this instance, the combined observations identified the neutrino's source as a blazar called TXS 0506+056 some 3.7 million light years away.

Blazars are active galaxies with supermassive black holes at the center that send streams of ultra-energetic particles and radiation in Earth's direction. These particles are believed to include cosmic rays which hit our planet like neutrinos do. Unlike neutrinos however, cosmic rays are charged, causing them to be deflected by magnetic fields that permeate the universe, making their origins almost impossible to trace.

As a result, researchers are counting on neutrino detection to help answer questions such as: How do blazars manage to accelerate neutrinos and cosmic rays to such tremendous speeds? Why does TXS 0506+056 spew neutrinos in ways that other blazars throughout the cosmos do not? Are blazars the only celestial objects that produce such highly energetic neutrinos? What can neutrinos revel about dark matter?

Until now, we've relied on light to explore astronomical mysteries. But neutrinos are opening up new ways of understanding the universe that would be impossible with light alone. Ghosts, it turns out, are not only real, but have a lot to teach us.