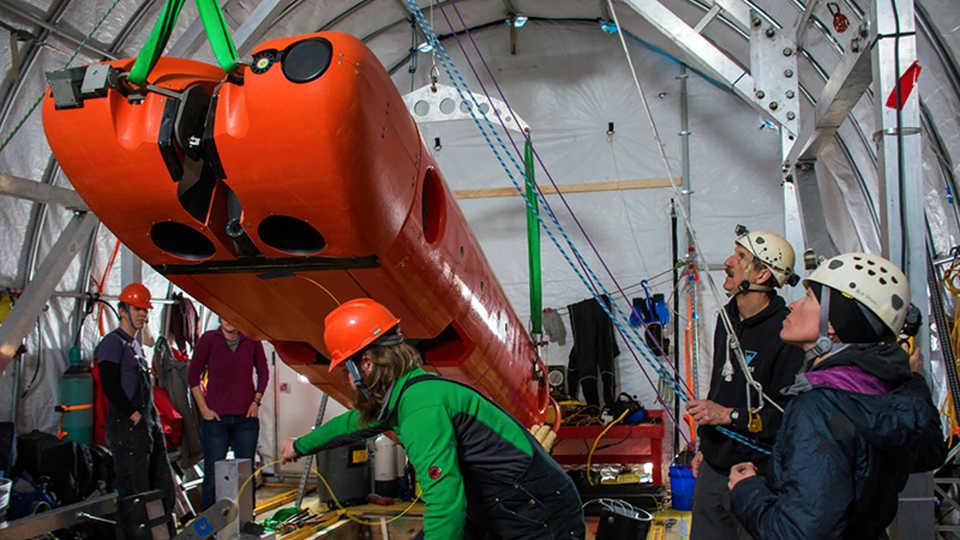 The SIMPLE team prepares the autonomous underwater vehicle ARTEMIS for a launch.

Underwater robots have been exploring beneath the frozen surface of Antarctica's oceans for several years to monitor sea ice thickness and gather data on the continent's ecosystems. This research is key to understanding the Earth’s climate and ocean systems and our impact upon it.

But Antarctica is also serving as a testing ground to understand worlds beyond our own planet. Scientists are deploying robotic technology under the ice in hopes of one day sending similar probes to explore liquid oceans under the frozen surfaces of planetary bodies within our solar system.

One such project is called SIMPLE which stands for Sub-ice Investigation of Marine and PLanetary analog Ecosystems. By studying how Earth's ice and oceans interact to support life, SIMPLE aims to better understand ice-ocean systems on other planetary bodies (namely Jupiter’s moon Europa) while simultaneously developing technology to be deployed on such astrobiological targets in the future.

Funded by NASA, SIMPLE consists of several vehicles including the Submersible Capable of under-Ice Navigation and Imaging (SCINI) for studying the environment below the ice shelf; Icefin for gathering data on the water column, ice, and benthic environments; Artemis for analyzing water, ice and microbiology; Airborne Geophysical Platform, a radar system for remote sensing of the cryosphere; and SCINI-Deep for working alongside underwater drills and providing science imaging below ice.

NASA, which funds SIMPLE's research, plans to launch a probe to Europa in the early 2020s. The Europa Multiple-Flyby Mission, as it's named, will map the icy moon's surface, searching for thin enough ice for future landers to drill through to access the liquid ocean below. The SIMPLE team rehearsed this by flying a similar ice-penetrating radar over the Ross Ice Shelf in 2013 and 2014, and using Artemis from below the ice to confirm the accuracy of the readings.