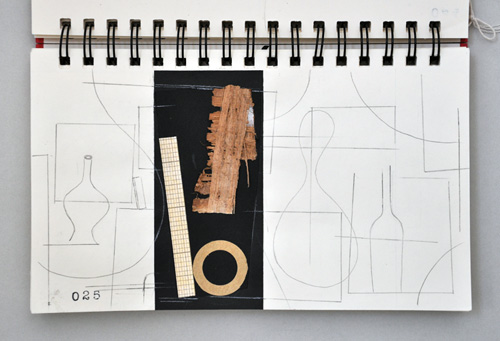 The 1988 Madrid Protocol, as I mentioned yesterday, calls for all Antarctic Treaty countries to remove their old trash as well as their newly generated waste from the continent. Twenty years on, cleaning up the old stuff remains the taller order because of irreversible early waste management practices. One such practice involved bulldozing rubbish out onto sea ice during winter to have it sink when the ice broke up in spring. "Sea-icing," as it was called, had its heyday from 1955 (when McMurdo Station was built) to 1981 (when sea-icing was discontinued). During this period, scores of fuel drums, machinery and scrap metal accumulated off McMurdo's shores. Open burning, untreated sewage, oil and chemical spills, and coastal landfills also contributed high concentrations of hydrocarbons, PCBs, and other toxic chemicals to the water and bottom sediments. 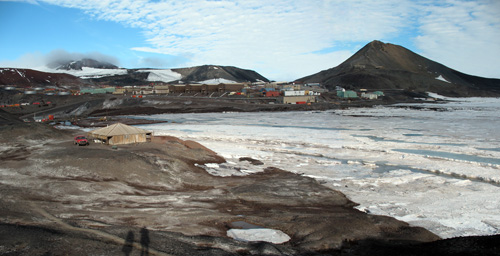 The primary dumping ground during those decades was Winter Quarters Bay, seen here in January '09 with a view towards McMurdo. Robert Falcon Scott had used this natural harbor to anchor his ship Discovery for two winters during his 1901-04 expedition. During their stay, he and his crew built the historic Discovery Hut seen at left. Winter Quarters Bay would never be that clean again. By the 1990s, the cove was deemed one of the most polluted spots on Earth. ("Testing Tainted Waters.") Despite the clean-ups, contamination still exists and is likely to remain for some time. One reason is that hydrocarbons break down at very slow rates in Antarctic temperatures. Another factor is the cost and logistics of retrieving vast quantities of sunken trash. According to a 2001 New Zealand sponsored study, researchers revealed 15 vehicles, 26 shipping containers, and 603 fuel drums among approximately 1,000 items strewn across the Winter Quarters seabed. In addition, a 2005 survey determined that the act of decontaminating the bay risked creating greater adverse environmental impact than leaving the waste where it is. ("Contaminants Measured Near McMurdo.") On a positive note, the bay's contaminants appear to be localized thanks to a shoal that prevents the toxins from spreading into open water beyond. I imagine Captain Scott cheering for that. And toasting the Madrid Protocol. And flipping over conscientious waste management. And high-fiving Shackleton over the ban on sea-icing. This could be good sketch material. In the meanwhile, today's drawing/collage juxtaposes stacks of stuff in Scott's hut with stacks of stuff submerged outside his door to illuminate the proximity and continuity between them. More artwork to follow on this theme.