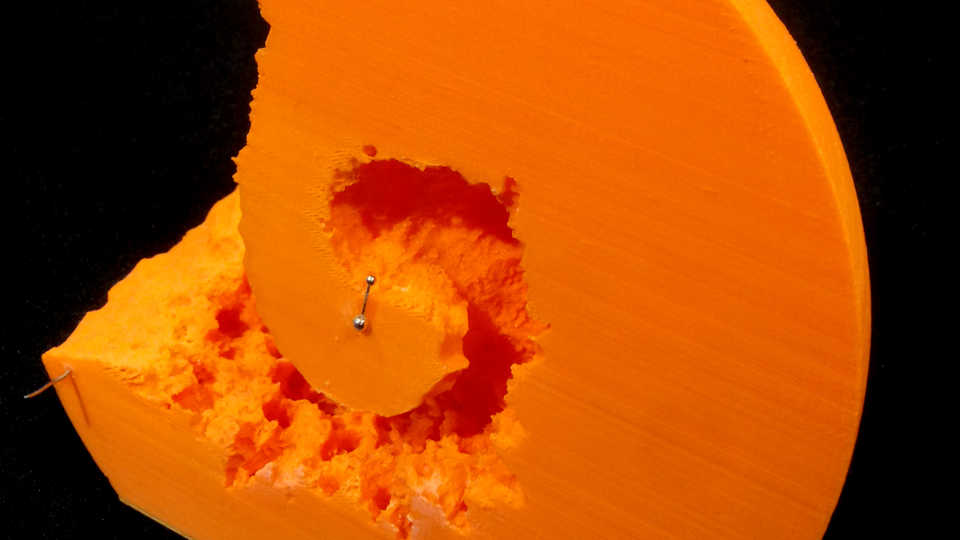 Stars die. They may live for millions or billions of years, but eventually, well… All good things come to an end, right?

As it turns out, the biggest stars go out with a bang, but stars about the size of the Sun end their lives with more of a whimper. At the 225th meeting of the American Astronomical Society (AAS) in Seattle this week, we’ve heard about the latest research into both bangs and whimpers. And the superstar of the news is an actual superstar!

Or rather, superstars. The Eta Carinae system has two stars orbiting one another: the more massive of the two started its life about 150 times as massive as our own sun (although it has slimmed down by perhaps 20% over time, blowing off mass through strong winds), whereas the smaller star weighs in at a mere 30 times the mass of the Sun (although astronomers didn’t even know of its existence until 1996).

At a press conference on Wednesday, Michael Corcoran of NASA’s Goddard Space Flight Center described more details of the system. The bigger star emits about five million times as much light as the Sun, while the smaller shines about a fifth as brightly as its big brother. Both stars shed mass in strong winds: the bigger one emits a dense, relatively slow wind (at a mere million miles an hour), whereas the smaller one's more tenuous wind travels about six million miles an hour! As Corcoran quipped, “For stars mass determines their destiny; for massive stars, mass loss determines their destiny.”

The interaction between the stars’ intense winds every 5.5 years causes an extreme outburst, and the last one took place in August 2014. Astronomers around the world worked together on making observations during the event, to improve our understanding of the complex interaction between these two massive stars.

For the last 20 years, Corcoran and his collaborators have monitored the x-ray variability of Eta Carinae using two NASA satellites—the Rossi X-Ray Timing Explorer, which ceased operation in 2012, and the Swift Gamma-Ray Burst Mission.

Ted Gull, also of NASA’s Goddard Space Flight Center, presented corresponding observations made by the recently-repaired Space Telescope Imaging Spectrograph (STIS) aboard the Hubble Space Telescope. The observations reveal clouds of material far from the stars expanding at 450 kilometers per second—or 100,000 miles per hour.From the ground, an international network of observatories, including both professional and amateur astronomers, monitored the 2014 outburst from the Southern Hemisphere (we can’t see Eta Carinae from Seattle or San Francisco), led by Mairan Teodoro at Western Michigan University. They made use of a feature in the stars’ spectrum that was only discovered back in 2003! And whereas the x-ray observations reveal changes in the smaller star’s hot, high-speed wind, the ground-based observatories were monitoring changes in the more massive star’s dense, low-velocity wind.

All these observations have allowed astronomers to develop and refine a computer simulation of the Eta Carinae system. (In fact, that simulation is run on the Pleiades Supercomputer at NASA’s Ames Research Center in the Bay Area.) You can see the results on YouTube, but Thomas Madura, yet again of NASA’s Goddard Space Flight Center, presented the supercomputer simulation data in an especially interesting way—using 3D printed models!

You can see an image of one of the models above (printed in orange to reveal details and photograph well, according to Gull), a slice through the simulation showing the two stars as tiny metal dots connected by a thin wire. The bigger star’s denser wind is printed in orange, while the smaller star’s hotter wind shows up as the crenulated cavity spiraling away from the stars. This represents a snapshot in time about three months after the stars’ closest approach. According to Madura, the 3D prints allowed the research team to discovered “fingers” of material—and a “hole” where there’s no wind-wind collision.

(The files to generate your very own 3D prints will be made freely available, but as of this writing, there’s no link on the NASA site to download the files. But please check back later! We’ll post the links as soon as they go online.)

Eta Carinae will likely come to an explosive end when the more massive star goes supernova at some point in the “astronomically near” future. A definite bang!

On Thursday morning, Bruce Balick of the University of Washington gave an update on recent research into stars on the whimpering end of the spectrum, which end their lives in gorgeous death throes called “planetary nebulae.” (Centuries ago, astronomers observing these objects thought they resembled planets, but they actually have nothing to do with planets.) The Hubble Space Telescope has taken numerous gorgeous images of these spectacular structures, which Balick and his collaborators have studied extensively. Balick compared these events to eruptions, not explosions, rather poetically suggesting that you can think of a planetary nebula “as a cloud of smoke which escapes from a burning log as it collapses and crumbles into embers.”

Images of planetary nebulae resemble bubbles, boxes, butterflies, and hourglasses, among a host of other shapes. Interestingly, many of these intricate forms seem to result from the interaction between two stars. But instead of the violent collisions that cause Eta Carinae’s outbursts, the gradual sloughing off of the stars’ outer layers create stunning aesthetic experiences.

We’ll wind up the week with a review of some other items from this week’s AAS meeting, so tune in tomorrow for more astronomical news!