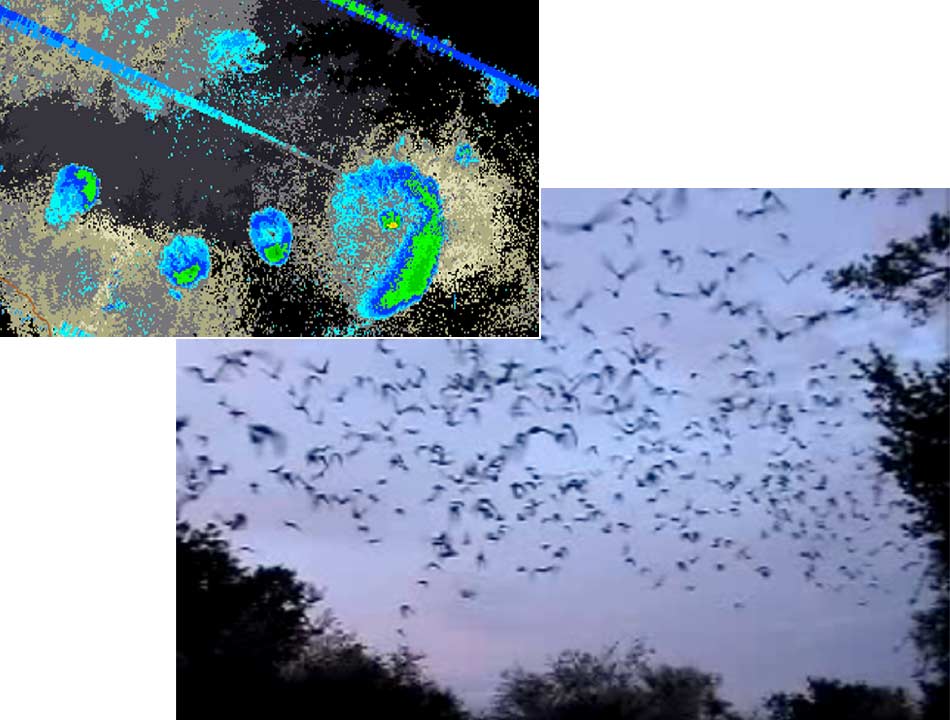 Biologists, using the same technology as meteorologists, are tracking the behavior and movement of insects, birds and bats in the skies.

Reporting at the AAAS Meeting in Washington DC last week, the multi-disciplinary scientists discussed using radar to look at the aeroecology-- the interactions of organisms in the lower atmosphere.

Using “doppler” weather satellites, a biologist like Winifred Frick of UC Santa Cruz is able to track the movement of Brazilian bats in Texas. These bats are important in the agriculture of the area-- eating insects that would otherwise be crop pests. Frick stressed that these bats are observable in a cave, but not in-flight-- they are too small for transmitters. But with the radar she was able to look at the broad scale migration and the phenological patterns across this particular population.

This information is essential to know as the climate changes because seasonal changes and conditions heavily influence the animals’ behavior. When bats emerge from their caves too early, they risk predation. When they emerge too late, they miss their dinner-- the insects. With the radar data, Frick learned in dry conditions bats will emerge sooner, in wet, later.

The technology is incredible. Meteorologists can measure the amount of raindrops in a raincloud and now there’s an algorithm to figure out the amount of bats in a “bat cloud”. The radar can also distinguish between birds, bats and insects. Frick mentioned how she could watch the radar and see a cloud of pink insects fly over a bat cave and then follow a yellow cloud of bats emerge and overtake that pink cloud.

In addition, there is 20 years of data from these radars that the scientists can comb through to look for patterns in different areas for different species.

(Science in Action interviewed Dr. Frick on camera recently about the white nose fungus that is killing bats on the East Coast. Stay tuned for that story.)