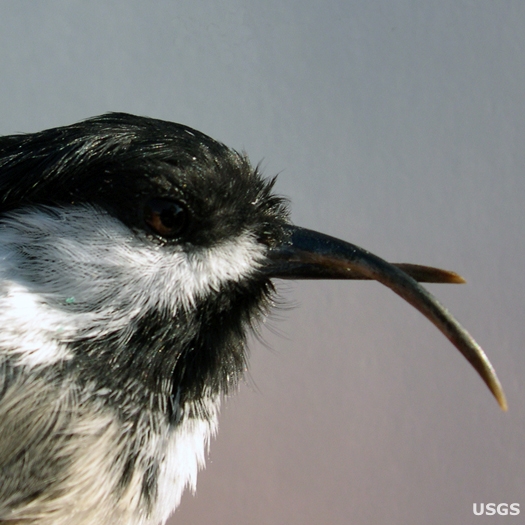 There are unnerving echoes of the Chytrid fungus that has swept through a wide range of amphibians, the fungus killing off bat colonies in the Northeast and the colony collapse disorder in honeybees.

That’s Andrew Revkin, in his Dot Earth blog in the New York Times, writing about avian keratin disorder—a disorder of unknown origin affecting bird species in the Pacific Northwest and Alaska at ten times the usual rate over the past decade.

USGS biologists published two papers (they can be found here and here) last week about this disorder that causes beak deformities across almost 30 different species of birds. Stunning news! The studies and Revkin’s comparison really got our attention.

We asked our own bird expert, Dr. Jack Dumbacher (Curator and Department Chair of Ornithology and Mammalogy), about this epizootic (an epidemic among wildlife).

There are a couple dozen species that appear to be affected, but the two most impacted appear to be Black-capped Chickadee (Poecile atricapillus), and Northwestern Crow (Corvus caurinus). Other corvids (jays, ravens, etc.) also appear to be more affected.  Although there were some reports in the early 1990s, the number of affected birds appears to have peaked in the 2000-2001 season, and again in the 2006-2007 season.  It seems to be more prevalent in adults, suggesting that it is an acquired condition.  It appears to most profoundly affect the keratin layers of the bill, causing the bill to overgrow and often cross, but it can also affect other keratinized layers of skin, legs, feet, and claws.

The deformed beaks hinder the birds’ ability to eat, clean themselves, and care for their young.

Jack expressed surprise about the findings:

I had known of strange growths caused by knemidocoptes mites, and these can sometimes cause bills to overgrow, scales to enlarge or slough off, and other deformities.  I’ve even seen these in the field (in South African Cape Robins).  But this was specifically examined, and these birds appear not to have knemidocoptes mites.  I’d certainly not heard of this in multiple species in one place.

Some diseases—like avian pox or the disease caused by West Nile Virus—have affected multiple species, and have had significant impacts across bird species. In parrots, a circovirus causes a disease called Psittacine beak and feather disease, and can sometimes cause overgrown beaks and crossed beaks.

The cause remains unknown, and it may prove challenging to discover.  Many factors require consideration, including environmental contamination, bacterial, fungal, or parasitic infections, and dietary deficiencies.

Jack provided some insight and hope for response from the community.

It is hard to say.  The authors looked at the most likely causes—knemidocoptes mites, malnutrition, liver malfunction, other diseases, and nothing came up positive.  It is possible that this is caused by a new disease agent that is not yet known.  For example, when frogs first began declining, it was hard to pin down the cause, but now we have some evidence that a fungal pathogen—Chytrid fungus—may be part of the cause. There may be an unknown pathogen causing these deformities in birds.

One hopes that now that these excellent papers have been published, we will all keep an eye out for such issues.  The USGS has requested information on this phenomenon, and they have set up a website that discusses it and allows you to report an incidence.

Scientists and bird watchers alike can help researchers learn more. Jack, who has done virus research in avian populations around the world, hopes to lend a hand (and needle) to the project, too. Stay tuned.