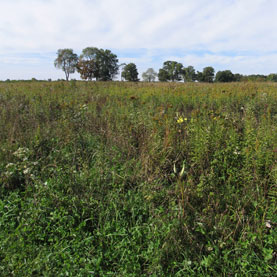 With drought and rising food prices, using corn for fuel seems, less and less, a good alternative to fossil fuels. We need better solutions for biofuels—here’s a summary of some recent articles and studies that hope to point us in that direction.

An article published earlier this month in the New York Times demonstrates how the high price of corn in places like Guatemala is devastating:

Recent laws in the United States and Europe that mandate the increasing use of biofuel in cars have had far-flung ripple effects, economists say, as land once devoted to growing food for humans is now sometimes more profitably used for churning out vehicle fuel.

And, cows are feeling it, too, according to a recent post on Wired called “When Corn Costs Soar, Cows Eat Cake.” Literally.

But researchers across the country are looking for alternatives.

A study in Nature this week begins:

Legislation on biofuels production in the USA and Europe is directing food crops towards the production of grain-based ethanol which can have detrimental consequences for soil carbon sequestration nitrous oxide emissions, nitrate pollution, biodiversity and human health.

So the researchers ask, why not use some of the native grasses and flowers that grow on fallow land anyway? Scientific American describes it:

… species such as goldenrod, frost aster, and couch grass, among others—can deliver roughly the same amount of biofuel energy per hectare per year if fertilized, yet also reducing CO2 by more than twice as much as corn.

The scientists also propose small, local biorefineries to process the fuels, saving on transportation. But the ideas are not without their critics—NPR offers a few of the arguments against the study.

A recent article in the San Francisco Chronicle reports on an older study in Nature about local researchers developing a new biofuel from a process formally used to create explosives. The process could potentially use sugar sources from non-food plants and contains more energy per gallon than corn-based ethanol. The article says that in California, the fuel could be used “in trucks, trains and other vehicles that need more oomph than hybrid or battery power can provide.”

We’ve written in the past about algae biofuels. How about fungi biofuels? An NSF-supported study looks at the potential of endophytes, fungi that live inside of plants and naturally produce monoterpenes, which can be used as fuel. And the fungi could produce this biofuel from agricultural, forestry and urban wastes! NSF Discoveries has more information about the cutting-edge idea.

Any way you look at it, our future will be fueled by a variety of sources—hopefully all clean and renewable…