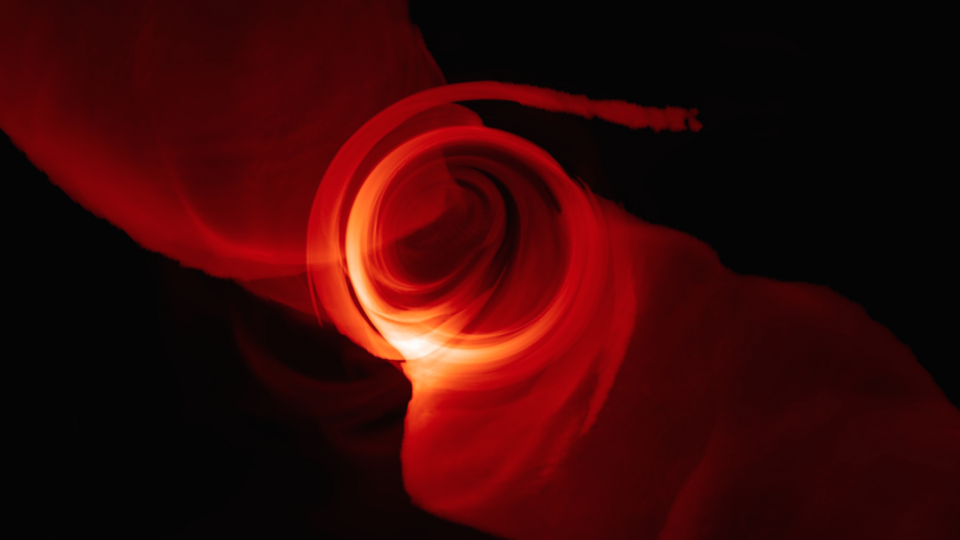 A computer model shows the asymmetrical bending of light and matter around a supermassive black hole.

What would an astronomy conference be without a discussion of black holes? At the 227th Meeting of the American Astronomical Society (AAS) held this week in Kissimmee, Florida, the most popular black holes under discussion are the supermassive black holes that reside at the centers of most sizable galaxies—including our own Milky Way Galaxy.

Feryal Ozel of the University of Arizona kicked off the second full day of the AAS meeting with a plenary talk about the Event Horizon Telescope (EHT), a project that will eventually link a dozen radio telescopes around the world to observe relatively nearby supermassive black holes. The resulting super-sensitive, high-resolution meta-telescope will be able to resolve the event horizons of these objects. Basically seeing as close to the black holes as we possibly can.

We don’t observe black holes directly (black hole, black space, big challenge); instead, we observe the effect of black holes on their environment. Most notably, astronomers have tracked stars near the center of the Milky Way rapidly orbiting our central black hole, which effectively proved its existence (check out the TED talk by UCLA’s Andrea Ghez for a great description of how that works). In short, the black hole’s enormous mass causes nearby stars to zip around quickly, and by measuring their speed and trajectories, we can sort out where the black hole resides and determine its mass. We can also observe gas compressed by the black hole’s gravitational influence, which causes the gas to heat up and radiate energy we can detect from Earth.

Osel and her team are trying to take this a step further and look at how the supermassive black hole’s gravity warps light around it. If you’ve seen the movie Interstellar, you’ve actually already seen a remarkably accurate depiction of what happens to light around a black hole: Einstein’s Theory of General Relativity predicts that we will see an asymmetrical ring of light encircling the black hole’s “shadow.”

Of course, astronomers also need to know what they’re looking for… Unwilling to count on Interstellar as a visual guide, the team at the University of Arizona has built a specially-designed supercomputer to run through various simulations of what the region around our central black hole looks like. They can rapidly track the trajectories of millions of photons interacting with the black hole and its environment, and they can change the physical parameters (magnetics fields, thermodynamics, etc.) of their computer model to understand how the appearance of the black hole changes under different conditions.

The EHT has already successfully measured the strength of magnetic fields near the Milky Way’s central black hole, using telescopes in only three locations situated relatively close together (California, Arizona, and Hawaii). When the more global network comes online in the next year or so, the project should be able to discern not only the black hole’s event horizon but also reveal much more about what is transpiring very close by, testing the Theory of General Relativity and refining our ideas about how black holes affect their local environment.

And that’s just in our own Milky Way! The EHT will try the same tricks with more distant supermassive black holes—for example, the monster at the center of the galaxy M87. Stay tuned.

In the meantime, there are plenty of black holes at the centers of more distant galaxies, ripe for studying. A few galaxies (at latest count, about a dozen) sport two black holes, and the prevailing theory is that these result from the merger of two galaxies, each with its own black hole, coming together in a big, happy gravitational dance. Eventually, the two black holes themselves will merge, becoming one even supermassivier black hole (this likely happened in M87, probably more than once), but in the meantime, a few galaxies are doubly black hole blessed.

Julia M. Comerford from the University of Colorado, Boulder, described one such rare find—the galaxy SDSS J1126+2944 (and as Comerford noted, that’s its shortened name) which shows evidence of two black holes, separated by about 7,000 light years (about a third the distance separating Earth from the Milky Way’s aforementioned central black hole). The northern black hole is considerably brighter, while Comerford described the southern black hole as more of a “beauty mark” in images of the galaxy.

The northern black hole has the expected entourage of stars surrounding it, but the “beauty mark” southern black hole has a significantly smaller number of stellar hangers-on. When the two galaxies that ended up forming SDSS J1126+2944 merged, perhaps the southern supermassive black hole simply got stripped of its stars, making it the “biggest loser” of the press release title. But another possibility is that it’s an intermediate-mass black hole, not of the supermassive size but larger than could be formed by a single star… An even rarer beast than galaxies with two black holes!