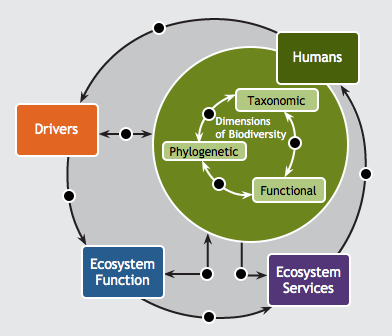 We’re running out of time to find and discover all the species on Earth and the benefits they provide. You’ve heard that here many times. But what are some of the solutions?

Here’s one: Dimensions of Biodiversity, a program for graduate students funded by the National Science Foundation. It currently boasts 112 grad students from 14 institutions in five countries, with 23 faculty members advising these students.

Their mission? According to their website, “To prepare the next generation of biodiversity researchers for higher levels of academic and scientific interaction, while simultaneously advancing, synthesizing, and baselining knowledge of biodiversity science on a global scale.”

At the AAAS meeting last month, three members of the program talked about a few of the various projects of Dimensions of Biodiversity.

Selina Heppell, a professor at Oregon State University, discussed a project to measure biodiversity in the oceans utilizing commercial fishing data. Samantha Davis, a graduate student at UC Santa Barbara, described three separate projects looking at the variability in biodiversity in tropical forests. And Ailene Ettinger, a student at the University of Washington, looked at data about the efficacy of citizen science and the data collected by non-scientists. (Her PowerPoint opened with a picture of citizen scientists on the Academy’s roof!)

The young researchers are using existing data in each study, looking at old observations in entirely new ways. All of the projects span many institutions and approach biodiversity beyond species numbers. They look at the diversity of individual species, of course, but they also look at the diversity of groups of species and functions of each species. For example, you can look at functional biodiversity as how many herbivores, carnivores, top predators, and bottom dwellers exist within an ecosystem. Their diagram, above right, demonstrates this and the effects and influences to an ecosystem.

Students drive each endeavor, but they don’t need to select something within their particular program of study. And like the iGem teams, each project includes a diverse group of students—biologists, statisticians, writers, you name it.

And the results? A recent paper about remote sensing in rainforests and two more publications forthcoming (see here and here). Also an online blog that was introduced earlier this year at the popular Science Online conference.

The Academy supports a similar NSF-funded program, this one for undergraduates. The Summer Systematics Institute has been running for an astounding 17 years and “addresses critical issues such as, world-wide threats to biodiversity, the origins and diversification of life, phylogenetic systematics and evolutionary biology, which have become critical components of undergraduate education.” Stay tuned for a video about the SSI program, available on Science Today later this year.