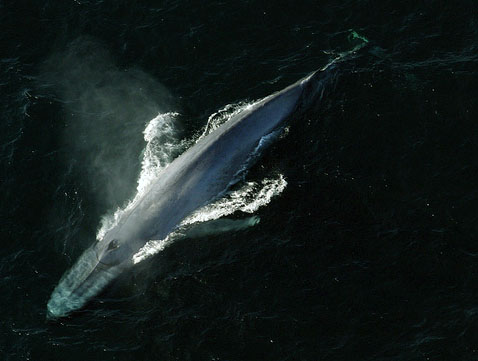 Blue whales are bouncing back—if a 100-foot, 190-ton aquatic animal can bounce, that is. Not all blue whale populations are increasing (especially near Antarctica, where the population is a tiny fraction of what it once was), but California blue whale numbers are rising, and are possibly close to carrying capacity, according to a new study in Marine Mammal Science.

Researchers from the University of Washington modeled the size of the California blue whale population—a group found along the eastern side of the Pacific Ocean from the equator up into the Gulf of Alaska—over time using data from various sources, including unreported Soviet catches before the whaling ban in the 1970s and more recent recorded acoustic calls from throughout the North Pacific. (Many of those data were published several months ago in PLoS ONE, by some of the same scientists.)

“The recovery of California blue whales from whaling demonstrates the ability of blue whale populations to rebuild under careful management and conservation measures,” says Cole Monnahan, lead author of both studies and a doctoral candidate of the University of Washington.

The population growth has slowed down, according to the MMS paper, more due to carrying capacity than ship strikes. That’s in spite of the sobering number of ship strikes: there are at least 11 blue whales struck a year along the U.S. West Coast, far more than the “potential biological removal” of 3.1 whales per year allowed by the U.S. Marine Mammal Protection Act.

The researchers are confident that, although ship traffic is likely to increase in the future, the California blue whale population will remain stable. But we should keep vigilant about the whales’ protection, the team says.

“There is still going to be ongoing concern that we don't want these whales killed by ships,” says co-author Trevor Branch, also of the University of Washington.

For more information on different blue whale populations, check out Monnahan’s blog here. Want to learn more about carrying capacity? We cover it in a video we produced for the Khan Academy here.