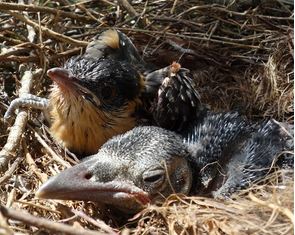 Is the cuckoo-crow relationship parasitic or mutualistic?

Many species of cuckoo are brood parasites—they place their eggs in nests of other birds, often to the detriment of the host bird. The great spotted cuckoo (Clamator glandarius) is one of those parasites, laying its eggs in the nests of carrion crows (Corvus corone) in the region surrounding La Sobarriba in León, Spain.

Researchers have been observing and collecting data from these crow nests (741 of them) for the past 16 years. Daniela Canestrari, a scientist from the University of Oviedo, noticed that some of the young crows were more successful than others—many are carried off for other animals’ lunch. And it appeared that the crows’ success varies heavily from nest to nest.

Canestrari wondered if the presence of cuckoo parasites affected a nest’s success or failure, so she examined the years of collected data. Surprisingly, crows fared better when they had a cuckoo parasite in their nest.

But why? Canestrari investigated the nests to find out. She found that, when threatened, the juvenile cuckoos emit a disgusting secretion from their cloaca that deters predators. Canestrari described the foul stuff on NPR: “…it’s kind of blackish, it’s liquid, sticky, and it has kind of rotten smell.” Gross!

Chemical analyses on the secretion revealed that it contains numerous acidic and toxic compounds that manage to repel predators. So, in effect, as fledgling cuckoos protect themselves from predators, they also protect their young crow nest-mates. Since the crows reap this benefit from the cuckoos’ parasitism, it appears the relationship between the two species can be mutualistic—beneficial to both.

Canestrari and her colleagues say cuckoos in their nest aren’t always advantageous to the crows. According to the study, published in the recent edition of Science, “The outcome of these counterbalancing effects fluctuates between parasitism and mutualism each season, depending on the intensity of predation pressure.”