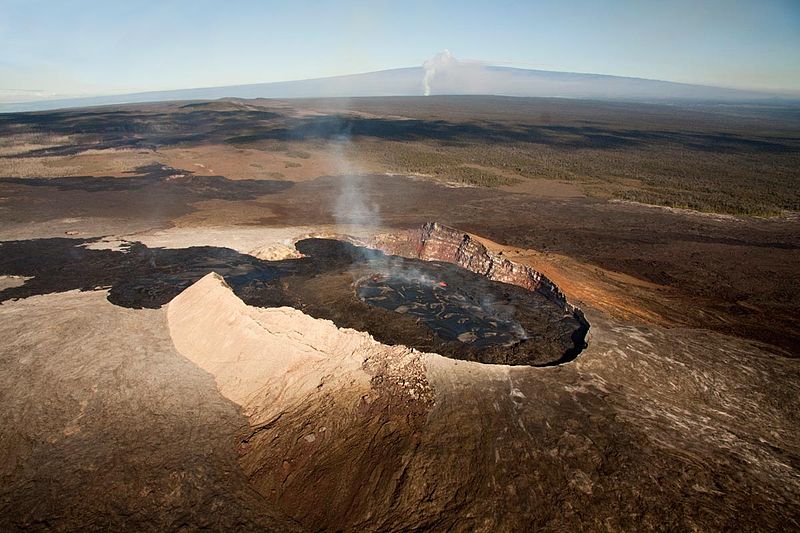 Today at the American Geophysical Union (AGU) meeting at the Moscone Center, there were battles, angry goddesses, and hot ash traveling at hurricane speeds… All at just one press conference!

Don Swanson of the USGS Hawaiian Volcano Observatory calmly told us to be afraid—be very afraid—of the gentle-appearing Kilauea volcano on the island of Hawaii. Well, he may not have sounded so dire. But he did want us to know that Kilauea had very long-term explosive periods in the past and will likely again, threatening the local population and the 5,000 daily visitors to Hawaii National Park.

The Big Island's volcanoes are known for their beautiful lava flows, and Kilauea is no exception. But looking at the past using carbon-dating techniques, Swanson and his team have found that for the last 2,500 years, Kilauea had been more explosive (60%) than gentle lava flowing.

The most lethal eruption known from an American volcano occurred at Kilauea in 1790. Most likely, several hundred people died, but contemporary accounts vary. A battle at the time, between the warriors of Keoua and Kamehameha, put several men near the summit at the time of the eruption. According to Swanson’s presentation, “the conditions of the bodies suggests that a pyroclastic density (known as a “PDC,” but often just called a surge) engulfed the victims.” PDCs are a mixture of hot gas and volcanic ash that travel at hurricane velocities.

Footprints were found in the muddy volcanic ash, and in Swanson’s dramatic fashion, his presentation reported, “They could record someone’s last footsteps.”

Swanson wants us to be aware that it could happen again and without much warning. And not just as little blips: Kilauea could be explosive for very long periods of time, as the historic record shows. While Swanson and other scientists are unable to predict the occurrence of damaging eruptions well in advance, small earthquakes and rock-fall are likely to precede the events, allowing time for evacuation.

Moral of the story: Don’t be fooled by the gentle beauty of Hawaii’s lava-flowing volcanoes. Pele still has some rocks up her sleeve!