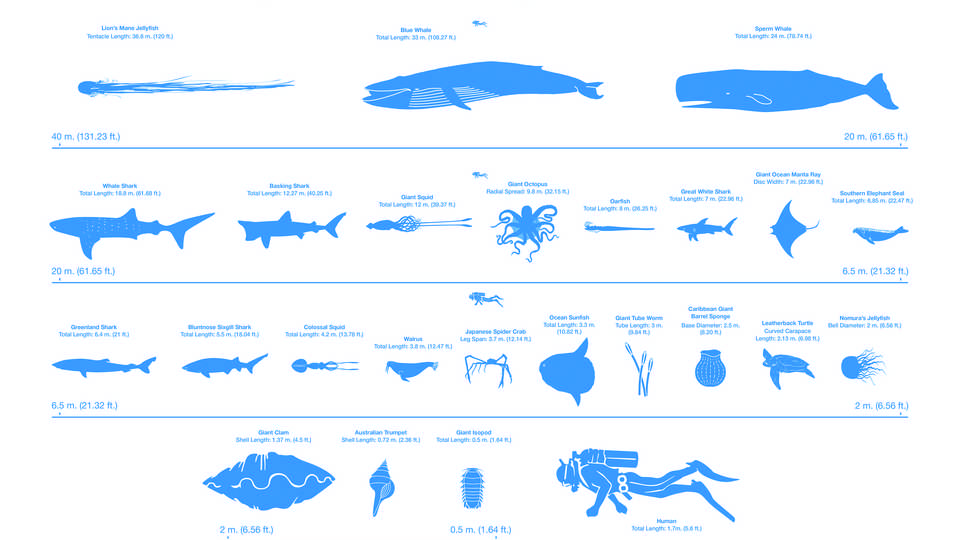 Does size matter? It does to 6'3" scientist Craig McClain, of the National Evolutionary Synthesis Center in North Carolina. His research explores the science of body size in animals to understand the consequences of size differences in animal interactions, biodiversity, and the carbon cycle.

In his size studies, he often noticed mistakes in reported body size for marine creatures, especially his favorite, the giant squid. Despite reported lengths of 60 feet or more, he knew that reliable estimates put the large cephalopods nowhere near that size. A colleague who studies whale sharks noticed the same thing—enormous exaggerations of how large these stunning fish get.

So what do scientists do when they notice errors? They try to get to the bottom of them. “But we quickly realized that this was bigger than the both of us,” McClain says. “No pun intended.” So they reached out to experts in other fields, too. McClain also selected five undergraduates from one of his classes at Duke University. “I let them know it would be a colossal project. No pun intended.” The students picked a few animals to study in-depth, but there was more to the project, too.

McClain is also a science communicator, writer, and editor of Deep-Sea News. Engaging the public in science is hugely important to him. So his students’ other job was to blog and tweet about their research. On Twitter, people would tweet their height with the hashtag #sizeme, and the students would compare their size to a marine animal.

The results? Publication this week of a comprehensive study on the body sizes of 25 ocean giants. McClain and 15 co-authors assembled data from existing scientific publications, mainstream media, and even eBay. “It was my longest writing project to date,” McClain says, “with 70 pages and 40 figures.” Fitting for a study about size, no? “We never found a case where there were larger specimens than has been recorded, but we found in many instances, the species were smaller than had been thought.”

McClain continues, “The tallest human on record is 7’11”, but most humans are nowhere near that.” More realistic data on the size range of these species could be useful in studies that use body size as predictors of species abundance and range, energy use, and more. A large graphic makes the size comparison easy to see (above and here), and the study is easy to follow for more details. Or hit the website, The Story of Size.

What’s next for McClain? “The [scientific] questions have only gotten bigger,” he says. (No pun intended?) He’s looking into the evolution of body size in sharks and cephalopods, the communities that feed on deep-sea wood, and the evolution of metabolism of animals through time. And perhaps a similar size project with paleobiologist colleagues to determine more accurate sizes of prehistoric ocean giants (like this one, described this week) where he can involve undergraduates and the public again. “The only way to do it is to have lots of people involved.” Sounds huge! (Pun intended.)