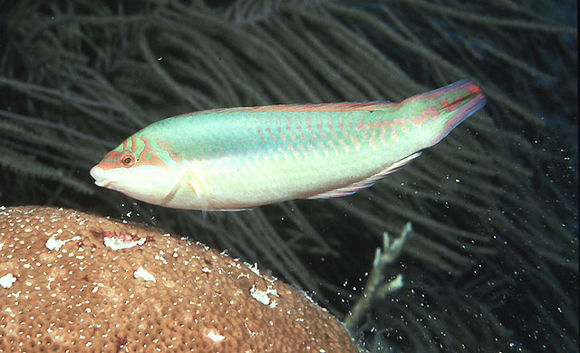 How do fish travel? Sounds like the beginning of a joke, right? I mean we all know that fish swim. But how about over long distances, across oceanic barriers?

Luiz Rocha and his colleagues set about finding out how coral reef fish make long distance journeys across the Atlantic (about 3500km/2200 miles near the equator) or the freshwater and sediment discharges of the Amazon and Orinoco rivers in South America (about 2300 km/1500 miles).

Coral reef fish don’t move a lot as adults, so the long held belief was that the fish dispersed in their larval stage. The larval stage can last 10 days for some species and 100 days for others and it may take 50 days to cross the Atlantic. Looking at the variables and the distribution for 985 species, the researchers found that the larval stage actually had little to do with which fish crossed the large distances and barriers—or how they managed to do it.

Dispersal seems to factor on other specifics—the size of the adult fish, whether the fish could use flotsam, or sargassum mats, as habitats across the barriers and if the fish were generalists—able to adapt to new habitats and food. Luiz and his collaborators published their findings last week in the Proceedings of the Royal Society: B. From the abstract:

Successful establishment after crossing both barriers may be facilitated by broad environmental tolerance associated with large body size and wide latitudinal-range. These results highlight the need to look beyond larval-dispersal potential and assess adult-biology traits when assessing determinants of successful movements across marine barriers.

Luiz gave us some examples:

The Brown Chromis (Chromis multilineata) is a great example of a fish that has a short larval stage but crosses barriers using floating substrate.

Many species of parrotfishes in the Caribbean have long larval stages but are restricted to the Caribbean, and found neither in Brazil nor in the other side of the Atlantic.

Some species of wrasses of the genus Halichoeres cross the Amazon barrier but don't survive on the other side because they can't find their preferred habitat. In this genus, the specialists tend to have smaller geographical ranges than the generalists. One of the examples is Halichoeres poeyi, a wrasse that lives not only in coral reefs, but also rocky reefs and seagrass. This wrasse is continuously distributed from South Brazil to Florida, and all of the other (more specialized) species in this genus are different in either side of the Amazon barrier.

The study built upon a paper the team published in 2008—a culmination of five years of work, creating a database of 1,300 Atlantic species of coral reef fish. The database includes many variables for each species—biogeographic data, reproductive mode (which is a proxy for length of the larval stage), spawning information, size as an adult, habitat needs, and more.

Luiz Rocha joined the Academy less than a month ago, as a curator of ichthyology, specializing in coral reef fish. Originally from Brazil, he fell in love with these fish at an early age—snorkeling since the age of five! He comes to the Academy from the University of Texas. Stay tuned for more of his research.