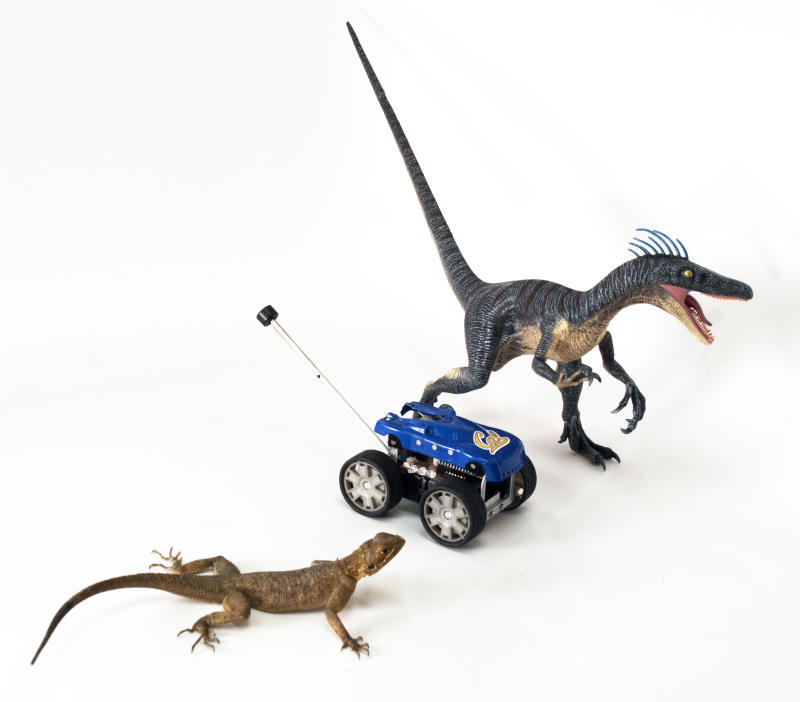 Here’s a tale about tails—lizards’, robots’ and dinosaurs’ tails to be exact.

Tails are often an enigma; many creatures have them, but scientists know little about their function, particularly for extinct species. Dinosaur tails are no exception. Researchers have speculated that some species' tails were used in fighting, whereas others for stability.

Our friend Robert Full and his colleagues at UC Berkeley found how when leaping, red-headed African Agama lizards swing their tails upward to prevent them from pitching head-over-heels into a rock. You can see a video of this feat here.

“We showed for the first time that lizards swing their tail up or down to counteract the rotation of their body, keeping them stable,” says Full. “Inspiration from lizard tails will likely lead to far more agile search-and-rescue robots, as well as ones having greater capability to more rapidly detect chemical, biological or nuclear hazards.”

While Full is a biology professor, he is no stranger to robots, Scientific American reports.

These are just the latest developments in Full’s full-on flirtations with robots. He has worked with engineers since the mid-1990s when he helped to develop the crab-inspired Ariel, a minesweeping robot… that can look for buried explosives in surf zones. In 2008 Full co-founded the Center for Integrative Biomechanics in Education & Research (CiBER) at University of California, Berkeley, to further integrate the work of biologists and engineers when designing technology.

“Engineers quickly understood the value of a tail,” UC Berkeley engineering graduate student Thomas Libby explains. “Robots are not nearly as agile as animals, so anything that can make a robot more stable is an advancement, which is why this work is so exciting.”

Full and his team received a surprise benefit from the lizard tail research: understanding how dinosaur tails function.  The new research tested a 40-year-old hypothesis that the two-legged theropod dinosaurs—the ancestors of birds—used their tails as stabilizers while running or dodging obstacles or predators.

Indeed, just like the velociraptor depicted in the movie Jurassic Park, these agile dinosaurs may also have used their tails as stabilizers to prevent forward pitch, Full says. “Muscles willing, the dinosaur could be even more effective with a swing of its tail in controlling body attitude than the lizards.”

The research is published in the recent edition of Nature.