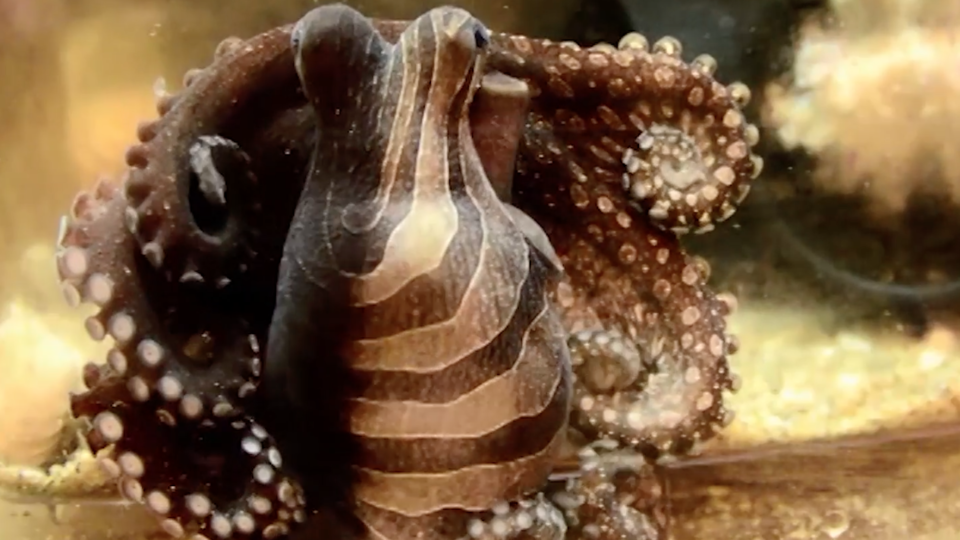 The larger Pacific striped octopus is a bit of an oddball. It was first discovered decades ago by Panamanian scientist Arcadio Rodaniche, and he reported behaviors too outrageous to be believed—so much so that the species was never formally described in publication. Rodaniche found the octopus unusually patterned, observed distinctive sociability—even when mating—and noticed astonishing predatory behavior. Instead of tackling prey with all eight arms, the larger Pacific striped octopus subtly taps its prey on the shoulder and startles it into its arms!

Today, Rodaniche’s observations are vindicated by a team of Academy scientists working with Rodaniche himself in publication in PLoS ONE. While it’s not the formal species description yet, it is confirmed observations of these nonconformist cephalopods in captivity here at the Steinhart Aquarium over the past few years.

Academy Fellow Roy Caldwell, of UC Berkeley, describes one of the octopus’s many unique behaviors. “I’ve never seen anything like it,” he says. “Octopuses typically pounce on their prey or poke around in holes until they find something. When this octopus sees a shrimp at a distance, it compresses itself and creeps up, extends an arm up and over the shrimp, touches it on the far side and either catches it or scares it into its other arms.”

Another eccentric behavior from the larger Pacific striped octopus is its mating technique. Most female octopuses have a reputation of eating their mates, and the males typically stay far away from their partners’ mouths when reproducing. But as Caldwell and Rich Ross, a senior biologist at Steinhart Aquarium, observed, couples successfully mated without extreme aggression or cannibalism. In fact, the male and female come together in an intimate beak-to-beak, sucker-to-sucker position. The team also observed pairs of octopuses feeding in the unique beak-to-beak position, sharing meals, and even cohabiting in the same den for days at a time.

Additionally, unlike other octopus species in which females tend to die after producing a single clutch of eggs, female larger Pacific striped octopuses can lay many clutches of eggs continuously over the course of their adult lives. While in captive environments, females laid eggs for up to six months and brooded for up to eight months. Even after their eggs began hatching, females continued to feed, mate, and lay hundreds more eggs—demonstrating yet another unusual behavior that the team believes is exclusive to this species.

“Personally observing and recording the incredibly unique cohabitation, hunting, and mating behaviors of this fascinating octopus was beyond exciting—almost like watching cryptozoology turn into real-life zoology,” Ross says. “It reminds us how much we still have to learn about the mysterious world of cephalopods.”

And not just in captivity. The team admits that the next step is to observe these odd octopuses in the wild. “Only by observing the context in which these behaviors occur in the wild can we begin to piece together how this octopus has evolved behaviors so radically different from what occurs in most other species of octopus,” Caldwell says.