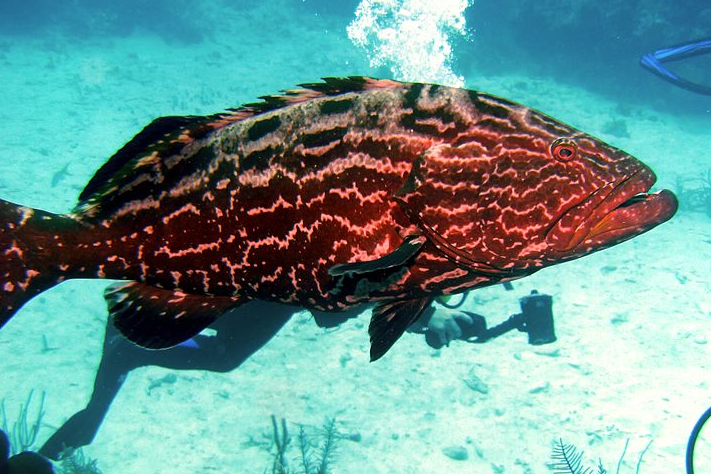 When you think of “grouper,” you might think of a tasty dish on a menu… But that could quickly change according to a team of scientists including the Academy’s own Luiz Rocha.

Groupers are a family of fishes often found in coral reefs and prized for their quality of flesh. But they’re facing critical threats to their survival. As part of the International Union for Conservation of Nature (IUCN) Species Survival Commission, researchers have spent the past ten years assessing the status of 163 grouper species worldwide.

Publishing in the journal Fish and Fisheries, the team reports that 20 species are at risk of extinction if current overfishing trends continue, and an additional 22 species are categorized as Near Threatened.

“Fish are one of the last animal resources commercially harvested from the wild by humans, and groupers are among the most desirable fishes,” says Rocha. “Unfortunately, the false perception that marine resources are infinite is still common in our society, and in order to preserve groupers and other marine resources we need to reverse this old mentality.”

Because groupers fetch a high price in the fish market (estimated to be a multi-billion dollar per year industry), they are often among the first reef fishes to be overexploited. Their disappearance from coral reefs could upset the ecological balance of these threatened ecosystems, since they are ubiquitous predators and may play a large role in controlling the abundance of animals farther down the food chain.

Unfortunately, groupers take many years (typically 5-10) to become sexually mature, making them vulnerable for a relatively long time before they can reproduce and replenish their populations. In addition, fisheries have exploited their natural behavior of gathering in great numbers during the breeding season. The scientists also conclude that grouper mariculture has not mitigated overfishing in the wild.

Although the prognosis is poor for the restoration and successful conservation of Threatened grouper species, the authors do recommend some courses of action, including optimizing the size and location of Marine Protected Areas, minimum size limits for individual fish, quotas on the amount of catch, limits on the number of fishers, and seasonal protection during the breeding season. However, the scientists stress that “community awareness and acceptance, and effective enforcement are paramount” for successful implementation, as well as “action at the consumer end of the supply chain by empowering customers to make better seafood choices.”