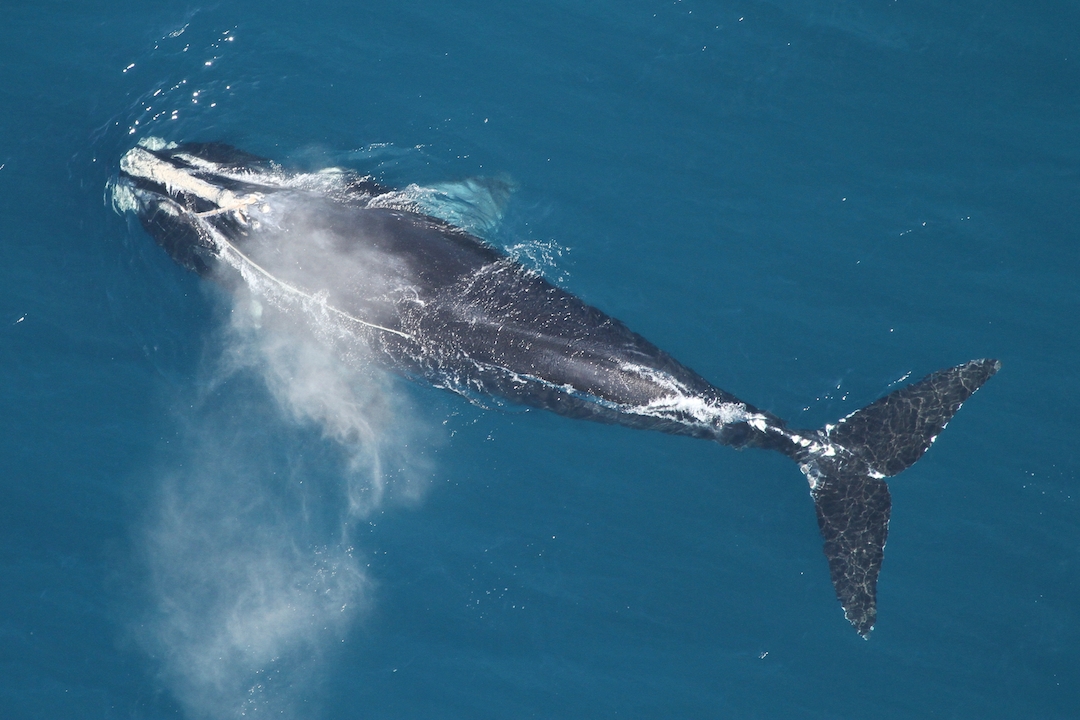 The whales’ further recovery is  hindered by at least one threat caused by humans:  entanglement in commercial fishing gear. Commercial fishermen aren’t trying to catch whales, but their gear gets in the way just the same.

According to a report from Yale University,

Scientists examining scars on whales estimate that 82 percent of North Atlantic right whales between Cape Cod and Nova Scotia have become entangled at least once. Each year an unknown number die.

The whales that escape drowning during their initial entanglement don’t usually get away unscathed. Often, they have hundreds of feet of leaded rope and gear wrapped around their bodies, dragging behind as they swim. The gear digs into their skin, restricts movement so they can’t breathe or feed, and weighs them down. They swim more slowly, dive less deep and eat less often, slowly wasting away. Some die from infection or hemorrhaging of wounds from the gear. One study found the average time of death after entanglement for baleen whales was six painful months; another found averages of more than a year.

But one group of researchers may have found a simple way to reduce whale entanglement: change the color of the fishing ropes.

Right whale researcher Scott Kraus and his colleagues are studying whales’ reactions to different-colored fishing gear. They monitored whales feeding in Cape Cod Bay, watching as the whales approached gear of different colors. They found the whales were better able to avoid red- and orange-colored gear, and more often bumped into black- or green-colored gear.

Michael Moore, director of the Marine Mammal Center at the Woods Hole Oceanographic Institution in Massachusetts, told the Associated Press:

Although the whales see their ocean world in black and white, it makes sense that they can differentiate orange from other colors since the clouds of zooplankton upon which they feed are orange in color.

Perhaps, Kraus said, if the whales are able to see the ropes, they can avoid getting tangled in them.

Kraus, of the New England Aquarium, presented the research at the Maine Fishermen’s Forum in February. He told the Associated Press that he plans to publish the preliminary findings in the next six months.  He’s also working with manufacturers to produce red ropes to be tested for durability and handling by lobstermen in Maine.

In the meantime, teams will continue to try to rescue entangled whales when they’re reported. It’s dangerous work, but their efforts can pay off. You can read about one young male right whale that was set free last month in Georgia.  And you can see more about what biologists learned from one particular entangled whale, called Eg 3911, here.