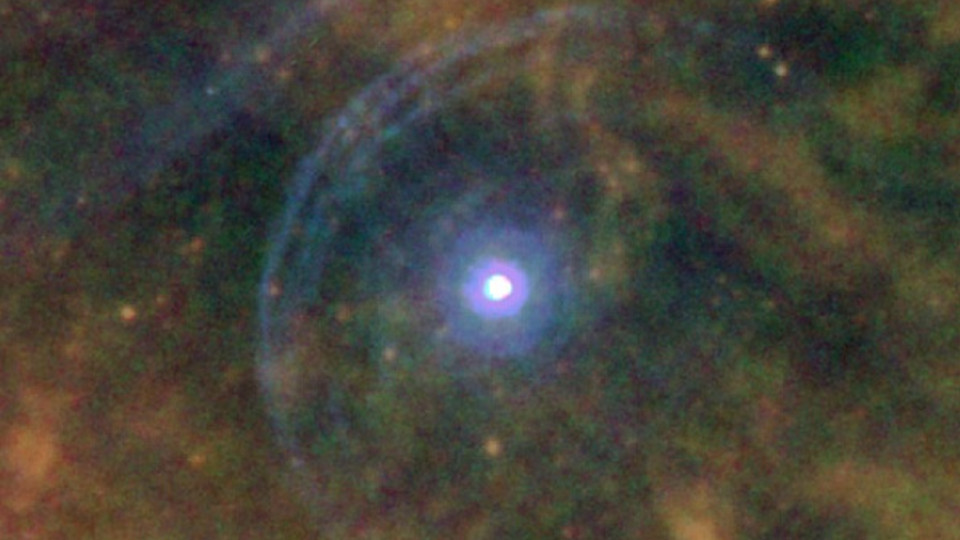 For the first time ever, human beings have an understanding about how the orientation of our planet has shifted over time, revealing that the Arctic has not always been close to the north pole of Earth.

For all the terrestrial planets, the orientation of their surfaces is determined by the surface itself. It might seem strange, but on an active world like Earth, if there were a great addition of mass to a specific region of the planet’s surface (such as a super-volcano going off somewhere like, I don’t know… Yellowstone?) that portion of the planet would literally and figuratively gravitate towards that world’s equator. Planetary scientists have long known that the midline of worlds, as determined by the planet’s rotation, play host to the tallest features. Due in part to the rotational bulge (think of a spinning blob of pizza dough) but now known to be a cause (and symptom) of the planet’s overall distribution of mass. It is perhaps no coincidence that the Hawaiian Islands—some of Earth’s most massive volcanoes, lie close to Earth’s equator.

The inverse is also true. Places that have less mass will move toward the poles. These features are a bit tough to spot on Earth, but the Moon bears a massive depressed region—Aitken Basin—thought to have resulted from a large, ancient impact. One of the biggest impact craters in the Solar System, it may have originally existed on the Moon’s midline latitudes but, over time, migrated down to its south pole as the Moon’s surface orientation changed. More evidence to support these findings is present in the Earth-facing maria. Later impacts and the addition of massive amounts of heavy iron-rich lava to the surface of the Moon shifted the Moon’s orientation over time but there was never another event as drastic as the Aitken Basin impact.

For the terrestrial planets, their past and present orientation may be divined by looking over their surface features. Take for example, Mars, a planet ruled by its volcanic past. Like the proposed Yellowstone scenario, the defining feature of Mars was a late-forming but gargantuan volcanic plain called the Tharsis plateau. The plateau is host to three massive shield volcanoes—Arsia, Pavonis, and Ascraeus Mons—and adjacent to the largest volcano in the Solar System—Olympus Mons. Ancient catastrophic eruptions in this region changed the global orientation of the planet, with the Tharsis region coming to rest neatly upon the equator.

How can this knowledge benefit us? I could suggest that it is always good to know the past of where you live, in case a past catastrophe occurs again, but there is a more practical benefit, as well. For places humans hope to visit and one day colonize, such as the Moon and Mars, bringing water is an expensive proposition, but using water uncovered in situ is a much more appealing prospect. Our orbiting missions have uncovered ice deposits near the surface of both worlds in their polar regions, but learning about how planetary poles have wandered over time might help our effort to expand our species’ reach and better understand these worlds. –Josh Roberts

The Curiosity mission is continuing her trek across the rocks of Mars. Mission scientists stopped by the American Geophysical Union (AGU) meeting last week to explain what she has found so far and what lies on the horizon (besides more rocks).

Gale Crater has proven to exceed all expectations set out before the mission landed. From orbit, detailed photographs revealed many types of exposed rock, but these rocks didn’t just vary in composition, they laid bare a huge span of martian geological time. Since Gale Crater is the lowest position in the local geography, the cracked and broken rocks around it would have allowed for groundwater to seep in and bring with it a broad sampling of the surrounding region. It can be hard to estimate, but mission scientists consider this to be a good reading of most of that ancient drainage basin.

At first, Curiosity rolled across smooth sand and stone—iron-rich materials that were once clay—but then had to cross a jagged and challenging region known as the Pahrump Hills, which damaged her wheels. These smooth bottom layers were ancient and tell us what Mars was like long ago, but the missing piece of the puzzle is learning not just that Mars had a “habitable” period but also determining how that period came to an end and how Mars became the world we observe today. Why is this evolution so important? It will help us better constrain the current possibilities for life.

As Curiosity began to climb Mount Sharp, we knew Mars had the right mix of elements, and we knew that Mars once supported favorable conditions for life’s earliest stages—but for how long? The CheMin instrument had done some in-depth analysis of rocks, allowing the scientific team to notice that the abundant clay found at the base of the mountain was waning and jarosite was becoming the most abundant material. Jarosite is often associated with its formation in acidic water, so its presence records a long and water-rich (but acidic) period. Acid is often thought to be harmful, but life on Earth has found many ways to tolerate remarkably acidic environments on our planet. John Grotzinger from Caltech specified that these conditions were not even so severe that we had to imagine “extreme resistances” to survive them and that they would make for a fine “primordial soup”! According to Grotzinger, the conditions never strayed too far from habitable while these rocks were forming.

Higher up the peak, the rover has found more clays and iron-rich materials (similar to the smooth bottom layers) but observed iron of a different type. At the bottom of the hill, the iron-rich material was magnetite, but as elevation increases, hematite becomes more common. Since the key difference in the atomic structure of these minerals involves oxygen, they tell a story of decreasing environmental oxygen levels over time.

Lastly, some silica-rich rock were pegged as perfect targets for future human missions or a sample return to Earth. This type of rock is the best at preserving fossils here on Earth, so a competent pair of hands searching these rocks might be able to find fossilized martian life from way back when!

Curiosity still has a fair distance to travel and her prognosis is good. While she is experiencing some drill issues (blamed on a faulty brake in the drill itself), some of the issues the staff was most worried about have been solved. Once upon a time, we were very worried about Curiosity’s wheels as she crossed the jagged rocks below, but today, given safer driving methods, all wheels still have 60 percent of their predicted lifetime remaining. As the team works on getting the drill back online, we can take some time to reflect on all the awesome things Curiosity has found and how much more there is to discover as she climbs! –Josh Roberts

Someday, the red supergiant Betelgeuse—the bright star that marks the right shoulder of the constellation Orion—will explode as a supernova, but no one knows when. “It might be ten thousand years from now, or it might be tomorrow night,” says J. Craig Wheeler, of the University of Texas. While the star’s future remains unknown, astronomers are trying to solve a mystery surrounding Betelgeuse’s past. Namely, the reason behind the red supergiant’s speedy rotation. “We cannot account for the rotation of Betelgeuse,” Wheeler explains. “It’s spinning 150 times faster than any plausible single star just rotating and doing its thing.”

When a star inflates to become a supergiant, its rotation should slow down. “It’s like the classic spinning ice skater—not bringing her arms in, but opening her arms up,” Wheeler continues. As the skater opens her arms, she slows down. So, too, should Betelgeuse’s rotation have slowed as the star expanded.

So why did it speed up instead of slowing down? Wheeler had a theory. “Suppose Betelgeuse had a companion when it was first born? And let’s just suppose it is orbiting around Betelgeuse at an orbit about the size that Betelgeuse is now. And then Betelgeuse turns into a red supergiant and absorbs it—swallows it.” He explains that the companion star, once swallowed, would transfer the angular momentum of its orbit to Betelgeuse, speeding the rotation of Betelgeuse’s outer layers. Wheeler estimates that the companion star would have had about the same mass as the Sun, in order to account for Betelgeuse’s current spin rate of 15 kilometers (nine miles) per second at its surface.

While computer simulations suggest this is a very likely possibility, Wheeler and colleagues also needed physical evidence of such an event—if Betelgeuse did swallow a companion star, it’s likely that the interaction between the two would cause the supergiant to shoot some matter out into space. Studying previous literature, Wheeler found infrared images taken of Betelgeuse in 2012 by Leen Decin of the University of Leuven with the orbiting Herschel Space Observatory. The images show two shells of interacting matter on one side of Betelgeuse, just a bit closer than where Wheeler expected the interaction matter to reside. Various interpretations exist; some say that this matter is a bow shock created as Betelgeuse’s atmosphere pushes through the interstellar medium as it races through the galaxy. But “the fact is,” Wheeler says, “there is evidence that Betelgeuse had some kind of commotion on roughly this timescale” (that is, 100,000 years ago when the star expanded into a red supergiant).

The team suggests that the swallowed companion theory could explain both Betelgeuse’s rapid rotation and this nearby matter. Their findings were published recently in Monthly Notices of the Royal Astronomical Society. –Molly Michelson