“Remember—you must do the thing you think you cannot do,” said Judith Enck of the U.S. Environmental Protection Agency earlier this month, quoting Eleanor Roosevelt to a packed audience at the inaugural Aquarium Plastic Pollution Symposium in Monterey, California.

Enck’s reminder was apt, as speaker after speaker outlined the boggling enormity of plastics pollution.

About eight million metric tons of plastic enters the ocean each year according to a recent study, equal to five grocery bags of plastic trash per square foot of the world’s coastline. And production of plastics will likely double over the next few decades, possibly quadrupling by 2050.

A Goliath to confront, indeed.

The symposium, hosted December 5-7 at the Monterey Bay Aquarium, sought to identify ways aquariums can work together to quell the plastics flow into waterways. Nearly 40 speakers and an audience of museum leaders, scientists, and policy experts shared case studies and ideas—from education programs to policy campaigns—that engage the public in limiting single-use plastics.

Symposium attendees, including representatives from California Academy of Sciences’ Steinhart Aquarium, also brainstormed strategies for a national anti-plastics PR campaign. In 2017, participating aquariums in the Aquarium Conservation Partnership will test messaging to decrease consumer use of plastics, within their facilities and in their home cities.

Influencing the public’s perception of plastics remains an imperfect science with divergent theories of change. But symposium speakers expressed consensus on the need to construct messages with emotional resonance and specific, achievable outcomes. Below are six lessons on explaining the plastics problem and inspiring action.

Word choice matters in reaching people, in helping them understand the problem and in motivating action.

Doug Woodring, co-founder of the Ocean Recovery Alliance, spoke about the benefit of using the singular “ocean” versus the plural “oceans” in messaging. Using the singular is more effective, he argued, because it frames the ocean as a body of water for which we are all collectively responsible. People are more likely to engage if they feel they have a stake in the outcome.

Similarly, marine plastics “pollution” is better than referring to it as “debris.” “Debris is a mind-numbing word. Plastic is pollution—litter,” Woodring said.

Marcus Eriksen, founder of the Five Gyres Institute, uses the term “plastic smog” to describe the problem. Using “smog” as a metaphor more readily conjures the reality of trillions of microplastics embedded in water bodies, rather than large floating pieces as one might intuitively imagine. “Smog—the public understands this,” he said.

2. Know Your Audience, Meet Them Where They Are

Ocean health is a second-tier issue for much of the public, including the rising millennial generation, according to research presented by Lisa Dropkin, principal at Edge Research. Most people rate economic and human rights issues as the most pressing societal problems.

But for those millennials concerned with the environment, Dropkin said this instinct was usually developed from experiences as tweens, emphasizing the need for exposure to nature early in life. The fact that nearly half (46 percent) of respondents in Dropkin’s study rated the state of ocean health as “good” suggests the need for further education on the extent of plastics pollution; the severity of the crisis hasn’t reached the majority of people.

The good news is that aquariums and zoos are some of the most trusted institutions on environmental issues by millennials, just behind “edutainment” companies such as National Geographic, and equal to the trust they place in the opinions of friends and family.

Dropkin suggested that to motivate action, messaging must focus on a “rallying cry” that identifies a controllable problem. And to appeal to millennials specifically, it should be edgy and snarky, emphasize social involvement through competition, and clearly explain how their action has impact.

The impact of plastics pollution on marine wildlife sparks a strong and emotional reaction, according to several speakers.

Curt Below of Fairbank, Masline, Maullin, Metz & Associates presented data on a study his firm conducted on public attitudes towards plastics pollution in 2013. By far the most convincing messages to the 801 participants included the impact of plastics on wildlife, followed by suggestions of alternative products to use. Participants were less convinced by messages discussing Earth’s beauty at stake and the potential for government savings.

Even Andrew Day of the Vancouver Aquarium’s Coastal Research Institute, a self-described “research guy,” acknowledged the importance of reaching people on an emotional level. “Sometimes you need to show a seal choking, he said. “We don’t need more studies and facts.”

With the global plastics market expected to continue its rapid growth, engaging individual consumers is only part of the battle. Several of the symposium speakers discussed their work with businesses and corporations to stem disposable plastics consumption.

Chris Slafter of California Clean Water Action’s “Rethink Disposable” campaign discussed how he helps businesses understand how decreasing single-use plastics makes economic sense. For example, his organization’s work with JS Stewhouse, a small restaurant in Cupertino, saved the business $7,515 in costs and reduced over 1,300 kilograms (2,800 pounds) of waste in a single year. In 2016, Rethink Disposable’s small business clients eliminated an average of 120,191 packaging items and saved over $6,000. All this came from removing or replacing their single-use products available for customers.

George Leonard, Chief Scientist at The Ocean Conservancy, emphasized the importance of engaging strategically with businesses, given the environmental community’s reputation as hostile to their interests. He advised the audience not to approach businesses with a reprimanding tone. Instead of beginning with “you need to change,” start by sharing information about the problem and inviting them to contribute, he said.

Similarly, Slafter described Rethink Disposable’s approach of open listening and exchange. First, he asks restaurant owners to describe their ideal restaurant. Then, he offers strategies to help meet those goals through reduction of disposables.

Convincing businesses to adopt an environmental practice often first requires demonstrating public support for it. Several speakers mentioned the Monterey Bay Aquarium’s successful Seafood Watch program, which grew from a consumer guide on sustainable seafood choices to one used by 200 partners including major entities like Whole Foods, Aramark Corporation, and Compass Group. Before these companies bought in, they needed to know it was relevant to a critical mass of consumers.

Aquariums can help cultivate and demonstrate the relevance of environmental issues to the public. Several speakers shared the journey to “walking the talk” with plastic products in their aquariums.

Eric Loyall of Service Systems Associates, a provider of dining and retail services for 56 attractions nationwide, described the transition of one of its largest accounts, the Houston Zoo, to rid its stores of plastic bags. The zoo eliminated them (22,000 annually) with relative ease—they earned positive PR and turned a previous cost into a revenue stream by selling reusable bags.

But small steps in retail choices can make a difference. Aquariums can begin by encouraging “bring your own container” cultures, offering disposables by request only, and by starting conversations with vendors, one by one.

David Rosenberg of the Monterey Bay Aquarium shared how he worked with their local vendor, Russo’s Produce, to replace produce deliveries from disposable bins to reusable baskets. This small act gave the aquarium a story to share with their guests and the public, and gave them credibility and momentum in pursuing other sustainability projects.

“Let’s remember, we are beacons of hope in a sea of challenge,” said John Houck of the Point Defiance Zoo & Aquarium in Tacoma, Washington. Point Defiance recently made the uncompromising step to ban all single-use plastics in its café. Water refill stations are available around the building emblazoned with the text, “Save Sea Turtles Here.”

This work is about preserving Earth for his grandkids, Houck said. We must get personal about our reasons for resisting things like disposable plastics, or we can easily lose focus. If aquariums think solely about revenue impacts, we easily risk moving “from no margin to no mission, from no mission to no ocean, and from no ocean to no planet,” he said.

Instead, Houck urged the audience to go “wider, deeper, further” on behalf of future generations.

Appealing to personal values can make your institution a more effective messenger, according to Albert George, Director of Conservation at the South Carolina Aquarium. “If they see you as the caretakers of nature… as the ambassadors for what really matters, you have more power than you can imagine,” he said.

George described the ardent support for a plastic bag ban from constituents in Folly Beach, South Carolina, “in a red state, in a place that’s known for peculiarities.” Regardless of political leanings, people love nature in South Carolina, George explained. And his aquarium’s Sea Turtle Hospital helped expose the danger of plastic bags through their impacts on a universally beloved animal. If you can connect with people’s emotion in this way, “you can get people to move mountains,” he said.

Doug McCauley, Director of the Benioff Ocean Initiative at the University of California at Santa Barbara, underscored the importance of tapping into our own emotional story. Personally, his concern about plastics arises from his love for the natural world.

“I’m a scientist because I love being in the ocean,” he said. “I love reefs because they are beautiful and surprising… What’s the point of doing the science if they’re not going to be here in 100 years?”

Without connecting to our personal narratives for sustaining the environment, we likely won’t be effective in convincing others to help, he suggested. 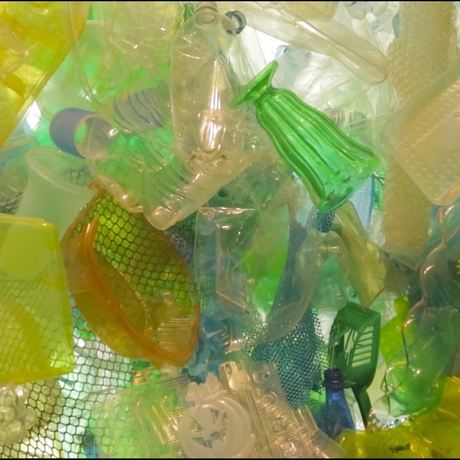 The Source of Plastic Pollution

With plastic pollution ending up in our ocean, we all need to be part of the solution by using it less. 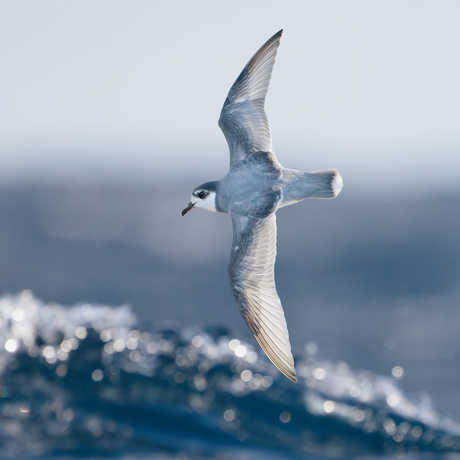 The Terrible Scent of Ocean Plastics

Seabirds and other marine life mistakenly find plastic in the ocean smells like food.