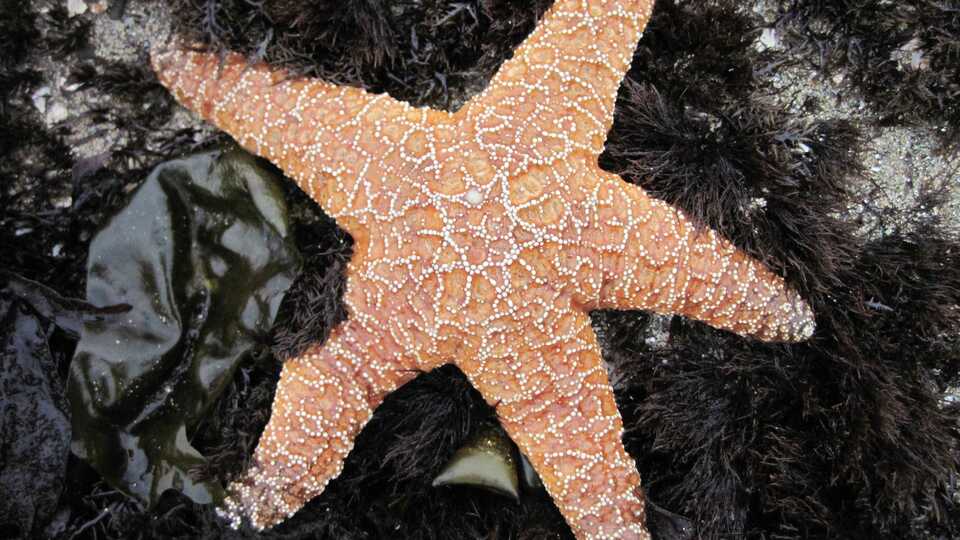 About a year ago, we reported on the massive starfish die-off along the west coast. Was this so-called wasting disease caused by a bacteria or virus? How would it affect the ecosystems where these starfish live? In our video, Academy researcher and citizen science coordinator Rebecca Johnson asks these questions and this week, researchers determined the answer to the first one. The die-off is caused by a virus, according to a paper in the Proceedings of the National Academy of Sciences.

Through DNA sequencing, the authors of the new study determined the cause is a densovirus. “Densovirus refers to a group (subfamily) of single-stranded DNA viruses in the family Parvoviridae,” says Academy microbiologist Shannon Bennett. “Members of the group have been reported in several insects, crustaceans, and echinoderms such as sea urchins.” And unlike another virus in the news right now, this deadly starfish virus is transmitted very easily. “This paper’s findings show that direct contact between infected animals is not required for transmission,” Bennett says. “Infected animals shed the virus into the water column and it can persist in the environment, in the water, in sediment or on floating particulate matter, for example. Susceptible animals are then infected by viruses in their environment.”

According to the lead author of the paper, Ian Hewson of Cornell University, the virus wasn’t so easy to spot. “There are 10 million viruses in a drop of seawater, so discovering the virus associated with a marine disease can be like looking for a needle in a haystack,” he says.

Bennett is impressed with their methods to find that needle. “They used a clever technique to narrow the search to specimens that had disease (rather than sorting through environmental samples). They used tissue from diseased animals—filtered to remove everything bigger than viruses—to expose healthy animals held in dedicated clean aquaria. When disease developed, they used unbiased sequencing techniques on filtered tissues to examine the virus genes present, and electron microscopy on those tissues to look for virus bodies. They used the genetic information to then design a targeted screen for the specific virus, to determine its abundance and spread in nature, across geographic space, back through time, and in different species.”

The “back through time” part Bennett mentions requires looking at museum collections. And through these collections that span decades, the scientists discovered that the virus isn’t new to starfish species. So why is it causing problems now? “This is indeed a puzzle,” Bennett says. “New research is showing that some viruses may be present at low levels in their hosts but not cause disease until there is stress on the system. The authors suggest that some kind of environmental change may have occurred that has either increased animal susceptibility or enhanced transmission of the virus. They show that virus levels are increased in proportion to disease progression as well as in proportion to host size, and is more common in adults than juveniles. Based on these findings, they offer up the hypothesis that increases in the abundance of large adult sea stars in many bays and inlets have contributed to the current outbreak conditions. They also suggest that the densoviruses associated with the disease outbreak may have undergone genetic changes—evolved—from the viruses in the past, allowing them to more efficiently infect more types of hosts.”

The identification of the cause of the disease is just one step to help stop it from wreaking more havoc, Bennett says. “Consideration of how changes in environment, host ecology, and virus evolution contribute to the emergence of this disease could definitely help mitigate this particular disease and future such events!”

And saving the starfish could be essential in saving the ecosystems they inhabit. “Most starfish along our coast are predators, they eat other animals,” says Johnson. “One in particular, Pisaster ochraceus (the ochre star) eats mussels, snails, barnacles and other invertebrate animals that don't move or don't move too fast. Pisaster ochraceus is known as a keystone species: a species that has a larger effect on the community in which it lives than you would expect based on its numbers alone. Some pioneering work by Robert Paine and many others in the late 1960s and early 1970s found that if you remove starfish from mussel beds where they are found, the mussels greatly increase in number and the diversity of others animals decreases. They concluded that the starfish keep (or maintain) the mussel bed community size, extent and diversity by eating the mussels, so they don't dominate the area.”

There is some good news—Johnson, fellow citizen science coordinator Alison Young and their team of amateur scientists are starting to see a few more starfish off our coast. “We have been seeing more adults and many, many juvenile starfish,” Johnson says. “The young are most likely not the babies of those affected by the wasting, but are either survivors or were plankton during the worst of the wasting.”

Academy senior biologist Nick Yim, who takes care of the local marine animals that live in the Steinhart Aquarium, reports the same. “Last week we went diving in Monterey at Breakwater,” he says. “There we observed a ton of adult bat stars (Asterina miniata). Two weeks ago we went tidepooling at Pillar Point and saw a lot of pink and leather stars (Pisaster brevispinus and Dermasterias imbricata) and a few ochre and bat stars.” And that’s a remarkable difference, he says. “The last few tidepooling trips over the past year we had not seen many sea stars at all. The last time I went diving was almost a year ago, but down off the coast of Big Sur. There we saw many giant spined stars (Pisaster giganteus) with clear wasting disease symptoms.”

Both Johnson and Yim have plans in the next few weeks to revisit local areas looking for the starfish. And you can get out there and make observations, too. Johnson has set up a project on iNaturalist for reports of any starfish seen on our coast that you can access here. And she points to an organization called PISCO that is looking for citizen science starfish observations here (with a map of the disease available here).

We can all do our part to help save these important animals!

P.S. Are you curious about the use of “starfish” versus “sea star”? Johnson points to this blog post on the issue.