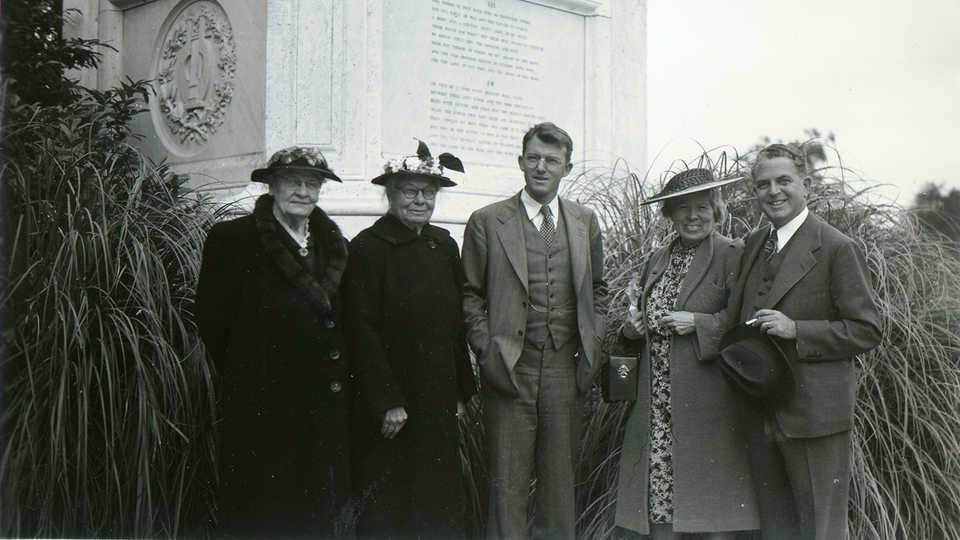 Today the Academy hosts its first Women in Science Summit. The event, featuring a lineup of accomplished scientists—Sylvia Earle, Jane Goodall, Dawn Wright, and the Academy’s Meg Lowman among them—will explore many of the current issues and challenges surrounding women working in STEM (Science, Technology, Engineering, and Math) fields and how, in the future, scientific institutions can work to increase diversity and create a supportive network for women beginning their careers.

But let’s rewind 163 years. In 1853, the California Academy of Sciences became the first scientific institution in the western United States. That same year—which, by the way, was 58 years before California granted women the right to vote and 67 years before the 19th Amendment was ratified—the founders of the Academy made a resolution, that they would “highly approve the aid of females in every department of natural science and that we earnestly invite their cooperation.” This was a significant departure from their east coast counterparts—the Academy is one of the earliest known scientific organizations in the United States to collaborate with, hire, and pay women curators. This progressive policy was perhaps born of the relative lawlessness of the west; after all, California had become a state only three years prior.

Of course, in the late 19th century, there wasn’t a line of women with PhDs at the door looking for jobs. Many of the Academy’s earliest female contributors had married and raised families before they could devote any significant amount of time to scientific study. The Academy’s first paid female curator, hired in the 1880s, was Katharine Brandegee, a physician. She enrolled in college only after her first husband passed away, and although she was a medical student, she honed her skills as a botanist while traveling and collecting plants across California, Nevada, and Baja California. (She later remarried a fellow botanist, and they spent their honeymoon walking from San Diego to San Francisco, collecting specimens along the way.)

Brandegee met Alice Eastwood when she traveled to Denver to inspect Eastwood’s collections. Eastwood was also self-taught, using published guides to study botany during the decade she spent teaching at her former high school, and collecting specimens whenever she went on vacation. Brandegee, clearly impressed, gave up her salary at the Academy in order to hire Eastwood to help her with the Academy’s herbarium. When Brandegee retired (instead continuing her botanical studies in San Diego), Eastwood took over as Curator of Botany and head of the department, a position she held until retiring in 1950 at age 90. Perhaps the most well-known story about Eastwood involves a heroic deed: after the 1906 earthquake, Eastwood saved nearly 1,500 type specimens and key archival materials from the Academy before the ensuing fire took over the city and destroyed the majority of the collections.

Eastwood’s influence is also strongly felt outside the collections, in the opportunities she provided for other women in the field of botany. Ynes Mexia and Lester Rowntree were amateur botanists (obviously a theme here) who became significant contributors to the Academy’s collections. Mexia enrolled in botany classes at UC Berkeley at age 51 (after two marriages, having already raised a family) where she met Eastwood, who accompanied her on several of her California collecting trips. She traveled extensively throughout the Amazon, Alaska, and Mexico (where she once abandoned a group to travel alone, believing it best fit her collecting style). During her life, she collected over 150,000 specimens, of which 500 were new species. A large collection of her photographs and slides are held by the Academy Library.

Lester Rowntree was also in her fifties, and divorced, when she found her true calling. Although she was already quite an avid gardener, “not until after my domestic happiness had gone to smash,” she wrote, “did I realize that I was free to trek up and down the long state of California.” She lived in a van during the summer, driving across the state collecting specimens and wildflower seeds, and started a seed company, Rowntree & Co. During the winter, she lived in Carmel, where her hillside garden, full of native California species, was world-famous. Rowntree also found time to write hundreds of articles, several children’s books, three books on California plants (two of which were published), and to co-found the California Horticultural Society with Eastwood. Her notes, correspondences, photos, and manuscripts are stored in the Academy’s Rowntree Collection.

Alice Eastwood’s rescue of the Academy’s specimens is legendary, but in 1942, then Academy director Robert C. Miller made the following remarks in honor of another one of her significant rescues: "It was justice in the most poetic sense that more than a half a century after the Academy had voted to admit women to its activities, the book of minutes containing the record of that action, along with other documents and specimens of inestimable value, should have been saved through the energy and resourcefulness of a woman curator."

"It took adversity to bring me the sort of life I had always longed for. Not until after my domestic happiness had gone to smash did I realize that I was free to trek up and down the long state of California, to satisfy my insistent curiosity about plants, to find them in their homes meeting their days and seasons, to write down their tricks and manners in my notebook, to photograph their flowers, to collect their seeds, to bring home seedlings in cans just emptied of tomato juice."—Lester Rowntree, botanist, writer, horticulturalist