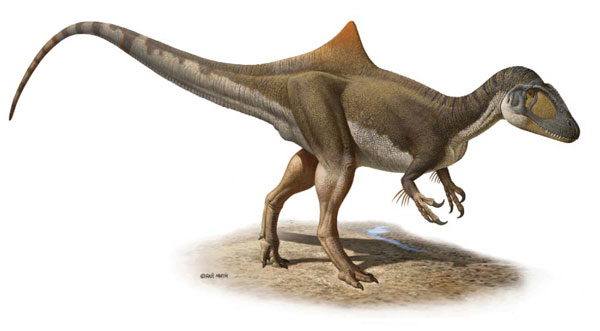 The latest dinosaur sweeping the science blogosphere? The hump-backed Concavenator. Yeah, I thought the name was a joke, too, until I read the articles.

According to an article published this week in the journal Nature, Concaveator corcovatus was a shark-toothed predator and, per a supporting article,

… about 4 metres long [13 feet] from nose to tail and lived during the Early Cretaceous period, about 130 million years ago.

Its name literally means “the hunchback hunter from Cuenca,” describing both the location where it was found in central Spain and one of its most unique features. Again, from Nature:

Its eleventh and twelfth vertebrae jut about twice as far from the animal's body as the rest. Unlike dinosaurs such as Spinosaurus, which had continuous fins or sails on their backs, Corcovenator seems to have had more of a short crest.

Researchers remain uncertain about the reason for this humpbackedness—perhaps it provided a showy display, stored energy or kept the creature cool. As Ed Yong says in his “Not Exactly Rocket Science” blog for Discover,

… sometimes, these [dinosaur] body parts are so bizarre that their purpose is a mystery.

Even though Concavenator’s humpback is super cool, that’s not the reason its discovery has received so much attention. Because the fossil was so well preserved, another exciting trait came to light. From ScienceNews:

Concavenator also has bumps on its forearm bones that look a lot like quill knobs seen on the wing bones of modern birds. Quill knobs are attachment points in the bone for ligaments that support a bird’s flight feathers. This could mean that Concavenator had featherlike structures on its arms.

If other researchers can confirm this finding, it would push back the existence of feathered dinosaurs to much earlier than previously thought.

No wonder all the fuss, funny name or not.

(Some great images of the fossils can be found here.)