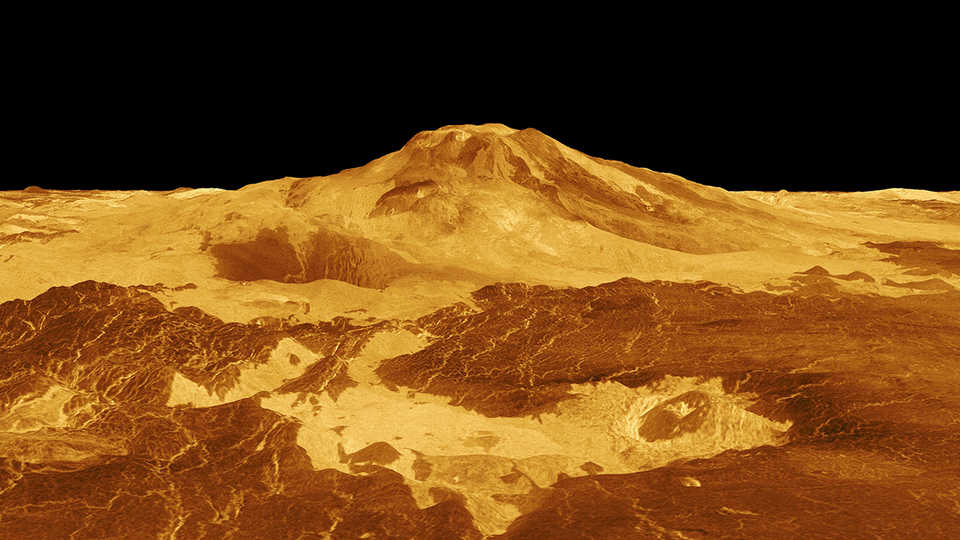 For decades, astronomers here on Earth have studied volcanoes on neighboring Venus. But the volcanoes’ activity appeared to be a thing of the past—perhaps something that occurred on the sweltering planet thousands, millions, or even billions of years ago.

But a recent publication in Geophysical Research Letters provides strong evidence that Venus is volcanically active now. In combing through data from the European Space Agency’s Venus Express mission, the scientists found transient spikes in temperature at several spots on the planet’s surface. The hotspots, which were found to flash and fade over the course of just a few days, appear to be generated by active flows of lava on the surface.

The spots were clustered in a large rift zone called Ganiki Chasma. “We knew that Ganiki Chasma was the result of volcanism that had occurred fairly recently in geological terms, but we didn’t know if it formed yesterday or was a billion years old,” says James W. Head, of Brown University. “The active anomalies detected by Venus Express fall exactly where we had mapped these relatively young deposits and suggest ongoing activity.”

The latest finding is consistent with other data from Venus Express that have hinted at very recent volcanic activity. In fact, a few years ago, scientists reported transient spikes in sulfur dioxide in the upper atmosphere of Venus, another potential signal of active volcanism.

“This discovery fits nicely with the emerging picture of very recent activity in Venus’s geologic history,” Head says. “These remarkable findings were the result of collaborations spanning many years and many political borders. They underscore the importance of international collaboration in exploring our solar system and understanding how it evolves.” –Molly Michelson

Philae Phoned, But Still Not Yet Phound

It’s alive! European Space Agency (ESA) officials were thrilled on June 13 when contact was made with the little Philae lander somewhere on the surface of Comet 67P/Churyumov-Gerasimenko. Some had presumed it lost after its awkward landing on the comet’s surface in November, but others (correctly) held that it was simply in hibernation in the shadow of a cliff, where its solar panels could not receive enough sunlight to charge its battery. The hope was that it would re-awaken when the comet got closer to the Sun, changing the angle of illumination and allowing sunlight to shine onto the slumbering spacecraft.

After a seven-month nap, the lander finally phoned home in an 85-second burst relayed by the Rosetta mothership, followed by a second, weaker signal the next day. Contact with Philae confirms it apparently wasn’t too badly damaged by a bumpy landing that resulted in the craft laying on its side. But this doesn’t mean that Philae is out of the woods just yet. Its battery is designed to recharge only in temperatures above 0°C (32°F). In the frigid –100°C (–148°F) temperature on the comet’s surface, it can rely only on the power its solar panels generate during direct exposure to sunlight as afforded by the comet’s 9-12 hour rotation. This limits the length of time that instruments can operate and the length of opportunities for communication, depending on where Rosetta is with respect to Philae’s location.

The brief communication received on June 13 included some data about the comet that had been collected and stored during the 57 hours of power provided by its non-rechargeable battery right after landing. After that power was exhausted, a second, rechargeable battery was supposed to take over, but the lack of sufficient sunlight at the lander’s final resting place prevented that, forcing the craft into a “safe mode.” In November, on-board instruments measured temperatures lower than –160°C (–256°F) on the surface. To wake Philae up, the battery had to generate at least 5 watts of power just to warm instruments to –45°C (–49°F) and reboot the computer. Then, a bit more power—19 watts—was needed to enable communication with Rosetta. This means that Philae was probably operating for some period of time—some controllers believe a day or two—as power levels gradually increased until the “I’m okay” signal could be sent.

Two more communications from Philae, on June 14 and June 19, have triggered increased optimism on ESA’s part. “We are very happy to have received signals from the lander again, and we are all working hard towards establishing a robust link between Rosetta and Philae,” said Patrick Martin, Rosetta mission manager.

This news comes only a day after ESA reported that the Rosetta spacecraft, still orbiting the comet, might have spotted glints of sunlight from the shiny, metallic surface of the lander. Only a few pixels wide, the image was too indistinct for a positive identification, but a before-and-after comparison shows a bright spot on December 12 where one had not been seen on October 22. With dust and rubble being spewed from the comet as it approaches the Sun, controllers have deemed present conditions too hazardous to steer Rosetta closer for another high-resolution peek, so they’ll have to wait until after perihelion (closest approach to the Sun) in August for such an attempt. On the other hand, now that communication has at least been tentatively re-established, controllers are planning to lower Rosetta’s orbit slightly in hopes of optimizing contact with the plucky, little Lander That Could and finally triangulate on its exact location. –Bing Quock

For the first time, astronomers have measured both the mass and size of an exoplanet smaller than Earth.

Kepler-138b is less than one-tenth Earth’s mass and about half Earth’s diameter, making it roughly comparable to Mars. It is one of three confirmed planets around its red dwarf star in the constellation Lyra, about 200 light years away.

Different methods used to detect exoplanets reveal different planetary attributes. Kepler-138b and its sibling planets were detected by the Kepler mission using the transit method, which gave astronomers the diameter and orbital period of the world by measuring the dip in the brightness from the parent star as the planet moves in front of (or “transits”) it. Typically, to determine a planet’s mass, astronomers measure the minuscule movement of the star caused by the gravitational pull of an orbiting planet. Understandably, the tug of a smaller, Earth-sized world is extraordinarily hard to detect compared to that of a far more massive, Jupiter-sized world.

However, a team of astronomers from Penn State University, NASA Ames, the SETI Institute, and the University of Chicago developed a new way to determine a planet’s mass in the case of multiple planets orbiting very close to their star.

“Each planet periodically slows down and accelerates ever so slightly from the gravity of its neighboring planets. The slight change in time between transits allows us to measure the masses of the planets,” said Daniel Jontof-Hutter of Pennsylvania State University’s Center for Exoplanets and Habitable Worlds.

Having both the size and mass of a world allows astronomers to calculate the planet’s density, which gives clues to at least its bulk composition (rocky, watery, gaseous, etc.). Kepler-138b is estimated to have a density of about 2.6 grams per cubic centimeter, making it much less dense than Earth, but still potentially a rocky world. The other two planets in the system, Kepler-138c and Kepler-138d, are approximately Earth-sized, and the team also measured their masses. Kepler-138c is likely to be rocky, but Kepler-138d is far less dense and probably cannot be composed of Earth-like materials.

“The substantial difference between the densities of the two larger planets tells us that not all planets similar to Earth in size are rocky,” said Jack Lissauer, co-author and planetary scientist at NASA’s Ames Research Center. “Further study of small planets will help provide more understanding of the diversity that exists in nature, and will help determine if rocky planets like Earth are common or rare.”

The findings were published in Nature this week. –Elise Ricard

Maat Mons is displayed in this computer generated three-dimensional perspective of the surface of Venus.