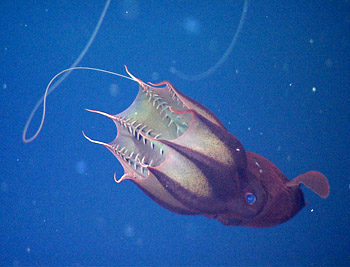 There’s a small creature that lives in great depths of the ocean with the most terrifying name—Vampyroteuthis infernalis, which literally means vampire squid from hell.

But this mysterious creature really gets a bad rap. First of all, it’s not a squid, and now, new research proves that it’s also not a vampire.

In reality, the vampire squid is a soft-bodied and passive creature, about the size, shape and color of a football. (Might even fool one of the NFL’s replacement refs.) A relict, or living fossil, it inhabits the deep waters of all the world's ocean basins at depths where there is almost no oxygen, but also relatively few predators.

Little was known about what these cephalopods eat at these depths until Monterey Bay Aquarium Research Institute (MBARI) researchers Henk-Jan Hoving and Bruce Robison took the time (a lot of time!) to find out.

Hoving looked carefully at 23 hours of footage taken by MBARI remotely operated vehicles (ROVs) of vampire squids filmed over the past 25 years. He and Robison also used the ROVs to collect live vampire squids and study their feeding habits in the laboratory.

The scientists discovered that vampire squids use two long filaments that extend from their bodies to capture “marine snow” that drifts at these depths. As pure as marine snow may sound, it’s anything but. In reality, it includes animal feces, corpses and snot that sinks down from above. Yum!

Hoving saw the sea creatures slowly pulling in their filaments and scraping off the accumulated marine snow using their arms. Other vampire squids had globs of marine snow and mucus dangling from their mouths. Under the microscope the researchers observed that mucus-producing cells cover the vampire squid's suckers, which the animal apparently uses to collect and glue together individual particles of marine snow. Even more yum!

Beyond the disgustingness of their diet, it’s not very nutritious. But vampire squids have an extremely energy-efficient lifestyle and unique adaptations. Their bodies are neutrally buoyant, so they don't have to expend energy to stay at a particular depth. Even better, they don't have to swim to find food, but simply extend their filaments to collect food that drifts past them.

You can see video of this amazing creature at Wired.