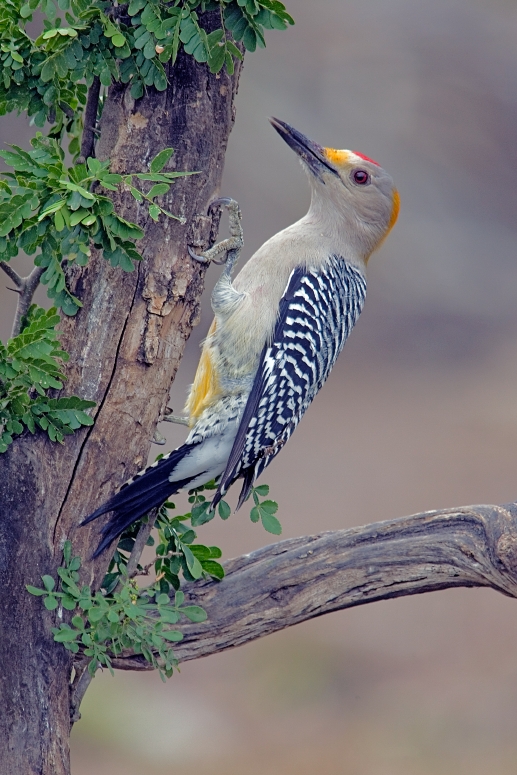 There’s been much in the news about football player concussions, but why don’t you ever read about woodpecker concussions?

According to an article in New Scientist last week, “Humans are often left concussed if they experience 80 to 100g,” but woodpeckers experience over ten times that each time their beaks hit wood. A recent paper in Bioinspiration & Biomimetics states:

A woodpecker is known to drum the hard woody surface of a tree at a rate of 18 to 22 times per second with a deceleration of 1200 g, yet with no sign of blackout or brain damage.

How is that possible? Two researchers at UC Berkeley decided to find out. Studying the birds’ head and neck with videos and CT scans, they discovered that gold-fronted woodpeckers are able to absorb the blows four different ways—through the beak, hyoid, spongy bone and skull bone. New Scientist breaks the features down further:

These are its hard-but-elastic beak; a sinewy, springy tongue-supporting structure that extends behind the skull called the hyoid; an area of spongy bone in its skull; and the way the skull and cerebrospinal fluid interact to suppress vibration.

Once the researchers detailed the mechanics of the woodpecker’s shock-absorbing head and neck, they really went to work and designed a system to protect microelectronics the same way the bird’s brain is protected. They created a metal cylinder to hold the electronics and absorb shock.

Then came the fun part. To test their woodpecker-inspired system, the scientists shot the cylinder out of an air-gun, “to explore the g-force tolerance… in high-g environment of up to 60,000 g,” according to their paper. And it worked! The electronics were safe.

Now what? The real-world applications are endless, says New Scientist: