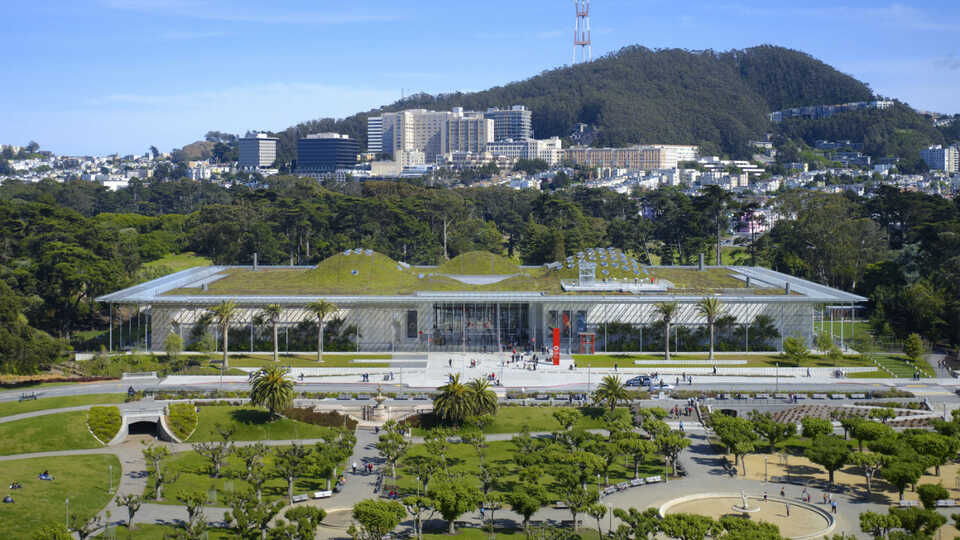 SAN FRANCISCO (October 6, 2017) — The California Academy of Sciences is pleased to announce that 16 new members have joined the ranks of the Academy Fellows, a governing group of more than 400 distinguished scientists who have made notable contributions to one or more of the natural sciences. Nominated by their colleagues and selected by the Board of Trustees, the Academy Fellows remain members of the Fellowship for life. The new members will be inducted during the Fellowship's next meeting on October 10, 2017. They will join such well-known Academy Fellows as Sylvia Earle, Paul Ehrlich, John Holdren, Peter Raven, John McCosker, and Jill Tarter.

During the meeting, the Fellowship will also present one of its members with the Academy’s highest honor: the Fellows Medal. This honor is given to especially prominent scientists who have made outstanding contributions to their specific scientific fields. Medalists are nominated each year by the Academy Fellows and confirmed by the Board of Trustees. This year's Medal will be awarded to Geerat J. Vermeij, renowned evolutionary biologist and paleontologist—and Distinguished Professor of Earth and Planetary Science at the University of California, Davis—for his pioneering research career and contributions to the Academy.

Brief biographies for the Fellows Medalist as well as each of the new Fellows are included below.

Recipient of the 2017 Fellows’ Medal

Geerat J. Vermeij
Distinguished Professor of Earth and Planetary Science, University of California, Davis
Dr. Vermeij, originally from the Netherlands, is a professor of paleobiology at the University of California, Davis. Blind from the age of three, he graduated from Princeton University and received his PhD in biology from Yale University. An evolutionary biologist and paleontologist, Vermeij studies fossil and living molluscs, having published more than 250 papers on topics ranging from taxonomy to functional morphology and extinction to economics and evolution. He is the author of several books and the recipient of a MacArthur Fellowship, the Daniel Giraud Elliot Medal from the National Academy of Sciences, and the Paleontological Society Medal. Vermeij was a member of the Board of Trustees at the California Academy of Sciences from 2006 to 2015.

Ring Cardé
Distinguished Professor & Alfred M. Boyce Chair in Entomology, University of California, Riverside
Dr. Cardé is Distinguished Professor and the Boyce Chair of Entomology at the University of California, Riverside. He was previously a distinguished professor at the University of Massachusetts. Cardé started his academic career at Michigan State University, following a postdoctoral position with Wendell Roelofs at the New York State Agricultural Experiment Station. He received a bachelor’s degree in biology from Tufts University and graduate degrees in entomology from Cornell University. Cardé’s research investigates how insects navigate to odor sources—he has published over 250 scientific papers and edited eight books. In 2009 he was awarded the International Society of Chemical Ecology’s Silver Medal.

Nona Chiariello
Staff Scientist, Jasper Ridge Biological Preserve, Stanford University
Dr. Chiariello is a grassland ecologist who, as Staff Scientist at Stanford University’s Jasper Ridge Biological Preserve, has emphasized the role of field stations in fostering scientific discovery, training young scientists, monitoring environmental change, and conserving biodiversity. Chiariello’s research on plant phenology, biomass allocation, and responses to multiple stresses contributed to foundational concepts in ecology. She has been a core contributor to global change research at Jasper Ridge, specializing in physiological and community responses. She holds a bachelor’s degree from Swarthmore College and earned her PhD in biology from Stanford.

Ruth DeFries
Denning Family Professor of Sustainable Development, Columbia University; Co-director, undergraduate program in Sustainable Development, Earth Institute
Dr. DeFries is a professor of ecology and sustainable development at Columbia University in New York. She uses satellite imagery and field surveys to examine how global demand for food and other resources is changing land use throughout the tropics. Her research quantifies how land use affects climate, biodiversity, and other ecosystem services as well as human development. DeFries was elected as a member of the U.S. National Academy of Sciences, received a MacArthur “genius” award, and is the recipient of many other honors. She is committed to communicating with popular audiences, most recently through her book The Big Ratchet: How Humanity Thrives in the Face of Natural Crisis.

Benjamin Halpern
Director, National Center for Ecological Analysis & Synthesis; Professor, Bren School of Environmental Science & Management
Dr. Halpern is Director of the National Center for Ecological Analysis and Synthesis (NCEAS) and a professor at the Bren School of Environmental Science and Management at the University of California, Santa Barbara, where he also serves as Director of the Center for Marine Assessment and Planning (CMAP). Halpern is also Chair of Marine Conservation at Imperial College London. He has published over 180 peer-reviewed articles and was recently named one of the World’s Most Influential Scientific Minds by Thompson-Reuters. In 2016, he was awarded the A.G Huntsman Award for Excellence in Marine Science by the Royal Society of Canada, and this year, he received the Peter Benchley Ocean Award for Excellence in Science.

Robert Leidy
Ecologist, Wetland Science and Field Program Manager, U.S. Environmental Protection Agency, San Francisco, CA
Dr. Leidy has served as the lead ecologist in the wetlands program for the U.S. Environmental Protection Agency (San Francisco) for 34 years. His scientific expertise, dedication to conservation of the American West’s wetlands and waters, and his perseverance in the enforcement of our nation’s environmental laws has resulted in the protection and restoration of tens of thousands of acres of California’s wildlands. Leidy’s graduate thesis was a landmark publication in understanding the ecology and distribution of native freshwater stream fishes in the San Francisco Estuary. Robert received his PhD under University of California, Davis Professor and Academy Fellow Peter Moyle. Dr. Leidy publishes widely, primarily on California’s native fish and wetlands.

Jane Lubchenco
University Distinguished Professor and Advisor in Marine Studies, Oregon State University
Dr. Lubchenco is a marine ecologist with expertise in the ocean, climate change, and interactions between the environment and human well-being. One of the world’s most highly cited ecologists, she has served as Under Secretary of Commerce for Oceans and Atmosphere, Administrator of the National Oceanic and Atmospheric Administration (NOAA), the first U.S. Science Envoy for the Ocean, and as a member of President Obama’s science team. Lubchenco co-founded three organizations that train scientists to engage more effectively with the public, policymakers, media, and industry: The Leopold Leadership Program, COMPASS, and Climate Central. She is passionate about scientists engaging citizens to enable vibrant communities, strong economies, and a healthy planet.

Daniel McCleese
Chief Scientist, Office of the Director, Director of Innovation Foundry, Jet Propulsion Laboratory, Caltech, Pasadena, CA
Dr. McCleese is a planetary scientist studying the weather and climate of Mars. He is the founder of Synoptic Science, a space science consulting and research company. McCleese served as Chief Scientist for NASA’s Jet Propulsion Laboratory (JPL) from 2006 to 2016, and was also Director of JPL’s Innovation Foundry. He was the Principal Investigator for the Mars Climate Sounder onboard NASA’s Mars Reconnaissance Orbiter, becoming a co-investigator in 2017. As Chief Scientist for JPL’s Mars Exploration Directorate, McCleese served as one of the principal architects for NASA’s ongoing Mars Exploration Program. He was a Fulbright Scholar at Oxford University where he received his doctorate in atmospheric physics.

Elisabeth Micheli
President & CEO, Pepperwood
Dr. Micheli completed her PhD at the University of California, Berkeley as a NASA Earth Systems Research Fellow in the Energy and Resources Group in 2000, and now focuses her research on the relationship between watershed health and biodiversity. She co-chairs the Terrestrial Biodiversity Climate Change Collaborative—a Bay Area climate adaptation research initiative—and has been recognized as a Switzer Leadership Fellow. Micheli joined Pepperwood in October of 2009 as its premiere executive director and now serves as President and CEO.

Steve Morgan
Professor, Bodega Marine Laboratory, Department of Environmental Science and Policy, Coastal Marine Science Institute, University of California, Davis
Dr. Morgan is a professor at the University of California, Davis’ Bodega Marine Laboratory. His group conducts ecological and oceanographic research on the processes regulating population dynamics and communities in coastal ecosystems, complex life cycles of species with dispersing larvae, and human impacts dictated by policy solutions. Morgan is a fellow of the American Association for the Advancement of Science, cofounder of the Larval Biology Meetings, and President and Secretariat of the Western Society of Naturalists.

Carolyn Porco
Senior Research Scientist & Director of Flight Operations, Space Science Institute; Visiting Scholar, University of California, Berkeley
Dr. Porco led the imaging science team on the Cassini mission, served as an imaging scientist for the Voyager mission, and was an associate member of the New Horizons mission. She has co-authored over 120 scientific papers and received numerous awards for her contributions to science and the public sphere. The American Astronomical Society awarded her the Carl Sagan Medal for Excellence in the Public Communication in Planetary Science, and TIME Magazine named her one of the 25 most influential people in space. Since 2015, Porco has been a visiting distinguished scholar at the University of California, Berkeley.

Diana Wall
University Distinguished Professor and Director, School of Global Environmental Sustainability​, Colorado State University
Dr. Wall is a soil ecologist, university distinguished professor, and founding director of Colorado State University’s School of Global Environmental Sustainability. Her research on soil nematodes in harsh ecosystems—from the cold, dry Antarctic to hot, dry deserts—explores how life copes with extreme environments. Wall’s extensive collaborative work focuses on how the living component of soil contributes to ecosystem processes and human well-being—and to uncover how humans impact soils from local to global scales. She is the recipient of the 2013 Tyler Prize for Environmental Achievement.

The California Academy of Sciences is a renowned scientific and educational institution dedicated to exploring, explaining and sustaining life on Earth. Based in San Francisco’s Golden Gate Park, it is home to a world-class aquarium, planetarium, and natural history museum, as well as innovative programs in scientific research and education—all under one living roof.