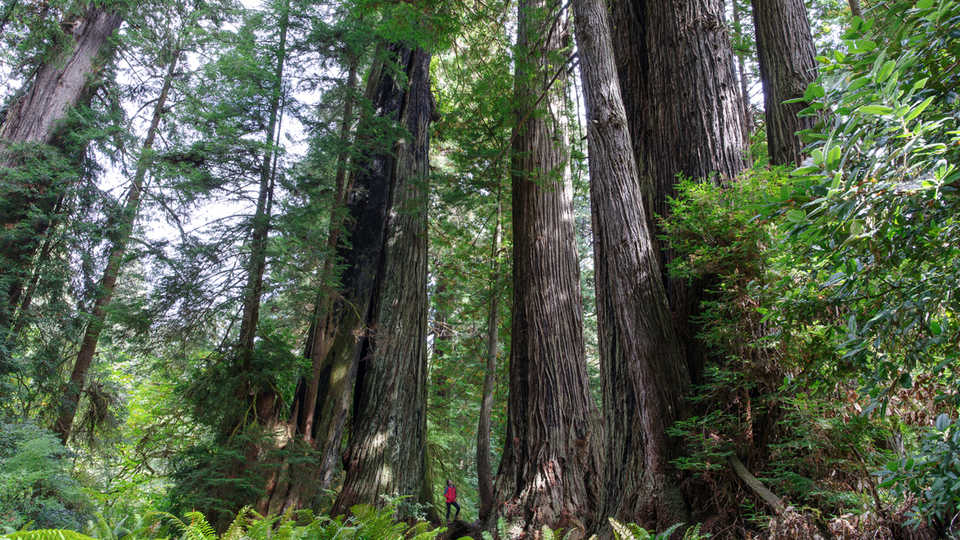 San Francisco (May 24, 2018)—Life at the edge of land and sea is a dynamic, ever-changing place—where fog rolls in, tectonic plates shift, and rocky coastlines trace the majestic outline of our state's rich natural history. Starting Friday, June 15, visitors to the California Academy of Sciences will discover the giant wonders that make Northern California like nowhere else in the world at Giants of Land and Sea. In this brand new exhibit filled with larger-than-life interactives, visitors will experience the epicness of the state’s iconic landscape—a place of constant change where people and climate are shaping the future. Giants of Land and Sea also celebrates California’s rich cultural diversity and will be interpreted in several different languages, including English, Spanish, Chinese, and Filipino.

“California’s coastline is home to some of our planet’s most extraordinary ecological interfaces, where ocean currents and upwelling meet a geologically active landscape to create unique ecosystems rich in biodiversity,” says Dr. Shannon Bennett, the Academy’s Chief of Science. “As scientists, it provides a living laboratory to study some of Earth’s most treasured systems at a time when our planet faces unprecedented environmental change. And as proud Californians, it provides a place of wonder, awe, and inspiration to be protected, celebrated, and sustained for future generations.”

As the tallest trees on the planet, coast redwoods earn their giant reputation by standing at astounding heights of up to 380 feet. Found only in a narrow region along California’s coastline, these majestic yet vulnerable marvels provide a critical learning opportunity for scientists looking to understand their evolution over millions of years and their resilience in the face of a changing climate. An intimate, multimedia experience will invite visitors to virtually ascend from the forest floor to the treetop canopy alongside scientists who brave incredible heights to study the complex ecological structure and charismatic wildlife that make these mighty giants their home. Standing face to face with a real 8,500-lb. cross-section from a fallen ancient redwood that took root around the year 1200, visitors will use a digital touchscreen to “read the redwoods” while examining its tree rings to learn about key periods in the tree’s life. In partnership with Save the Redwoods League, visitors will also learn about coast redwood ecology and local conservation efforts.

Plus, visitors can step inside an immersive fog room to feel the chill and hear the sounds of San Francisco’s fabled and ever-present neighbor that captivates both locals and visitors alike. They’ll learn how fog helps to create a cool climate that nourishes coastal redwoods and their forest environments and watch a mesmerizing timelapse of coastal fog rolling across the Golden Gate Bridge and blanketing the San Francisco Bay in its daily ebb and flow.

Northern California’s unique natural history starts far below the surface as notoriously active tectonic plates that have shaped both the geography and modern history of the Bay Area continue to impact our lives today. A reimagined Shake House—made popular in the Academy’s former Earthquake exhibit—returns with a new look and feel as visitors experience the rumbles and jolts of the 1906 and 1989 earthquakes that shook the Bay Area. After exiting the earthquake simulator, interactive displays will invite visitors to learn more about the modern influence of historic quakes and practical tips on how we can all stay prepared and safe during a seismic event.

As mighty as the ancient redwoods that line our coast, marine mammals migrate to and from California’s protected and productive waters each season, finding food and shelter in the cold, nutrient-rich waters. Overhead in the exhibit, visitors can take in the enormity of a massive blue whale skeleton and explore more than a dozen articulated marine mammal specimens and skulls, including dolphins, whales, seals, sea lions, and more to learn how marine mammals have evolved over time to glide through water, dive deep, and haul out on shore. Plus, visitors can compare the somewhat surprising similarities between their own human anatomy and marine mammals through a touch-activated, light-up interactive.

The exhibit will also explore the Academy’s marine mammal rescue work, done in collaboration with a group of local partners that make up the Marine Mammal Stranding Network. Videos and specimens will take visitors to the scene of a stranding event to discover what scientists learn by studying injured or deceased mammals that wash up on local shores and how this information informs conservation decisions on a global scale. Stories throughout the exhibit highlight our human connection to coastal food webs, including how citizen scientists are working to document and understand the impact of our changing ocean ecology using the iNaturalist app, powered by the Academy and National Geographic Society.

In a region known for groundbreaking innovation, some of today’s most promising sustainability solutions have their roots right here in the Bay Area thanks to creative partnerships between local Californians, Native tribes, and scientists from throughout the state. From crowd-sourced citizen science projects that document emerging patterns in local biodiversity in real-time to a collaboration between the Yurok Tribe and scientists that helps steward ancestral lands, revitalize culture, and restore salmon habitat—visitors will hear from a diverse range of California voices working to sustain the precious and critical ecosystems in their own backyard.

The Academy will also launch several California coast-themed daily public programs in support of this new exhibit and a special Golden State NightLife event for adults 21+ on Thursday, June 14, co-presented by Save the Redwoods League.

Giants of Land and Sea is generously supported by the Gordon and Betty Moore Foundation, Pacific Gas & Electric Company, and United Airlines.

The California Academy of Sciences is a renowned scientific and educational institution dedicated to exploring, explaining, and sustaining life on Earth. Based in San Francisco’s Golden Gate Park, it is home to a world-class aquarium, planetarium, and natural history museum, as well as innovative programs in scientific research and education—all under one living roof. Admission to the Academy is: $35.95 for adults; $30.95 for youth ages 12 to 17, Seniors ages 65+, and students with valid ID; $25.95 for children ages 4 to 11; and free for children ages 3 and younger. Admission fees include all exhibits and shows. Hours are 9:30 am - 5:00 pm Monday - Saturday, and 11:00 am - 5:00 pm on Sunday. During peak periods, including holiday and summer weekends, extended hours and peak pricing may apply. Visit www.calacademy.org or call (415) 379-8000 for more.