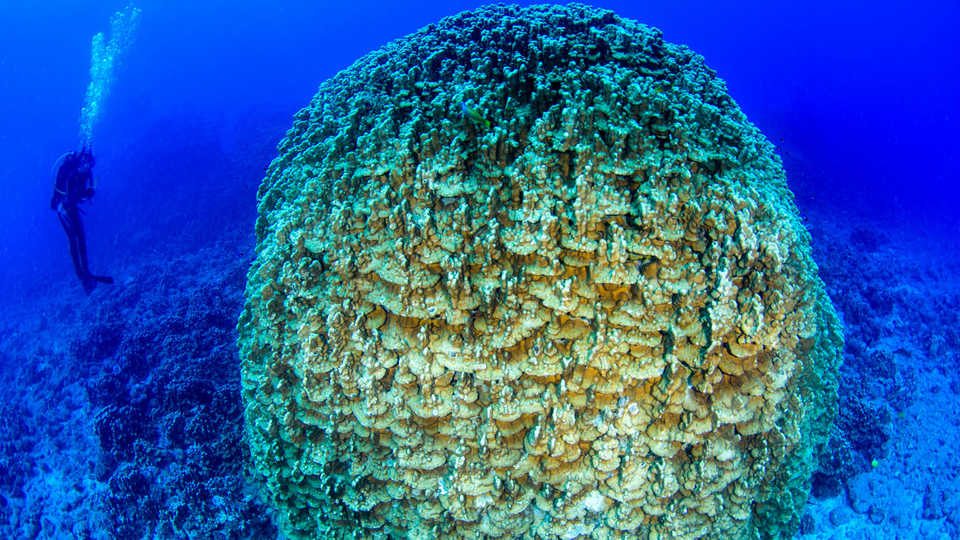 An unprotected coral head off of Easter Island, Chile will now have a chance to be integrated into a recently created MPA. [Luiz Rocha © 2017 California Academy of Sciences)

SAN FRANCISCO (December 14, 2018) – Scientists from the United States and Brazil warn that the current global progress toward United Nations (UN) sustainability goals is not fast enough to avert the biodiversity crisis. A scientific team led by the California Academy of Sciences evaluated progress toward current biodiversity targets put forth by the UN Convention for Biological Diversity specifically aimed at protecting the world’s oceans and seas. In an essay published today in Perspectives in Ecology and Conservation, they argue that most signatory countries are not on track to achieve target goals, some of the targets are structured to give a false sense of conservation achievement, and that these targets must be restructured to incorporate adequate conservation incentives that instill valid hope for the future.

“We want to call attention to the fact that while the commitments of signatory parties to UN sustainability goals are important and necessary, they’re also overlooking critical conservation challenges,” says lead author and Academy postdoctoral researcher Dr. Hudson Pinheiro. “We want policy leaders to recognize that some targets need to be reassessed and improved in order to optimize the sustainability of the world’s marine ecosystems and make real progress towards averting the biodiversity crisis.”

In their assessment, the team considered the Paris Accords, which includes 17 Sustainable Development Goals (more specifically SDG-14, which deals with ocean issues), and the Aichi Biodiversity Targets (Target 11 to protect 10% of the ocean by 2020). These goals are continually promoted by the UN Convention for Biological Diversity and signatory countries, which most recently convened in Egypt last week.

One sustainability target highlighted by the team requires signatory countries to protect 10% of their coastal waters as marine protected areas, or MPAs, by the year 2020. However, many countries are protecting large expanses of ocean that are low-conflict and of little biological diversity—rather than focusing on coastal regions most in need—in order to meet the target.

“Near-shore waters have a greater diversity of species and face more immediate threats from energy extraction, tourism, development, habitat degradation and overfishing,” says Dr. Luiz Rocha, Academy co-leader of the Hope for Reefs initiative, who in a New York Times op-ed last year argued that the establishment of a large, open-ocean MPA in Brazil was well-intentioned but significantly flawed. “If we leave these highly vulnerable and biodiverse places at risk, we’re not really accomplishing the goal of protecting the seas.”

To dissuade countries from protecting large swathes of ocean habitat that favor low-conflict, low-diversity areas, the team recommends dropping the numerical target of protecting 10 percent of a country’s marine territory. Instead, countries should focus on protecting the highest number of species and ecosystem types to better align with end conservation goals.

The team also evaluated sustainability targets that aim to minimize the impacts of ocean acidification on marine ecosystems by slowing greenhouse gas emissions. They note that, in order to reduce fossil fuel consumption to meet these targets, many countries have turned their focus to expanding “clean” energy sectors, like hydroelectricity, that still depend on environmentally polluting practices.

The team supports several adaptive management approaches, including encouraging industry leaders and local governments to promote policies that further marine conservation despite the position of their respective national governments. For example, the California Academy of Sciences became the first major museum to sign onto the Paris Accords last year when the federal government refused to commit, and the states of California and São Paulo are advancing at a much faster pace to reaching targets than their home countries (United States and Brazil).

“Investment in education and outreach is essential,” says Pinheiro. “Now is the time for scientists, managers, and stakeholders to work together to defend marine biodiversity, ecosystem services, and resources that the world depends on. And it starts with a critical re-evaluation of sustainability targets, how they are being met, and how they motivate marine conservation.”

For a more detailed evaluation of current challenges—and hopeful recommendations—presented by the team, read the full perspective.