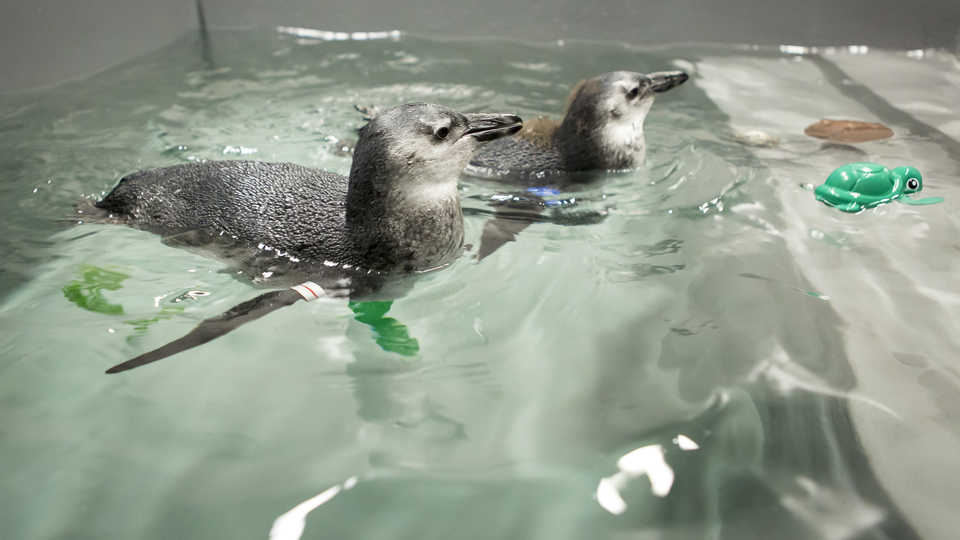 African penguin chicks in "fish school," where they learn to swim and eat fish from a biologist before joining adult birds on exhibit.

SAN FRANCISCO (May 11, 2018)—On Wednesday, biologists at the California Academy of Sciences introduced two endangered juvenile penguin chicks to the popular African penguin exhibit. Rudo and Rufaro, both males, were hatched just days apart on January 31 and February 2, respectively. Their names, Rudo meaning “love” and Rufaro meaning “happiness” in the Shona language, were chosen by Academy biologists. After several months of bonding together behind-the-scenes, the chicks have learned to swim and eat fish from a biologist to prepare them for joining 14 adult birds in the Academy’s bustling colony. Viewers can meet the penguin chicks during a special Mother’s Day live stream via the Academy’s Facebook page at 9 am PT on Sunday, May 13.

“Every hatch represents a conservation success for the endangered African penguin species,” says Brenda Melton, Associate Director of Steinhart Aquarium at the California Academy of Sciences. “We hope visitors will enjoy meeting our newest aquarium residents and are inspired to learn more about what they can do to help protect this endangered species for future generations.”

The Academy has a long and successful history of breeding African penguins as part of a Species Survival Plan (SSP), a collaborative breeding and exchange program among partner institutions accredited by the Association of Zoos and Aquariums (AZA) dedicated to maintaining genetic diversity in the resident population of African penguins. African penguins were classified as an endangered species in 2010 and are at high risk of extinction in the wild, so breeding programs like this are critical to the sustainability of this species.

Both Rudo and Rufaro share the same biological parents, an SSP-recommended pair. However, in the formative weeks just after their hatch days, Academy biologists made the decision to foster the chicks after observing that their biological parents were unable to care for them properly during this delicate stage. In the weeks that followed, the chicks were each raised and cared for by a pair of “foster birds” in order to ensure that they had the best possible chance to thrive in the colony. Personalized care plans are developed for each new African penguin chick as part of the Academy’s animal care and well-being programs.

In addition to working to sustain the resident population of African penguins within zoos and aquariums, Academy biologists also further this sustainability work in the field, traveling to South Africa to hand-rear chicks abandoned by their parents and introduce these penguins back into the wild as part of the Academy’s partnership with SANCCOB, a leading conservation organization.

Wild penguin populations in South Africa and Namibia are in trouble due to threats from historic guano harvesting, habitat loss, and overfishing, leaving penguins struggling to raise their young without a secure home. In 2017, the Academy partnered with AZA’s Saving Animals From Extinction (SAFE) initiative on the Invest in the Nest project to place over 1,500 artificial nests in Africa. The Academy is currently displaying nest prototypes on the museum’s living roof, where temperature and humidity inside the nest boxes has been monitored as part of the project to ensure that they can provide a comfortable home for penguins in the wild.

Keep up with the Academy’s African penguin colony via the live HD Penguin Cam, where feedings are broadcast twice daily at 10:30 am and 3 pm (PST). The Penguin Cam is available online or by downloading the Pocket Penguins mobile app.