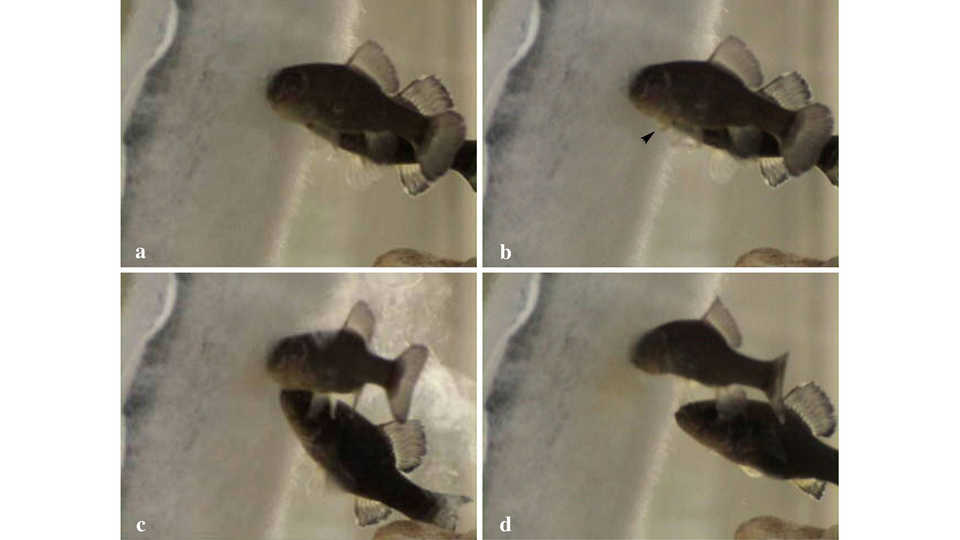 Three papers recently have been published in regard to pirate perch reproduction, each with their own relevant contributions. The first report involved direct observations of the complete spawning sequence, and the reports of branchial brooding and nest building were not supported by the numerous observations of spawning (Poly and Wetzel, 2003; see figure above). The first of the subsequent papers concerning pirate perch reproduction (Fletcher et al., 2004) had field observations of spawning sites that agreed with the information given in Poly and Wetzel (2003). However, Fletcher et al. (2004) did not observe how spawning was achieved and speculated as to how pirate perch were depositing eggs even though this information was published earlier (Poly and Wetzel, 2003). Tiemann (2004) added that males and females differed in several body measurements and reported "nest-building" by pirate perch based on a "pit" or "nest" in an aquarium as support that pirate perches are not branchial brooders, which had been demonstrated previously. However, Tiemann (2004) did not observe the construction of any "nest" nor did he observe any spawning acts (directly nor on videotape). Also, in his study the aquaria contained other fish species, such as Lepomis macrochirus and Lepomis gulosus, that could have made the supposed "nests". The alleged "pits" or "nests" can result from burrowing action of female (not male!) pirate perches depositing eggs into the substrate, when roots or other preferred spawning materials are absent (see Poly and Wetzel, 2003, p. 156). Female pirate perch vigorously push their snouts into the substrate to lay eggs (= normal behavior); however, when females do this in gravel, they create furrows or pits that remain even after the act is complete (Poly and Wetzel [2003] observed this behavior directly). The resultant depressions are not produced by any excavating activity (i.e. moving material in mouth, with caudal fin, or by fanning with pectoral fins) nor are eggs contained within the volume of such structures but rather have been injected into the interstitial spaces of the gravel. Such a method for deposition, when it leads to successful development of embryos, is more analogous to a redd made by salmonids than it is to a nest made by sunfishes, sticklebacks, and catfishes. A nest implies intentional movement of material often with some degree of sanitizing. Therefore, we argue Tiemann's single "observation" of a "nest" should not be construed as evidence supporting "nest-building" by pirate perch. Transbranchioral spawning is unknown for any other fishes and thus is unique to the pirate perch. Also, until ACTUAL observations confirm it, there are no other reproductive strategies besides transbranchioral spawning used by pirate perch. As stated above, direct observations of construction of a "nest" by pirate perch has never been reported. The eggs of pirate perch are non-adhesive and demersal (Poly and Wetzel 2003), although reported to be floating and/or adhesive by others (Fontenot and Rutherford, 1999; Tiemann, 2004). We consider the observations pertaining to floating and/or adhesive eggs is most likely due to fungal growth on the eggs, whether fertilized or not.

Watch a short movie of pirate perch spawning in an aquarium.

Note that you'll need Windows Media Player 9 to view this; older versions won't play it, but I'll try to get other options posted later. Thanks to Kenny Moore for preparing the video footage!