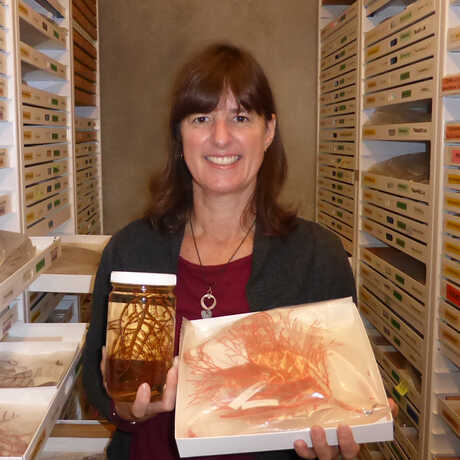 Chrissy Piotrowski is responsible for the care and maintenance of a vast, taxonomically diverse invertebrate research collection (excluding entomology specimens).  She oversees all collections-related activities and documentation: acquisitions, curation, taxonomic determinations, loan and exhibit of specimens, research visits, inquiries, and maintenance of an online searchable database of digital specimen records. She manages invertebrate lab staff and volunteers on a diversity of projects to enhance and maintain the CASIZ Collections and associated data to serve current and future generations of researchers.

Chrissy has been with the California Academy of Sciences since 2000, the year her interest in polychaete taxonomy was piqued by work on a benthic survey of San Francisco Bay. Her efforts to document bristleworm and other invertebrate fauna of the Bay culminated in co-authorship of a field guide for SF Bay benthic marine animals. She has since broadened her interests to include general invertebrate taxonomy, cryptic marine species, and marine introductions. Recent survey work in the Indo Pacific resulted in the description of several new polychaete species and inspired collaborative work on a published list of species described from the region. Her current work aims to create genetically useful morphological specimen collections for the study of polychaete faunal diversity, with a focus on exploration of allopatric populations of reportedly “cosmopolitan” species.